As part of our special series on higher education Anna Zimdars reflects on the government’s Higher Education reforms and explores the possibility that, under the new fees regime, the US and English systems are converging. While there are definitely trends in this direction, it is notable that US higher education places a much greater emphasis on the potential for personal growth rather than simply education attainment.

Even with the progressive salary linked repayment system of the 9k tuition fees, the higher fees level in England have arguably moved England further towards a US model of higher education than the continental European.

Across the English Channel, it is still possible to get educational bargains. Free tuition, for example, is available and some German states or fees levels are relatively modest as illustrated by indicative fees of 1k in Italy. In Sweden, they even pay students to go to university. In contrast, tuition fees, in the US – especially at private universities – can reach much higher levels than the 9k in England. The English move towards US-style fees raises the question: What about other aspects of the US higher education admissions system? Do we see a convergence here? In this article I will explore some of the issues raised by the highly selective admissions processes in the two countries and argue that there is some convergence but also continued differentiation in the admissions system. I conclude by making the case for seeing the higher fees as an opportunity to re-think the role of universities and the curriculum within them.

In the last few years, I have interviewed individuals who work in admissions offices at Ivy League universities in the US  about the way the admissions process works. This is an example of a typical response:

when we look at applications, there is the academic half of who they are. And then, there is the kind of – the other side of them. Who they are as a person. And what they do with themselves and those kinds of things. And they are equally important in the application.

The Ivies use holistic assessment of the person as an individual as well as their academic attainment in making their admissions decisions. In 2006, I also interviewed academics at a highly selective English university. Here, the view was quite different as one selector explained:

I don’t care if they [applicants] are a good person. I care whether they do the course well. You look at American references and they are all about ‘being good’. I simply want to admit on academic grounds … and I think it is corrupt to take into account the character of a person or whether they play netball for the University.

While fees levels in England might be moving more towards US fees level and both countries consider academic attainment of utmost importance, there is still a deep ocean separating attitudes towards non-academic aspects of an application in the two university admissions processes. The welcome move towards contextual data in England is also a holistic evaluation technique, but even contextual data does not delve into the ‘character’ and other accomplishments of a person in the way US applications do. Which, incidentally, is just as well given the exclusionary tendencies the use of character has had in university admissions.

However, the view across the Atlantic is interesting not least because it raises a more fundamental question: What is the purpose of universities? Clearly, the implicit answer differs in the admissions models in England and the US. The point of the US system is – in the words of an Ivy league admissions office – ‘…to educate people to do something great with their lives. And that is more than being a very good student.’  In contrast, in my English interviews, the focus was much more on ability and potential to achieve highly at university, with selectors looking ‘for people keen to study [their degree course] and evidence that they really like it’.  There is no trans-Atlantic convergence in the purpose of the admissions process in these quotes.

A natural follow on question would be to consider the impact of the transatlantic differences in the purpose of admissions. Does it matter whether a holistic model or an attainment and potential based system is used for selecting students? This question was posed by Robert Sternberg, Professor of Psychology and Provost at Oklahoma State University, who has spent decades researching aspects of university admissions:

We are doing [admissions] in some respects wrong. And here is why I think we are doing it wrong …  if you look at the current economic crisis in Europe … and you look at the economic problems in the United States, as well as the political problems in my own country [the US], in a country where one candidate has a degree from Harvard, another candidate has two degrees from Harvard, another candidate is a former college professor, another candidate is a doctor – all of these are candidates for the current presidency – one begins to worry. If all these people have such great degrees – in Europe, the United States, in other places, and if they have been educated so well, and if they are so smart in a conventional sense, how has the world gotten into the mess it is in today? In the United States, the failed banks like Lehman Brothers, recruited only at the very top universities in the country. And, yet, the management was so bad that the banks failed. So, what’s missing?

Sternberg raises an absolutely key question about university admissions – what is it doing for societies at large?  And to the graduates from selective, sought-after universities provide us with common benefits (see also Rawls)? But while I completely agree with the importance of the ‘Sternberg question’; I only party agree with Sternberg’s solution. His solution is to admit students on even wider criteria by further extending the use of non-grades-based admissions. The problem I see is that this model further pushes the view of university selection as being a ‘modelling contest’. And modelling contests are won because aspirants already have all the required characteristics of what we want to see in successful people.  This view seems unintentionally disempowering for the process of university education, although perhaps not entirely unjustified. I would argue that it is at least of equal importance to use the higher fees in England to think about the wider purpose and role of universities and about what universities actually do once students are enrolled. What aspects of curricula allow individuals to develop a greater sense of personal responsibility and ethics? How can universities not merely select ‘the best’ (however defined) but also help their students to contribute actively to a ‘better civil society’?

As students are paying 9k tuition fees now, they will hopefully start asking questions not only with regards to the employability and economic value of their degrees. Hopefully, they will also ask how universities will offer a space for experiencing new things, for having their point of view challenged, for reflection, for creativity – and also whether university is a place for instilling or consolidating values that benefit society at large once they graduate.

There are real challenges posed by the 9k fees from a social justice and social mobility perspective. But there is also a real opportunity here for universities to re-think their purpose and their curricula and to think of the sort of graduates they would like to welcome most proudly at their reunion events. So, let’s welcome back the idea of universities with a wider purpose supported by meaningful, holistic curricula.

Anna Zimdars is a lecturer at King’s College London with an interest in university access, access to professions, and social mobility. Her 2011 conference on university admissions, organized with Julian Skyrme, as well as her research on admission to the University of Oxford, were referenced several times in the Milburn report. Anna has spent research time at New York and Harvard universities and is interested in international collaborations as well as public engagement. 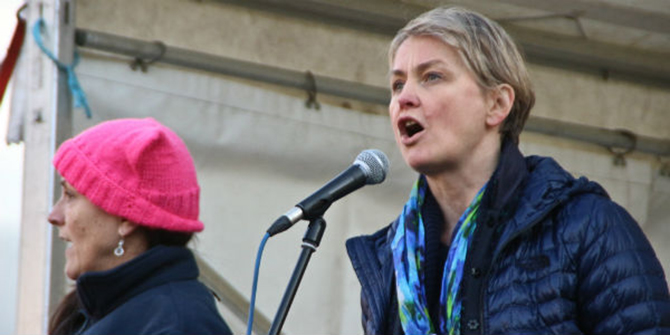