There are conflicting beliefs about the influence of parties on policy. Sceptical observers point to broken pledges and competing demands on governments’ legislative time; others decry overt partisanship. Yet, as Shaun Bevan and Zachary Greene argue, parties do draw policies towards their stated goals if they cannot complete their policy mandates.

Studies of partisan influence show that parties rarely pursue policies based primarily on their historical policy reputations. Important world events, the economy, and elections often shift the issues that parties address. But by changing our focus, we can counter the cynicism of past studies of party influence. Rather than making direct predictions of the specific policies and issues parties pursue, we can shift the analysis to look at how stable policy is over time.

Parties’ primary ideological differences may have decreased following the advent of New Labour, but this doesn’t mean there is a limited party influence in the Westminster system. Although it is likely parties shift policy in their direction on an issue, the primary conflicts over policy suggest that the largest parties would dedicate their resources to a similar set of issues. Where differences should emerge is when parties have the opportunity to develop policies linked to current constituents and party supporters, especially when the conditions are most supportive.

For our analysis we examined Acts of Parliament over the past 65 years, focusing on the effect of three main factors on the relative stability of policy: parties’ memberships; economic conditions, and the size of the parliamentary delegation. We found that after transitions in the governing party, increased membership and parliamentary delegation  stabilised policy issues, but poor economic conditions destabilised them.

The Effect of Party Membership Numbers

Figure 1 demonstrates the influence of party membership size (logged). Numbers of party members have generally decreased over time but there’s relatively large variation across the years. The presence of a large membership arguably presents parties with a diverse set of demands across issues and that can have a real influence over the choice and support of party leaders. We expect that larger memberships cause greater policy stability between elections. This is because the amount of legislative resources dedicated to issues are relatively split across diverse goals. Leaders in parties with small memberships have to respond more quickly to shifts in any specific constituency’s demands or risk challenges in the future. 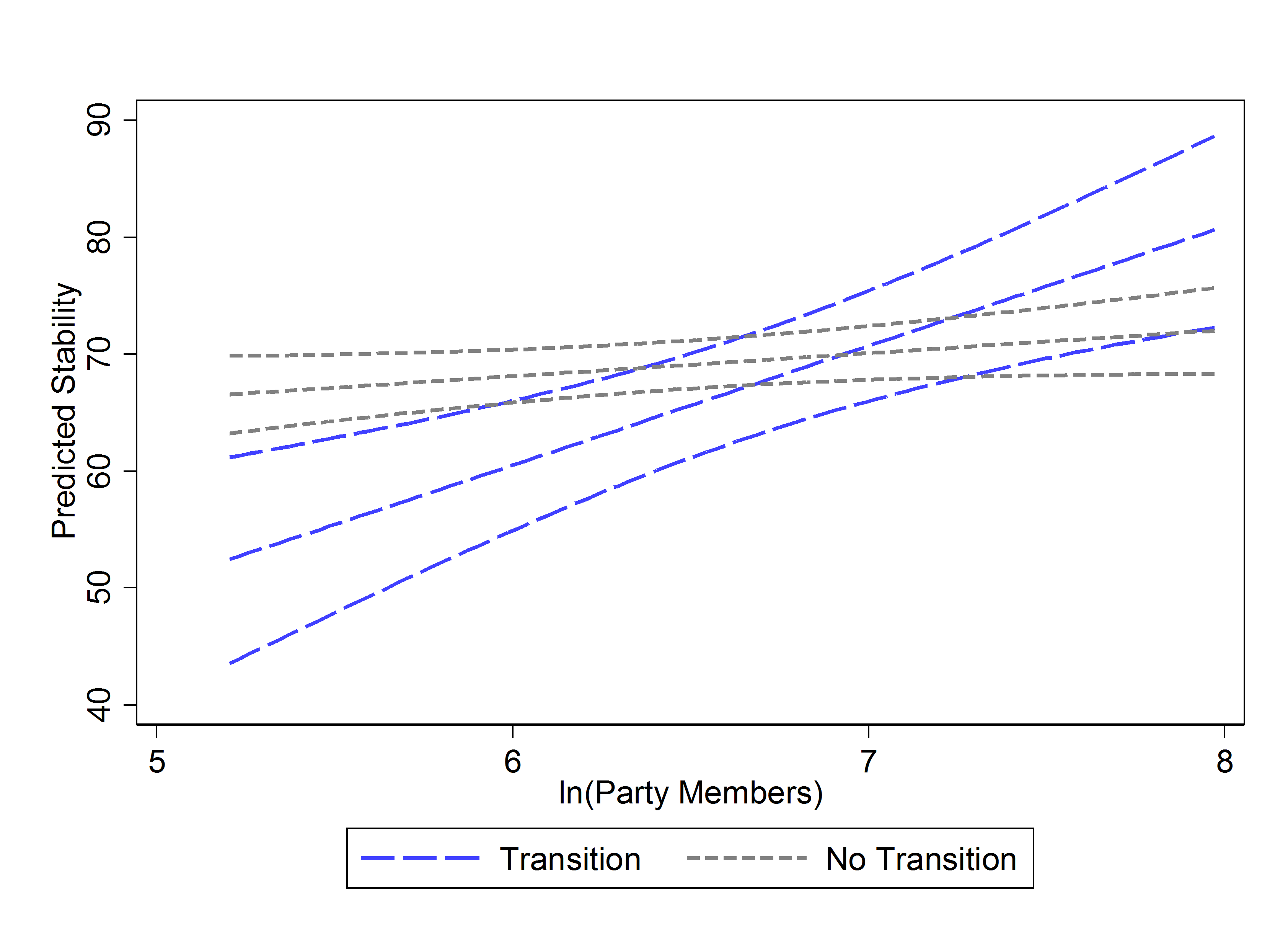 As Figure 1 shows, there is a clear positive relationship between party membership size and agenda stability. The effect is clearest for the first year following a partisan transition; when parties have larger memberships, the agenda is more stable following a change in government. This evidence matches the experience of Tony Blair in 1997 whose party faced a large increase in its party membership before taking power. Although the party shifted its positions on a number of issues it also picked up issues of longstanding importance to the previous Conservative government.

The effect of economic conditions

We also expect economic conditions to introduce alternate incentives for parties to develop policy. While conservative parties such as the Tories emphasise liberalising markets and privatisation to stimulate economies, left-leaning ones (e.g. Labour) stress direct government investment and support for worker groups in their election campaigns. These differences are most likely to emerge when the economy is in need of support.

Indeed, as Figure 2 shows, the effect of the economy is clearest immediately following a partisan transition. The economic misery index combines information about the unemployment rate and inflation; higher numbers indicate a worse off economy. Immediately following a party transition, poor economic performance leads parties to dramatically shift their attention on policy relative to transitions that happen in a better economic context. This result is consistent with the explanation that when new parties come into office in poor economy conditions, they scramble around for alternate policies to address the economic issues. Further, there is a small positive increase for parties during non-transition. And so this suggests that, in comparison, incumbent governments double-down on their policy prescriptions as economic conditions decline. 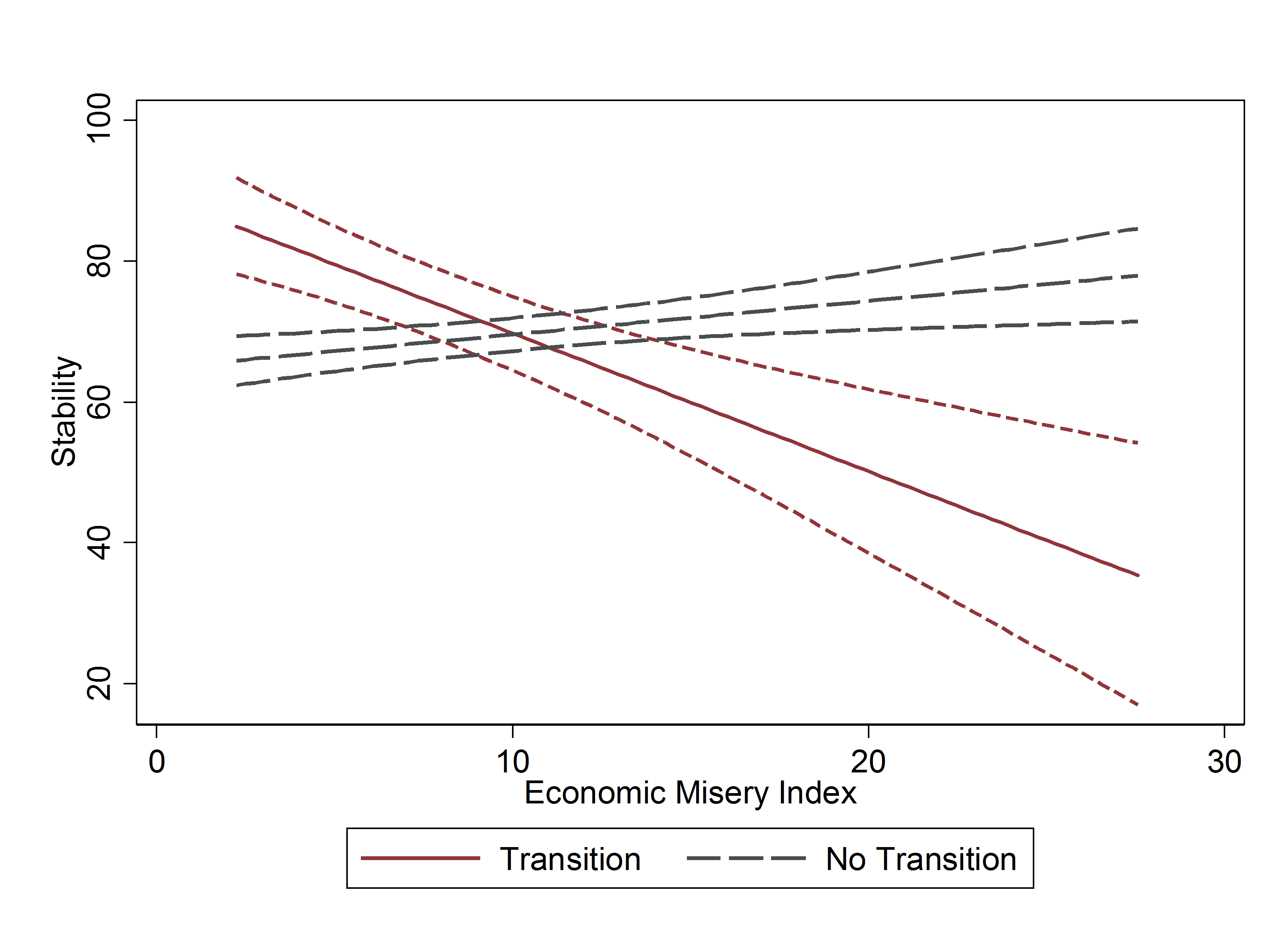 The Effect of Parliamentary Majority Size

While both party membership and economic conditions indicate the incentives parties have to address alternate policy agendas, cabinets’ parliamentary strength reflects their ability to implement policies without having to negotiate with diverse intra- or inter-party groups. In the strong-party Westminster system, the executive has many tools to maintain the appearance of parliamentary unity. However, the increasing use of free votes such as the vote on the Marriage (Same Sex Couples) Act 2013 indicates that real intra-party disagreements exist in the House of Commons. Although MPs rarely openly rebel from their party’s positions, the executive must still negotiate policies within the party to ensure their support. Once the leader has a majority from within the party, the rest of the party will likely follow suit. Negotiations require time, a limited resource in parliamentary terms.

This logic leads us to predict that cabinets with smaller legislative majorities will be less able to dramatically shift the parliament’s agenda. Consistent with these predictions, Figure 3 demonstrates that the cabinet’s seat share in the House of Commons determines the stability of the policy agenda. Immediately following a partisan transition, larger parliamentary delegations lead to more immediate policy change, perhaps reflecting greater support for their mandate. In non-transition years, larger delegations bring greater stability. 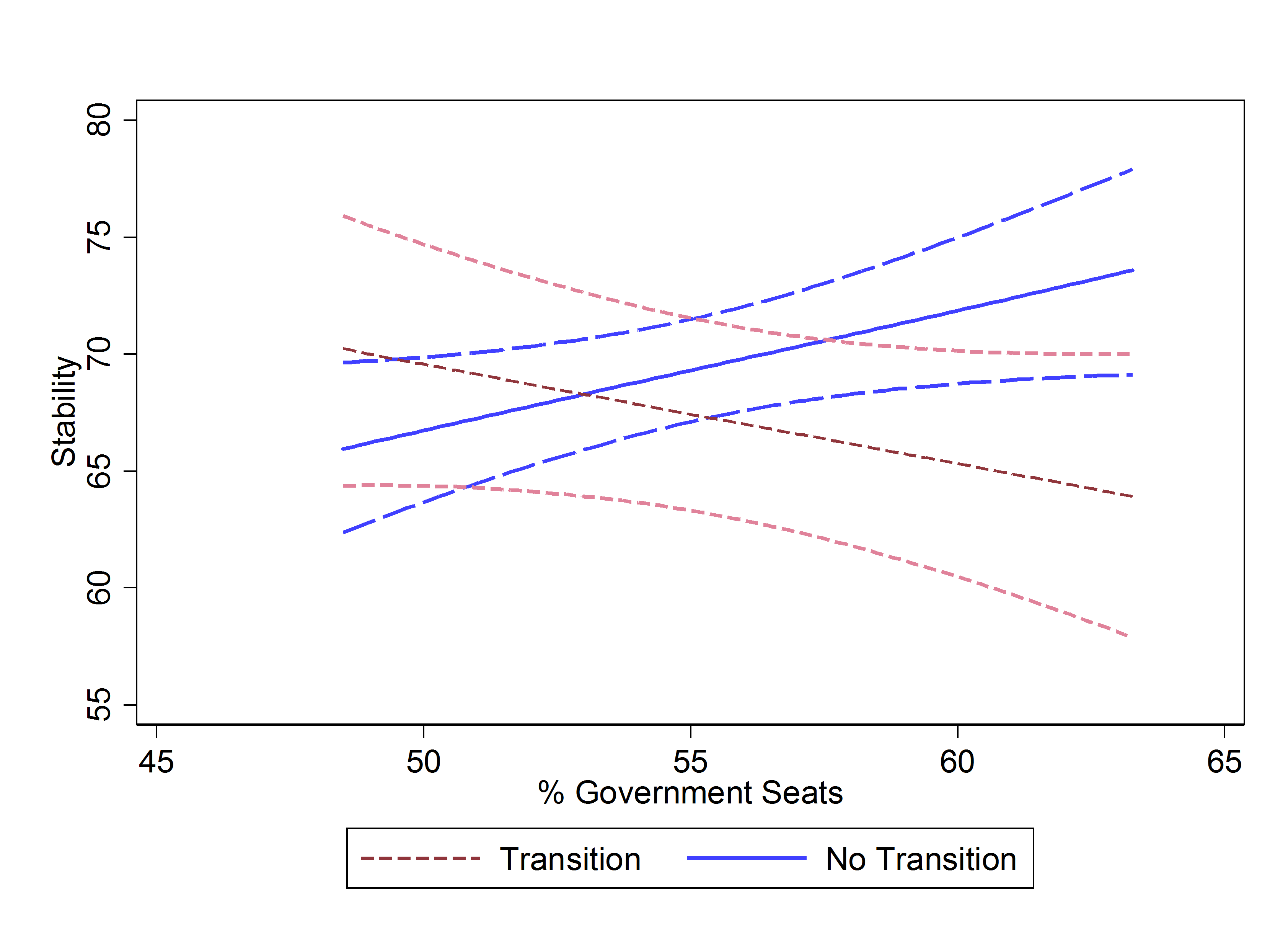 Our research points to explanations for scepticism and optimism for parties’ likelihood of following through on campaign promises on diverse issues. Although we have not tracked the exact promises or positions parties take, we find evidence that a change in parties’ presence in office has real consequences for policy following transitions and during parties’ tenure in office. Further, the incentives for and constraints on large policy shifts show that parties behave largely as we might expect them to upon entering office.

There is little reason for parties to take on alternate issues when the reforms they are looking to make are on the same topics that the outgoing government had emphasized. These findings further suggest that increasing divisions within both the Conservatives and Labour over such diverse policies as Brexit, Trident, or foreign interventions in Syria might lead to less policy change overall as Westminster’s tools for maintaining party unity are less capable of coercing MPs to stick to the party’s line.

Note: this blog draws on the journal article: “Looking for the Party?  The Effects of Partisan Change on Issue Attention in UK Acts of Parliament” European Political Science Review 8(1): 47-72.