Inequality is widely accepted as inevitable today, with disagreement confined to the desirability of redistributive action, its extent, and the role of government in the process. It is taken for granted even by the most progressive (and contentious) calls for high taxation on the top income earners, which aim to mitigate its effects.

But why has inequality been naturalized? This is where influential master-narratives of the market are so consequential in shaping public beliefs—from the 1970s anti-tax narratives that frame government intervention as a violation of free market principles to the original text that defined market discourse, the Wealth of Nations itself. Adam Smith is assumed even by his most progressive interpreters to have accepted inequality as the necessary trade-off for a more prosperous economy. This is, in fact, the default assumption. 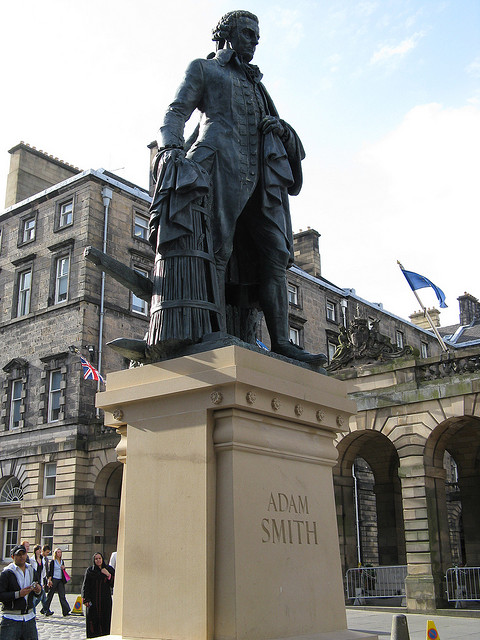 But the assumption is wrong. As I show in my article, the building blocks of Smith’s economic system do not allow the concentration of wealth—not due to normative constraints, but to how the blocks are set up in his theory to maximize the “wealth of nations.” Further, even in neo-classical economics, in a competitive economy with no entry barriers, profits should decline over the long term, so profit concentration is not an equilibrium prediction. Yet high firm profits, for instance, are treated as a sign of economic success that have to be sustained over time. These tensions have never been conclusively settled in economics.

Only recently have we seen a powerful position staked out on the need to avoid such inequalities from arising in the first place, and to implement “market reforms that encourage a more equal distribution of economic power and rewards even before government collects taxes or pays out benefits.” This is the idea of “pre-distribution,” advanced by the American political scientist Jacob Hacker and incorporated in the new Labour agenda for policy. It remains a programmatic position, however, a prescription of how the market should be structured to ensure more equal outcomes. It could thus easily be identified as purely a normative position with an egalitarian goal—two elements, however, that non-progressives will reflexively reject.

The important point about Smith’s system, on the other hand, is that it precluded steep inequalities not out of a normative concern with equality but by virtue of the design that aimed to maximize wealth. Once we put the building blocks of his system together, concentration of wealth simply cannot emerge. In Smith, profits should be low and labor wages high, legislation in favor of the worker is “always just and equitable,” land should be distributed widely and evenly, inheritance laws should partition fortunes, taxation can be high if it is equitable, and the science of the legislator is necessary to thwart rentiers and manipulators. Political theorists and economists have highlighted some of these points, but the counterfactual “what would the distribution of wealth be if all the building blocks were ever in place?” has not been posed. Doing so encourages us to question why steep inequality is accepted as a fact, instead of a pathology that the market economy was not supposed to generate in the first place.

The key principles of Smith’s system work against the concentration of wealth—they also speak to the top issues in economic policy today: profits, taxes, and the minimum wage. First, Smith thought high profits denoted economic pathology. The rate of profit, he said, was “always highest in the countries which are going fastest to ruin.”  The record-breaking corporate profits during the current crisis would not have surprised him. This pathology was not simply a symptom of mercantilism, but resulted from the incentives on the economic groups living by profit alone.

Unlike Ricardo, Smith believed the interests of profit-seekers were structurally and thus permanently “directly opposite to that of the great body of the people,” because “the rate of profit does not, like rent and wages, rise with the prosperity, and fall with the declension of the society. On the contrary, it is naturally low in rich, and high in poor countries” (with a few exceptions, especially new economies). Accordingly, when the economy is sound, wealth concentration should not occur. Only when profit-seekers have rigged the system through legislation do concentrations occur. Throughout, as I show, Smith states his expectation that fortunes would, indeed, not be high and that in any case they were prone to dissipation. Such a system cannot generate steep inequality.

Wages, at the same time, should rise with increased wealth. On this basis, Smith defends adequate labor wages, which had to be at least sufficient to provide the “necessaries,” covering lodging, food and clothes, the latter tailored to middle-class comforts. This baseline appears minimal, yet it provides for more than is covered by the contemporary minimum wage. In fact, a crude calculation suggests that Smith’s principles would set the wage floor at about $25,000, more than double its current level. Moreover, high wage levels should occur naturally. Wages are only lowered artificially, through state intervention, because of the sophistry of merchants and manufacturers who are much more adroit in manipulating legislatures to pass laws in their favor. Moreover, employers enjoy a bargaining advantage over workers and can coerce them to accept worse terms, because they need individual workers less than individual workers need employment. It is no surprise Marx was an admirer. Wages are not the simple product of supply and demand in Smith; bargaining asymmetries are key.

Taxation is perhaps the most contentious topic today, with prescriptions of punitive levels as the main instrument applied to reverse inequality. As such, it is seen as a distorting intervention in the market and a departure from “free market” principles. Smith did not prescribe punitive taxation, but what is missed is that he praised the British tax system though it imposed double per capita taxes than the French. Yet, “The people of France…are much more oppressed by taxes than the people of Great Britain.”  Why?  Because taxes were less equitably distributed, falling disproportionately on the poor.

A fair distribution of taxation was key to the soundness of the English economy in Smith. The rich, he claimed, should be taxed “something more than in proportion” to their wealth.  “The inequality of the worst kind” was when taxes must “fall much heavier upon the poor than upon the rich.”  The reasons were not moral.  Bad taxes were simply bad economics.

Taxes on necessaries, first of all, afflicted hardship on the poor, but burdened far more the misguided employer who demanded them, as he would inevitably have to raise wages for workers to afford those staples.  Taxing luxuries, by contrast, did no harm and it was an added bonus that it fell “heaviest on the rich.”  Carriages, for instance, should not be taxed by weight, as this burdened the poor carrying bulk goods more than the rich transporting light luxury goods.  In this way, “the indolence and vanity of the rich is made to contribute in a very easy manner to the relief of the poor, by rendering cheaper the transportation of heavy goods.”  Trade thus prospered.

Smith’s overarching point was this: taxes were bad only when they undermined the productive use of capital.  But taxation should be used to discourage unproductive economic activities.  Landlords, for instance, charged tenants large fines for lease renewals, rather than raise the monthly rent.  This is usually “the expedient of a spend-thrift, who for a sum of ready money sells a future revenue of much greater value.” It is “hurtful to the landlord,” frequently to the tenant, but always to the community.  So it should be taxed at a higher rate.  A tax upon house–rents would also “in general fall heaviest upon the rich,” a welcome outcome, since rent was an unproductive expense; when high, it was simply a luxury.  And when Smith advocated against a tax, it was for pragmatic reasons, as with taxing capital: capital holdings could never be verified and could always flee the country, so taxing them was counter-productive.  But ground-rents should be taxable, as “Nothing can be more reasonable than that a fund which owes its existence to the good government of the state” should be taxed more than in proportion to its benefit.

So who was to blame for bad taxes and bad policies?  Smith reveled in showing how “those who live by profit,” namely the merchants and manufacturers, the dealers and bankers, habitually mislead the public, often by imposing higher taxes on the workers—foolishly not realizing that ultimately they would bear the real cost.  They were also responsible for convincing gullible parliaments that high wages were bad.  Legislators should always beware of the sophistries of employers, who, for instance, blame rising wages, yet “say nothing concerning the bad effects of high profits. They are silent with regard to the pernicious effects of their own gains. They complain only of those of other people.”

Much like many progressive critics of current inequality, like Stiglitz, Krugman, Hacker and Pierson and others, Smith targets rentier practices by the rich and powerful as distorting economic outcomes. And although he strongly criticizes some regulation, I show that it is regulation favoring the rich and powerful that he attacks. The concern with the welfare of the laboring poor is palpable throughout the book. As is the awareness of “the insolent outrage of furious and disappointed monopolists” that endangers anyone willing to thwart them. Progressive concerns are therefore neither a departure nor a distortion of the original classical liberal vision and nor is the latter conservative: in fact, Smith encourages us to ask even more forcefully why inequality is accepted as inevitable, not out of concern with equality, but to secure the economic growth of nations, not just groups.

Deborah Boucoyannis is Assistant Professor at the Woodrow Wilson Department of Politics at the University of Virginia. Previously she was Lecturer in Social Studies and Olin Predoctoral Fellow at Harvard University. Her PhD is from the University of Chicago. Her interests lie in the historical and theoretical foundations of liberalism. Her personal site is http://dboucoyannis.weebly.com/