New research suggests that, although many of the costs associated with living in London are similar to the rest of the UK, a minimum socially acceptable standard of living is substantially more expensive in the capital. Matt Padley summarises the findings.

Since 2008, the Centre for Research in Social Policy has published annual reports looking at what the public say is needed for a minimum socially acceptable standard of living in the UK and at what this living standard costs for a range of different household types. The Minimum Income Standard (MIS) is based on detailed discussions with members of the public about the goods and services that different households in the UK need in order to reach an acceptable standard of living that covers essential needs and enables participation in society.

Our latest research, funded by Trust for London, builds on this on-going programme of research, for the first time systematically looking at the difference in minimum costs between London and elsewhere in the UK. The research brought together groups of Londoners from different backgrounds and socio-economic groups to consider what a range of households in Inner and Outer London need for a minimum acceptable standard of living. Although many of the goods and services needed to reach this standard are the same as those elsewhere in the UK – and cost the same – there are key differences which have a dramatic impact on the minimum cost of living in London.

Some of these differences are related to prices: the price of public transport, housing and childcare all contribute to the additional cost of a minimum budget. The biggest additional cost in London, as might be expected, relates to housing, but childcare is also significantly more expensive in the capital for those who need it – a three hour nursery session in London costs more than a three hour nursery session in Stoke. Some differences are related to the unique infrastructure of London, most notably the public transport network which brings with it different and additional costs. And some of the differences are related to ways of living in the capital that are, in some respects, different from elsewhere in the UK: this is not about a minimum living standard that is higher in London, but rather reflects, for example, a lack of space for entertaining friends which may necessitate eating out cheaply more often rather than sharing a takeaway in your home.

The impact of all of these differences on what households need in order to have this minimum standard of living is stark. Figure 1 shows some of these differences for three selected household types. A couple with two children (aged 3 and 7) living in Inner London need around £164 a week (22%) more – including the cost of social rent and childcare – than their counterparts living outside of London for a minimum socially acceptable standard of living; in Outer London the figures are very similar – a family of four need £157 (21%) more each week. Lone parents with a young child under two require £134  (25%) more in Inner London and £125 (23%) more in Outer London in order to reach this minimum standard. When a private rent for a studio flat is taken into account, this living standard costs 47% more for single working-age adults in Inner London – about £131 a week more than elsewhere in the UK. In outer London, single adults need 35% more (£97 a week).

Figure 1: the additional weekly costs of a minimum standard of living in London 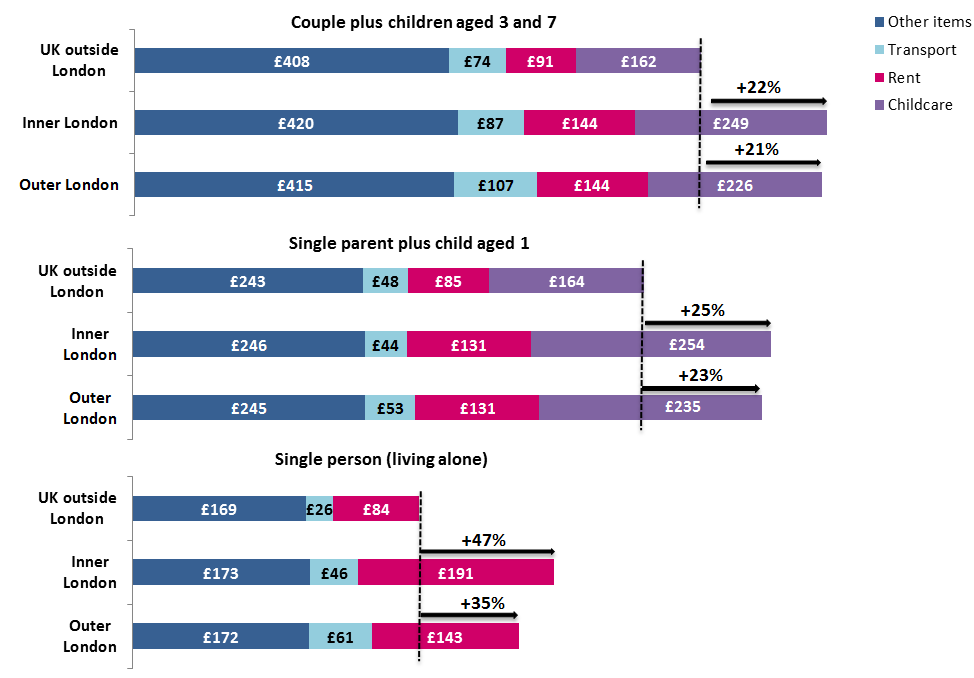 What is clear is that the cost of a minimum standard of living, as defined by the public, is higher in London. For families with children, much of this difference is driven by the additional costs of childcare, although higher transport and housing costs also contribute. For single working age adults, the higher costs of a minimum are overwhelmingly driven by housing.

These higher costs means that a minimum standard of living in the city will be unaffordable for a significant proportion of the population: we estimate that around 1 in 3 Londoners do not have the income needed for this standard of living, rising to 4 in 10 for families with children, and around 1 in 5 for pensioners. To put this another way, there are many individuals and families currently working and living within the capital who, on a daily basis, will have to make decisions about what to prioritise as they do not have enough to reach what the public define as a minimum standard of living. Reaching a minimum is particularly difficult for those working at or around the National Minimum Wage (NMW) in London, as Table 1 shows. Indeed, a single parent with one child is actually nearer to reaching the minimum budget on safety-net benefits than they are on the NMW. 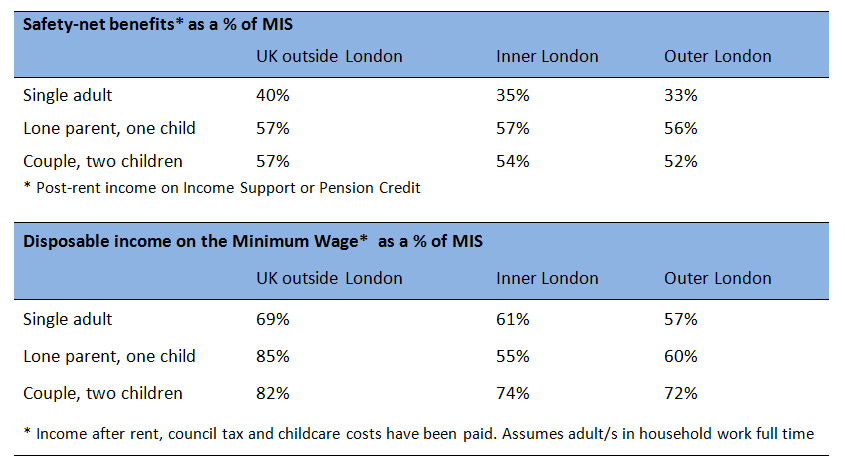 So what can be done to address the higher cost of a minimum in London, to ensure that the city remains a place where people of all incomes can live and thrive? Increasing the number of employers who are paying the London Living Wage would go some way to ensuring that more people living within the capital are able to afford this minimum standard of living. There are examples of innovative ideas to encourage the adoption of the Living Wage across London councils: for example, Brent became the first council in the country to offer firms a discount on business rates if they became living wage employers.

But it is not enough to just tackle wages. Costs need to be addressed as well, particularly in relation to housing, transport and childcare. As on the wages side, there are examples of moves that have been made to address costs: Transport for London have introduced a range of discounted and concessionary fares for people looking for work or in apprenticeships. But much more could be done. The construction of genuinely affordable homes and public investment in social housing could assist with high housing costs. Improved and increased bus routes across the city could cut the high cost of travel. An increase in the childcare offer (from 15 to 30 hours a week) could help lower the cost of childcare, but may also have a knock-on impact on maintaining low wages within this sector.

Samuel Johnson claimed that ‘there is in London all that life can afford’. What our research has highlighted is that there is much that needs to be done to ensure that as many as possible are able to afford that London life.

Matt Padley is Senior Research Associate at the Centre for Research in Social Policy at Loughborough University and a Lecturer for the Open University.