In a previous article, Rozana Himaz and Christopher Hood argued that the most recent period of public spending restraint fits into a pattern of longer but less deep government actions. In response, Geoff Tily argued that the approach ignored the macroeconomic relations in the system. Himaz and Hood respond to the comments.

In his response to our article comparing the UK’s 2010-15 fiscal squeeze episode with earlier episodes over the past century, Geoff Tily argues that when ‘macroeconomic relations are taken into account’, a rather different conclusion can be reached. Geoff Tily looks only at the spending side of fiscal squeeze (we looked at both revenue and spending) and public spending data different from those used in our analysis (we analyzed total managed expenditure while he examines government consumption and fixed capital spending). From that spending data he shows that during the 2010-15 squeeze episode there were three successive years where spending fell in real terms (meaning that growth was negative). This observation is taken as evidence to claim that the recent UK government austerity efforts were as severe as the Geddes cuts of the 1920s, contrary to what we argued.

Geoff Tily’s analysis shows that different data sources and definitions of public expenditure can lead to different conclusions – a point made long ago by Richard Rose when he wrote that ‘whether public expenditure is rising or falling is a matter of definition, not fact.’ But even so we are not convinced that the different sources and definitions of public spending that Geoff Tily uses in his analysis really support the view that spending restraint in the 2010s produced outturns as severe as those following the Geddes Axe of 1922.

It is true that both on the data we used in our analysis and on the data Geoff Tily used there were some years during  the 2010-15 episode where spending growth was negative in real terms: our data showed one year of negative growth and Geoff Tily’s data showed three successive years of negative growth. Table  1 indicates what happened to public spending on two definitions of public spending, using data from the ONS. But in both cases, those falls were small (less than 1 per cent compared to the previous year, ranging from 0.2 to 0.77) and well below the threshold we set for classifying a spending squeeze as ‘hard’ (which involved a fall in real spending   negative growth – of more than 1 per cent on average, along with a fall in spending as a percentage of GDP that was more than 1 percentage point on average, over the episode). 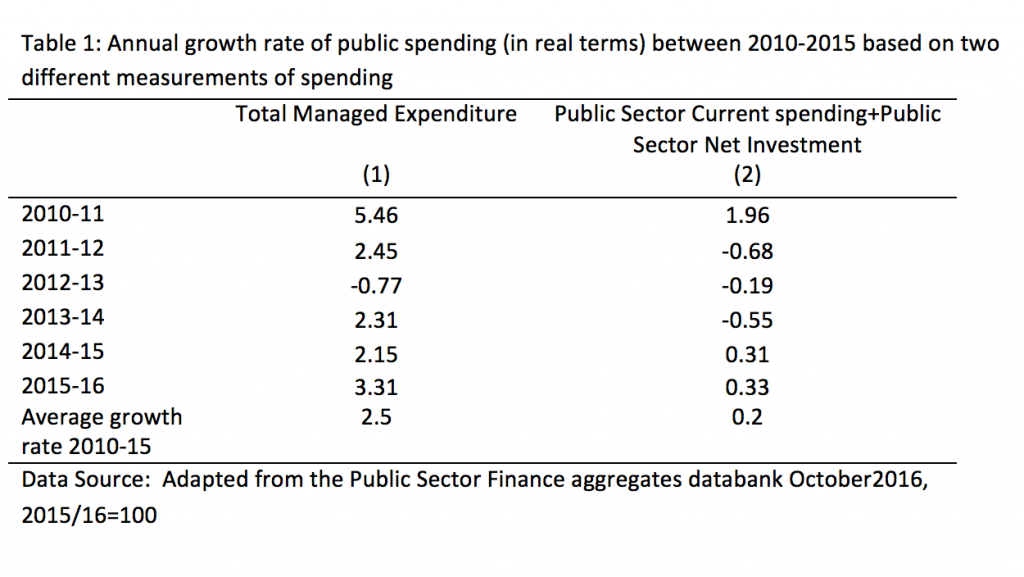 Further, the years of positive growth more than compensated for the years of negative growth during the 2010-15 episode so much so that on average spending increased in real terms. On the data we used total managed expenditure rose some 2.5 per cent on average in real terms during 2010-15, and on the definition of public spending that includes only current spending and net investment the growth, although smaller, was still positive at 0.2 per cent.

Overall, therefore, the 2010-15 efforts to cut spending by the government seem to be by no means as harsh as the efforts during the 1920s Geddes period when the growth in spending in real terms was negative on average over the entire episode and estimated to have been as high as 5.6 per cent a year (subject to source used). And in the 1933-35 episode, spending growth was negative at 1 per cent a year while in the 1977-78 episode, negative growth rate was around 1.3 per cent a year.

The categorization of spending squeeze episodes that we presented in our blogpost was conducted with careful attention to sensitivity analysis, and inclusion or exclusion of debt interest payments (the main difference between the definition we used and that used by Geoff Tily) does not substantially alter the classification of squeeze episodes. We therefore do not resile from our conclusion that the 2010-15 squeeze episode fits into a pattern of more spending-focused fiscal squeezes and spending squeezes that are longer but less deep than those of a generation or more ago.

Rozana Himaz is Senior Lecturer in Economics at Oxford Brookes University and Research Associate at the CSAE, Department of Economics, Oxford University.