The UK’s membership of the European Union means that EU workers and job seekers who come to the UK have access to its welfare system on essentially equal terms with British citizens. This has led to the idea that some migrants might be taking unfair advantage of the UK welfare system. UK politicians have made repeated claims about this possibility, often using the term ‘benefit tourism’ to describe this practice. David Cameron has changed rules in order to end the ‘magnetic pull of Britain’s benefits system’. Ed Miliband has promised to make sure that migrants ‘earn the right to any benefit entitlements’. Nick Clegg has insisted that it is right for migrants to ‘jump through hoops’ before claiming benefits.

A recent decision by the European Court of Justice has spurred even more debate about the possibility of ‘benefit tourism’.  This decision has been interpreted by some sectors of the British media as “Jobless migrants CAN be banned from claiming handouts”. In practice, there are already multiple administrative hurdles for EU citizens to claim benefits in the UK.

In the UK, EU citizens must demonstrate that they have a ‘right to reside’ in the country under EU law as well as satisfying the ‘habitual residence’ test in order to claim benefits. EU citizens can argue that they have a ‘right to reside’ in the UK if they are working as employees or self-employed, looking for work, self-sufficient or students, among other possibilities. The ‘habitual residence’ test involves aspects related to length of time in the UK, reasons for coming to the UK, family members in the UK and work experience in the country. Therefore, EU citizens only have a qualified right to claim benefits in the UK.

One of the problems with the current discussion on the topic is that there is no agreed definition of a ‘benefits tourist’. Often the use of the term by the media and politicians is vague and confusing, dealing with different groups at different times to support varying arguments. One popular interpretation of the term ‘benefit tourist’ is a person who travels to the UK with the primary objective of acquiring benefits. Unfortunately, there are no useful data on motivations of this sort.

One possible way of informing the debate is to move away from vague concepts such as ‘benefit tourism’ and estimate the number of people who may fit some of the narratives from the British media. Below we provide an example of the types of numbers that could be estimated to inform the debate. The purpose is not to provide an estimate of the number of ‘benefit tourists’ in the UK, but just to illustrate the potential benefit of using numbers to inform a confusing debate.

The Labour Force Survey (Second Quarter 2014) suggests that there are an estimated 5,244,000 non-British nationals in the UK. The media narrative around ‘benefit tourism’ implies that these people have relatively quick access to the UK benefit system. For the most part, non-EU citizens do not have recourse to public funds until they have been resident in the UK for 5 years. Therefore, they are unlikely to have travelled with the primary objective of acquiring benefits. This reduces the group to EU citizens. There are about 2,850,000 EU citizens in the UK.

Those who are currently working are unlikely to be categorised as ‘benefit tourists’ in the media even if they can access some in-work benefits. This limits the group to EU citizens who have lived in the UK for less than five years, are of working age and are not in employment. This reduces the group to 156,000 individuals. Students are also excluded from much of the discussion about ‘benefit tourism’. Dropping students reduces the group to 106,000 people. Finally, only 39,000 of those 106,000 reported that they receive ANY state benefits (including child benefit).

Hence, if we look at recent EU migrants of working age who are not students, not in employment and receive some kind of state benefit we get an estimate of 39,000 people. This is less than 1% of all foreign nationals in the UK and 1% of all EU nationals in the UK. Again, it is impossible to know how many of these 39,000 came to the UK to claim welfare benefits. Also, keep in mind that the Labour Force Survey may undercount the number of benefit claimants.

From vague concepts to actual evidence

Figures, such as the one estimated above, can be perceived as small (e.g. ‘a negligible share of EU nationals’) or large (e.g. ‘tens of thousands’) depending on the views of different people. It is also possible to argue that people with certain characteristics should be excluded from this group, such as individuals with a disability or those who have already worked in the UK.

The key point is that to have a discussion about the European Union and access to welfare benefits, it is important to move away from ambiguous concepts such as ‘benefit tourism’ and focus on actual numbers. Only then it would be possible to evaluate objectively if (and which) policy changes are necessary to address the potential misuse of the UK welfare system by other EU citizens.

Note: This article gives the views of the authors, and not the position of the British Politics and Policy blog, nor of the London School of Economics. Please read our comments policy before posting. Featured image credit: Duncan Hull CC BY 2.0

Yvonni Markaki is Research Officer at the Migration Observatory, University of Oxford. 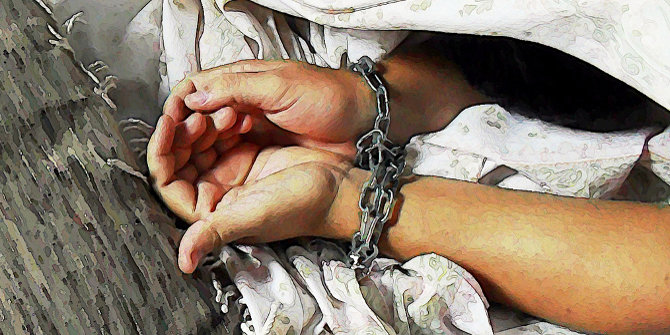