Focusing on processes including decision-making and memory, Future-Minded provides fascinating insight into phenomena such as coincidences and the illusion of control to consider how agency and control help us to think about the future. Neil Bramley writes that the book is a great choice for anyone interested in better understanding how the mind works. 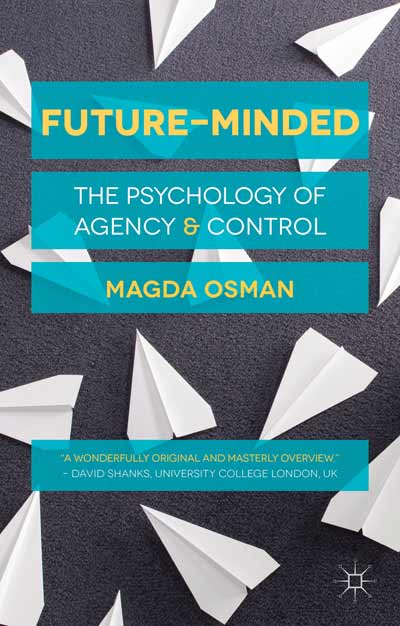 In recent years, there has been a spate of popular psychology contributions that emphasise the lack of control people have over their brains and their lives. Typically we are said to be at the whim of all sorts of cognitive biases, with our unconscious or our neural wiring playing the determining role in how we make decisions. The resulting messages tend to be negative ones for agency and self-determination: that we must be nudged to act well, that we should rely on our gut feelings rather than think through a problem, and that our moral responsibility is diminished because we are ruled by unconscious or neural processes.

In this timely contribution, Magda Osman, senior lecturer in psychology at Queen Mary, offers an alternative perspective. She argues, convincingly, that we actually have highly sophisticated abilities to detect what aspects of the environment we are able to control, to form goals based on our values, and to use our causal knowledge to direct our actions toward these goals, thus “bridg[ing] the present to a future that we want” (p. 193). This view of cognition results in a practical message that is more positive than many people will be used to hearing from recent cognitive psychology: you are in control, consciousness is crucial to how we choose how to act, and you can, and really should, take responsibility for your actions in order to hone in on the future you want.

The book is clear, easy to read and well-argued throughout. It provides a plausible high-level framework for understanding how we choose how to act and backs up each component of this framework with an accessible discussion of the empirical evidence. From the point of view of someone working in the area, Future-Minded is refreshing. The “people are dumb/biased/irrational” message has been overstated of late and Osman’s book reflects a recent sea change in cognitive science toward theories emphasising the idea of the brain as a highly sophisticated (if imperfect) prediction engine. Osman’s coverage of relevant literature is exemplary, bringing together philosophical theory, cognitive psychology and decision theories. This is impressive considering the extent to which these sub-disciplines are often couched in their own language and preoccupied with different goals.

Osman develops a “future-making machine” metaphor throughout the book, complete with flowchart (first appearing on p. 36), and the middle six of the book’s eight chapters focus on its various components. Helpfully, each chapter is concluded with a “two-minute summary” of the key points and this makes it easy to refer back if one forgets a key term or idea. Large parts of each chapter focus on relevant experiments. Osman uses a simple format summarising what was done in each experiment, allowing the reader to form their own opinions about the evidence rather than just being expected to accept each study’s conclusions.

Chapter two focuses on agency – one’s ability to cause things to happen in the world – and the related sense of agency – one’s ability to form and maintain an accurate conception of one’s own agency. This is a difficult topic and crucial for the theory but Osman handles it well. She turns first to philosophy, drawing on Davidson’s criteria for agency – thoughts that mediate our goal-directed actions – and discusses Dennett’s view that goals and intentions are explanatory vehicles for observers’ understanding rather than actual mental objects. Osman argues that agency and the related concepts of intentions and goals are more tangible than this, playing crucial internal roles in our cognitive economy. The author goes on to give evidence suggesting that various pathologies, such as schizophrenia and apraxia, may stem from the breakdown of the ability to accurately self-attribute agency.

Chapter four tackles causality and the related concept of coincidence. While causality is not the main focus of the book, this chapter could have gone into more detail. There are deep connections between causal beliefs and the concepts of agency and control. Causal beliefs are important not just because they tell you how to achieve desired outcomes, but also because it is largely through knowingly acting on the world that one is able to discover which of the patterns one observes are causal rather than merely coincidental in the first place. Osman does not really discuss this connection but argues that, in practice, we identify causality and distinguish it from co-incidence using a variety of different cues such as time and mechanistic plausibility.

Finally, in chapter seven, Osman focuses on goals and values. Here her discussion is thorough and insightful. She begins by making several important and often overlooked points about values. First, she writes that values are highly context specific, giving an example of valuing the tastiest versus the quickest-to-make coffee in the coffee shop depending on whether one is already late for a meeting. Second, that we tend to have a range of different values that are not necessarily commensurable (think liberty and equality). Third, goals span the gauntlet from the highly proximal (i.e. picking up a slice of cake) to the highly distal (going on holiday next summer). Fourth, goals can be realised in multiple ways while actions can realise multiple goals (numerous activities will help you stay healthy while simultaneously impacting on numerous other potential goals). An interesting discussion follows, exploring tensions between proximal and distal goals (leading to phenomena such as addiction), and the complexities of trying to satisfy multiple goals simultaneously over multiple time scales. This sets Osman up for the final message of the book, which is roughly that it is by being mindful and reflecting on our agency and our goals we can we learn to better achieve them.

This book is a great choice for anyone interested in better understanding how the mind works, offering a peek at some real (but digested) psychological research, or for those looking for a more optimistic perspective on how we might guide behaviour change than those suggested by recent behavioural economics books like Nudge and Predictably Irrational.

Neil Bramley is a psychology PhD student at University College London. He has an undergraduate background in philosophy from the University of Glasgow and has two Masters degrees, one in Cognitive and Decision Sciences and one in Computer Science both from University College London. His research investigates how people learn about causal connections in the world, and how they store and make use of this causal knowledge.

Book Review: The Politics of Electoral Reform: Changing the rules of democracy