The legacy of Blair and the invasions of Iraq and Afghanistan continue to loom large for the Labour Party, whether in opposition or in government, giving rise to fierce debates over Labour’s attitude towards the wider world. This book considers the idea of Labour’s international identity, examining how world events and Labour’s response to them have helped to shape ideology, political culture and domestic agendas from the 1920s until the Iraq War. Reviewed by Rhiannon Vickers. 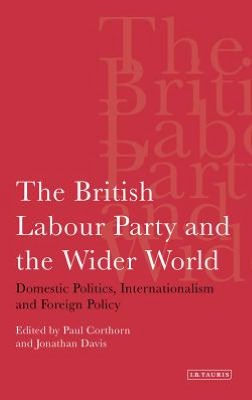 This edited book adds to a growing literature on the Labour Party’s foreign policy, its internationalist values, and its relationships with the wider world. The book has a broad historical sweep, from the inception of the Labour Party onwards. The various chapters raise a number of interesting historical themes and issues, and revisit some that have caused Labour a surprising amount of trouble, for instance the attitudes of party members to German rearmament.

There are some very rigorously researched and carefully written chapters, using a range of documents from the Labour Party archive, the personal papers of key political actors, and government papers. It was interesting to see a chapter on Ramsay MacDonald’s foreign policy and the role that he played as both Prime Minister and Foreign Secretary during the 1924 minority government, which tends to be an overlooked era in Labour Party history. As Shepherd points out, ‘Labour’s relations with the wider world have been seen as one of the ministry’s few achievements during only 287 days in office and to have played a significant role in the evolution of Labour’s international policy in the post-war years.’

The chapter written by Paul Corthorn on the ‘The Labour Party in the Era of the Nazi-Soviet Pact’ is particularly interesting, as it highlights how ‘the Labour Party as a whole never fully reconciled its internationalist vision to a world in which the Soviet Union was not an ally’. He outlines how the Nazi-Soviet Pact, coming soon after the failure of the League of Nations to prevent acts of aggression and conflict between states, led many in the party to support the establishment of a more federalist international organisation, one that would involve states agreeing to a reduction in national sovereignty. However, not all of the chapters have the same research rigour, and I feel that some of the authors may have benefited from spending a bit more time in the Labour Party archive.

Toye and Lawton’s chapter takes a slightly different perspective, focusing more on internal party dynamics. In ‘The Labour Party, Affluence and the Cold War’, they offer some interesting reflections on how a ‘Cold War-affluence’ discourse was used to reconcile different factions within the party. This has many potential links to the work done in the 1990s on the way in which the ‘politics of productivity’ were used to reconcile the party to the emerging Cold War and to supporting US hegemony in the post-war period.

The chapters covering more recent events such as Labour’s response to the break-up of the former Yugoslavia by Schreiner and New Labour, the US and the Iraq War by Phythian, are well-written and thoughtful, but seem slightly at odds with the other contributions. The book leaps from the 1960s to the 1990s, and it seems strange that there is no contribution on the 1980s, a decade that saw such shifts in Labour’s foreign and defence policy and attitudes towards the wider world, and which then formed a key component of the subsequent modernisation of the Labour Party in the late 1980s and the 1990s. Despite this, both these chapters contain some interesting analysis and reflection on Labour’s recent history that would be of interest to a wide audience.

The problem the editors have faced is that it is difficult to cover such a broad topic in one volume, and a more clearly developed focus to guide the authors would have been beneficial. The selection of topics covered seems a little random, and the volume lacks an overall theme or argument, other than stating that ‘Labour’s values and ideals were not ones that stopped at the English Channel’. Thus, it is difficult to see this volume as making a major contribution to the debates about the Labour Party’s history, policies or ideas. However, where the book does have value is that the combination of chapters demonstrate the interplay between domestic and international values and influences. As Davis points out, ‘There has always been a tendency in the Labour Party to look to the wider world to see what lessons could be learned from other social democratic and socialist parties.’

The British Labour Party and the Wider World does not offer any radical new insight into the Labour Party’s foreign policy and its external relationships. However, it does offer a collection of thoughtful and detailed essays, some of which are particularly well-researched, on a range of topics that would be of interest to students and scholars.