Barbara Richter finds Wasters to be a compelling and insightful book on waste and scandal in the Irish economy, and notes that the authors have not lost their sense of humour despite the serious nature of the topic. 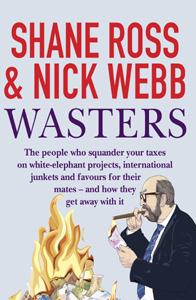 Cronyism, overspending and poor business practices in Ireland’s semi-states are the topic of , by journalist Nick Webb and journalist and politician Shane Ross. They describe in painstaking detail the myriad ways in which the Irish government and its friends failed to live up to the standards of good governance in the decade or so before the Irish bubble burst. While the book is written for an Irish audience, it offers useful lessons for the rest of us: on the importance of oversight over politicians’ expenditures (MP expenditure scandal, anyone?), and on the advantages of a large talent pool for both political office and civil service.

The authors start with an overview of the history and idea behind “semi-states”, public organisations designed to help the government where markets fail. They go on to describe how the leadership and oversight boards of these bodies are filled (hint: being close to the Taoiseach helps), how well these posts are paid (some of them way too much for the amount of work that seems to be associated with them), and the many ways these board members found to travel the world and eat in the best restaurants and sleep in the nicest hotels and make the state pay for it. There are detailed accounts of overspending, inefficiency and procurement irregularities in the organisations responsible for the health service, worker training, public transport, Dublin docklands, and the banks. Wasteful members of the Irish parliament get a chapter, as does the social partnership between unions and government responsible for agreeing wages and working conditions.

Crammed into 250 pages, it is hard to avoid the impression that the Irish public service is a mafia of political friends, out to fleece the country on all sides. Issues arising from one “semi-state” or government council are solved by creating another consulting council that seems to the outsider as different from the first as the Judean People’s Front from the People’s Front of Judea.

Reading the book is quite entertaining. The authors have not lost their sense of humour in all their research, and their stories on uncovering some of the misdeeds of these public bodies reads like a John Grisham novel – with buried reports of irregularities, anonymous informants that need to be protected, upstanding employees trying to uncover misdeeds who are removed from their jobs, public witch hunts, etc.

The book is clearly written for an Irish audience, and the internet is a necessary companion for non-Irish readers: the acronyms for most semi-states are not explained until the appendix, and it only becomes clear while reading a chapter what the acronym in question actually does. The authors not only expect their audience to know what the Taoiseach is, they also assume that Oireachtas (both chambers of parliament) and Ceann Comhairle (chairman of the house of representatives), among others, are common knowledge.

Ross and Webb weaken their case somewhat by not distinguishing the waste of money from simply spending money.  Sometimes the benefits of a trip or a project might mean expenses are justified, but the reader is given only information on the cost side. One example: ten thousand Euros in hotel bills on a fact-finding trip to the US sounds absurdly high. It becomes less outrageous a few sentences later, when you learn that the delegation comprised more than ten people, and they stayed about a week. Their hotels were not cheap, but not obscenely expensive either. Were there any useful facts uncovered on this trip that might make the expenditure worthwhile? The authors don’t tell us either way.

With many of their examples, however, the wastefulness is not in question. They provide insight into how a healthy and fast growing country could get itself into the mess that Ireland is in today. They don’t talk about politicians and their friends in the abstract, but give their names and histories. All this makes for compelling reading, and I would dearly like to know how much of the phenomenon Ross and Webb describe is fundamentally Irish, and how much of it you would find in other countries if you chose to look hard enough.