Throughout the short campaign, this blog will publish a series of posts that focus on each of the electoral regions in the UK. In this post, Jack Blumenau and Simon Hix discuss the overall picture of party competition across these different regions. They show that different regions face different constellations of competitive parties, and that there has been a steady increase in party fragmentation across regions over time.

The decline in support for Britain’s two traditional parties over the past two decades is now common knowledge. Over 90 per cent of people voted either Conservative or Labour in the 1950s, yet less than two-thirds voted for these two parties in 2010 and perhaps even fewer will support them in May 2015. What is also recognised is that this change is not simply a result of growing support for the Liberal Democrats, particularly in 2010, but also a result of growing support for the nationalist parties in Scotland and Wales, and two relatively new entrants in British politics: UKIP on the right, and the Greens on the Left. In short, Britain is now a multi-party system. End of story!

Well, not quite. As the figure below shows, the effective number of parties at the national level has increased from just above 2 in the 1950s to over 3.5 in 2010. Looking at the constituency level, though, the increase is not quite as significant: from just below 2 in the 1950s to 2.9 in 2010. What this difference suggests is that party competition across constituencies has become increasingly heterogeneous. For example, the Conservatives and Labour were the top 2 parties in fewer than 45 per cent of constituencies in 2010. 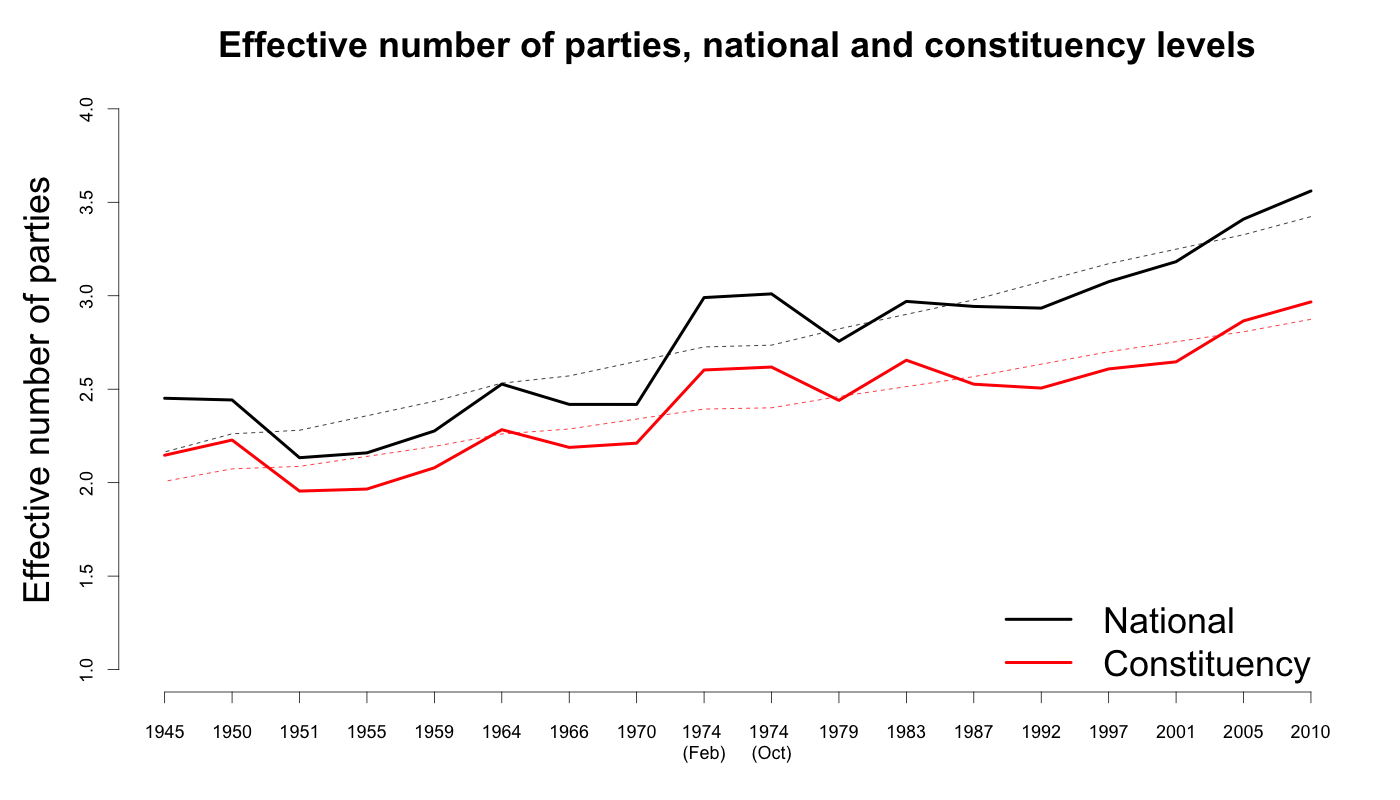 To illustrate how party competition has evolved below the national level, the next figure shows the effective number of parties in each region between 1997 and the likely outcome in 2015 (based on the latest forecast from electionforecast.co.uk). The first thing to note is that the number of parties has increased on average in all regions, by approximately 1 additional party (using this particular index). The second key take-away, though, is that this change has been more dramatic in some regions than others. Wales has seen the most dramatic change (from 2.75 parties in 1997 to 4 parties in 2015), while the South East has seen the smallest increase (from 3.20 to 3.36). 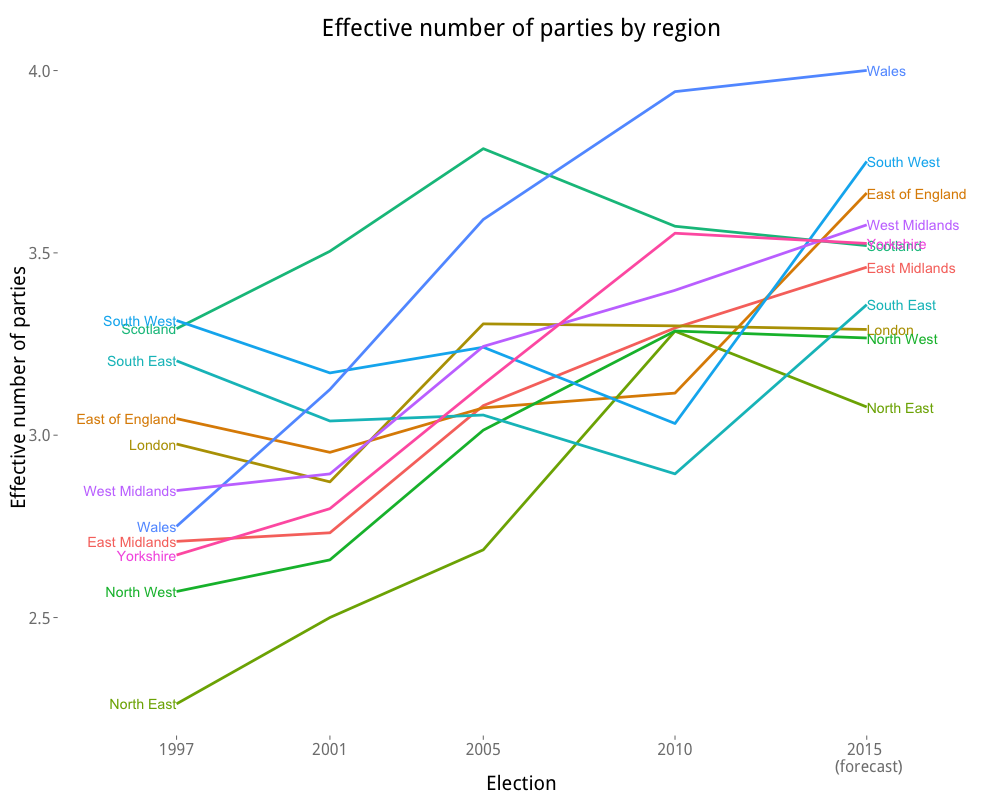 Underlying these patterns are the changes in party competition at the constituency level. The following figures show snapshots of the structure of party competition in each region, by showing the proportion of seats in each region that are characterised by a particular party battle: Conservatives vs. Labour, Conservatives vs. Lib Dems, Labour vs. Lib Dems, Labour vs. SNP, and so on. 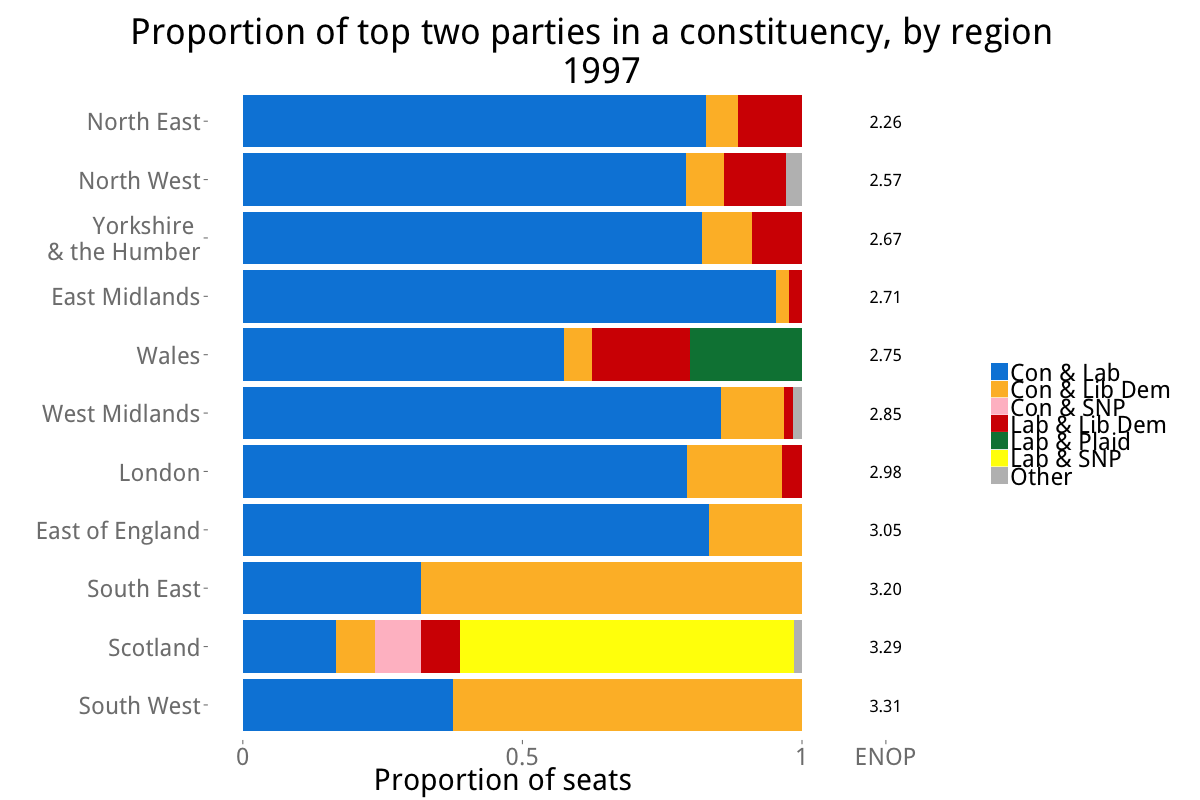 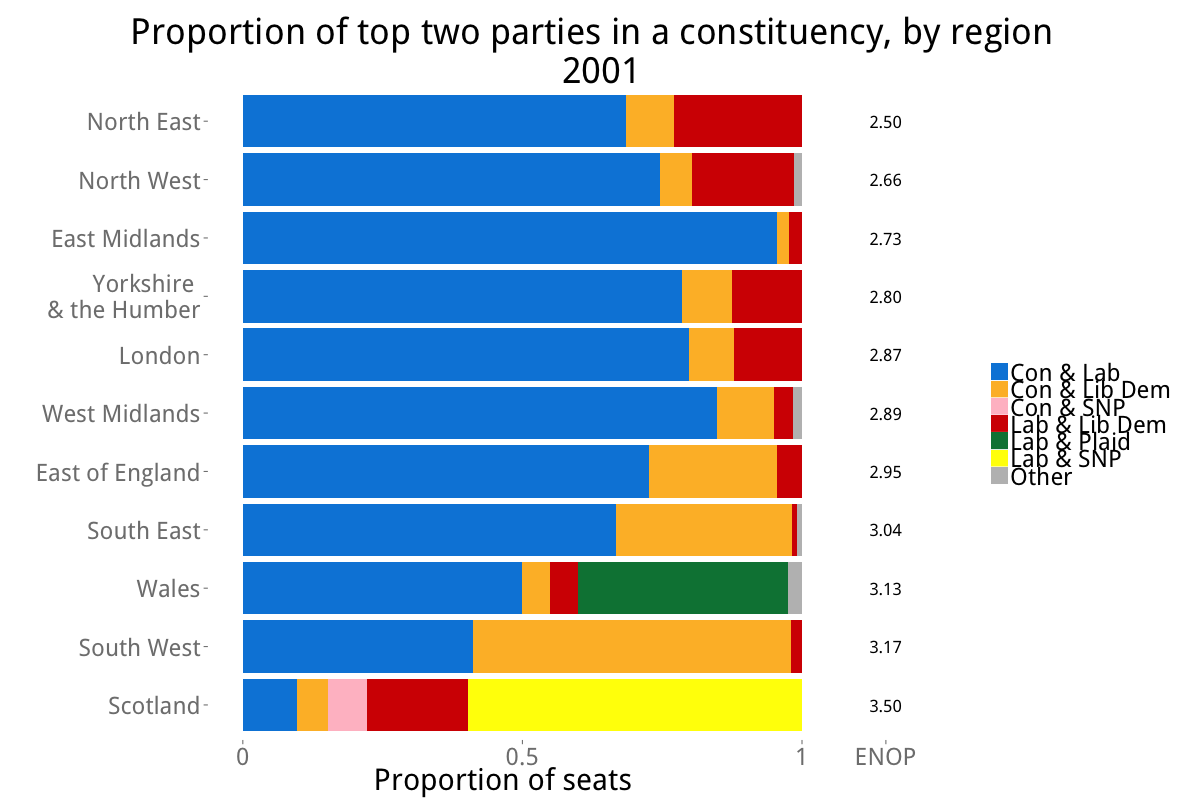 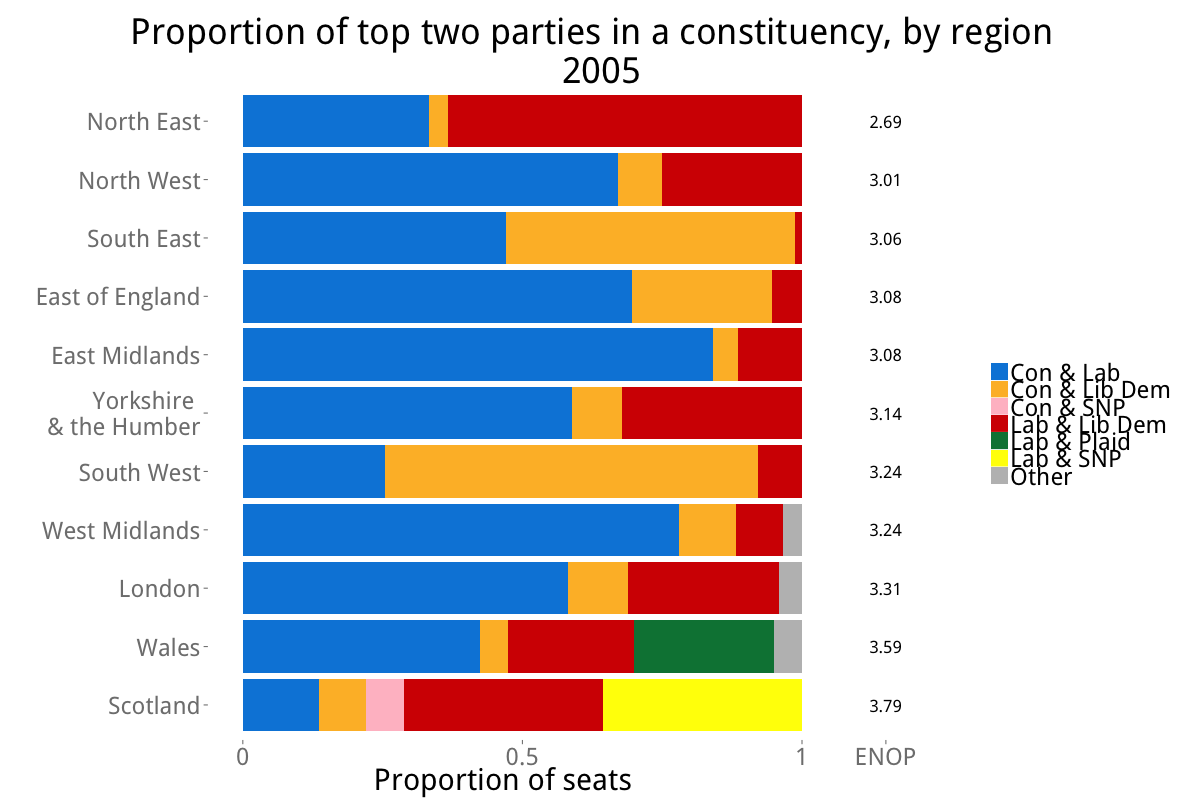 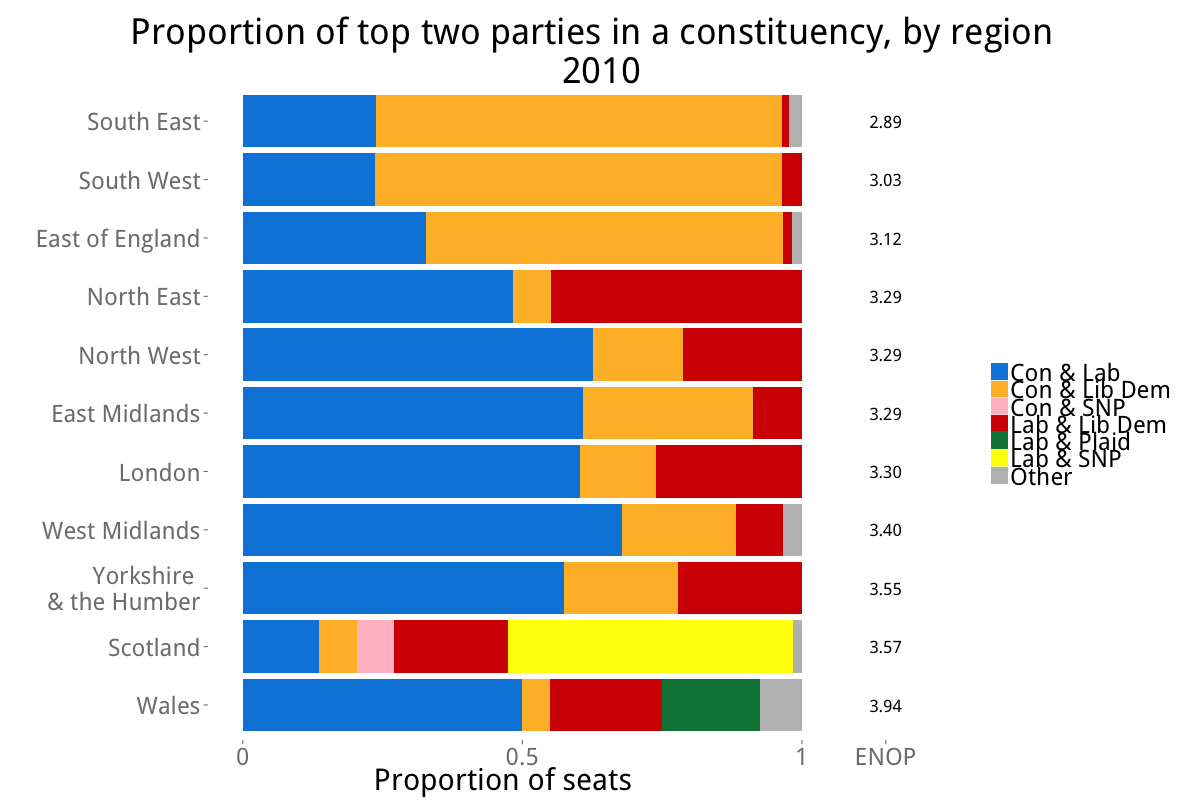 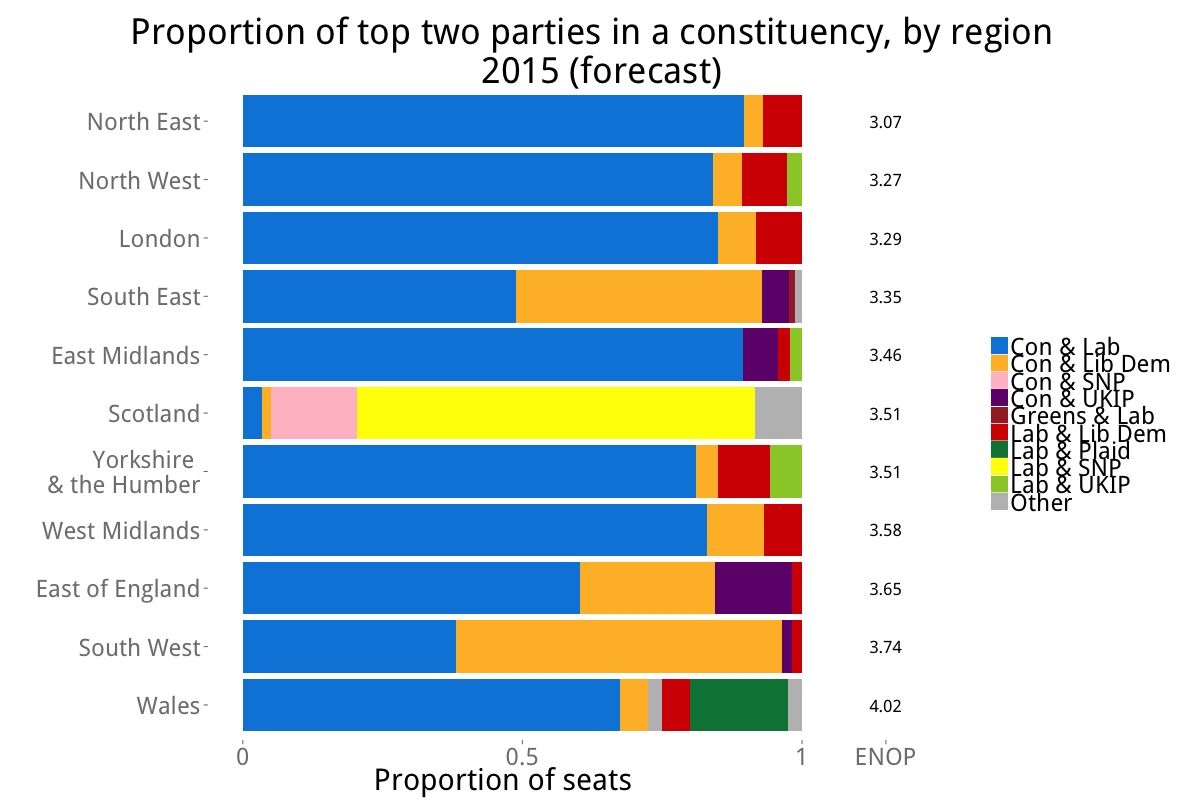 Navigating through these figures illustrates several features. First, there is persistent variation between regions across elections. For example, the South West and South East are dominated by Conservative vs. Lib Dem constituencies, while the North East and North West are dominated by Conservatives vs. Labour, and Scotland looks to have become a straight shoot-out between Labour and the SNP.

Second, and perhaps more surprising, is the change over time within some of the regions, particularly in light of the forecasts for 2015. Between 1997 and 2010 there was an increase in the proportions of Conservative vs. Lib Dem and Labour vs. Lib Dem constituencies in many regions. In 2015, though, these two types are both likely to all but disappear in 2015, to be replaced by a much more varied patchwork of battles: Labour vs. SNP in Scotland, Labour vs. Plaid Cymru in Wales, Conservatives vs. UKIP in parts of the East of England and East Midlands, and Labour vs. UKIP and Conservatives vs. UKIP in different parties of Yorkshire and the Humber.  Meanwhile, the North East, North West, London, and the West Midlands look to have returned to a straight battle between the Conservatives and Labour.

In short, underlying the new British multi-party system is an increasingly varied map of party systems at the regional and constituency levels across the country. What we have tried to do in this post is illustrate and describe some of these changes.

What we have not done, of course, is try to explain these changes. While a complete analysis of this phenomenon is beyond the scope of this post, a promising place to start is with the insights of Maurice Duverger. Writing in 1951, Duverger argued that plurality elections in single-member constituencies (the UK’s “first-past-the-post”) should produce a two-party system.  First-past-the-post elections make it difficult for smaller parties to win seats; what Duverger called a “mechanical effect”.  And, understanding this, voters realise that they should not waste their votes on smaller parties, but focus on the two largest parties, what he called a “psychological effect”. Duverger’s “Law” clearly no-longer holds in the UK: we have a first-past-the-post electoral system yet a multi-party system.

Gary Cox provides a good explanation of this which is consistent with Duverger’s logic.  If voters focus on the race in their individual constituencies, there may be a two-party race in each constituency (between the two most viable candidates), but there could be different two-party systems in each constituency.  This is the case, for example, in India and Canada (which also have first-past-the-post elections and multi-party systems), and is increasingly the case in the UK, as we show.

So, the key question, then, is: why are there different party systems in different constituencies or different parts of the country?  One reason could be that there has been growing heterogeneity in political preferences in different regions as a result of growing economic and social differences – where the average voter in some regions is now considerably more left-wing than the national average (as in Scotland, for example) while the average voter in other regions is considerably more right-wing (as in the South East). This might seem obvious to many people.

Nevertheless, there is a second potential reason for growing regionalisation of the party-system which might seem less obvious, and which relates to repeated strategic behaviour by some voters.  Small political differences between regions can be magnified by repeated strategic (or tactical) voting.  For example, as Labour started to lose support in the South West and South East, many Labour voters have gradually switched to the Lib Dems, who seem more able to beat the Conservatives in many constituencies. Similarly, as the Conservatives started to lose support in Northern cities, many Conservative voters have switched to Lib Dems and now UKIP, who seem more able to beat Labour in many constituencies in these areas.

What we do not yet know, though, is how much of the growing fragmentation of the UK’s two-party system can be explained by growing political heterogeneity or by repeated strategic voting. This is something we hope to investigate further after the election in May.

Note: This article was originally published on the LSE’s General Election blog and gives the views of the authors, and not the position of the LSE British Politics and Policy blog, nor of the London School of Economics. Please read our comments policy before posting. We thank the team at electionforecast.co.uk for kindly sharing their data. 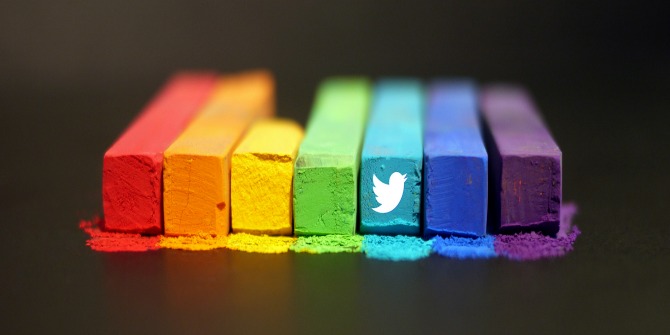