People do not psychologically benefit from economic expansions nearly as much as they suffer from recessions, according to research by Jan­-Emmanuel De Neve and colleagues. The findings suggest that steady positive growth that minimises the risk of contraction seems the most likely route to improving general wellbeing.

How do macroeconomic changes affect people’s wellbeing? It would be reasonable to expect the massive swings of recent decades – see­sawing from boom to bust and back again – to be reflected in a parallel see­sawing of their psychological impact. But our research reveals an important asymmetry in the way that individuals experience positive and negative fluctuations of the business cycle. We find evidence that the life satisfaction of individuals is between two and eight times more sensitive to periods when the economy is shrinking than at times of economic growth. People do not psychologically benefit from expansions nearly as much as they suffer from recessions.

Our results suggest that policy­makers seeking to maximise wellbeing should focus more on preventing busts than promoting booms. They also help to explain why rising GDP does not always pay off in increases in happiness: the modest happiness gains accrued over years of growth can be wiped out by just a single year of contraction. To explore how individuals react to positive and negative growth, we analyse wellbeing measures from three large datasets: the Gallup World Poll of 151 countries; a representative sample of 2.5 million Americans; and Eurobarometer, a twice-­yearly opinion survey conducted by the European Commission.

In general, we find that growth is significantly associated with wellbeing. But when split across positive and negative growth, this result is mostly driven by the negative growth years. Recession years are significantly associated with losses in wellbeing, but there is not an immediate relationship between positive growth years and wellbeing. So why do people experience macroeconomic losses more negatively than they experience equivalent gains positively? People’s disproportionate sensitivity to negative stimuli – and the general finding that ‘bad is stronger than good’ – may have an explanation rooted in evolutionary biology, since in terms of survival the avoidance of threats is more important than a missed opportunity.

Periods of economic contraction not only involve a loss of national income but also an increase in uncertainty, which is arguably intensified by the disproportionate coverage of negative news about macroeconomic trends compared with positive trends. Volatile business cycles and the resulting uncertainty are also attention­ seeking stimuli. Other research has highlighted the role of economic insecurity in increasing angst and stress by showing that the subjective wellbeing of employed individuals working in the public sector – who in general enjoy more job security – is less acutely affected by economic shocks than comparable, less protected workers in the private sector.

The central findings of our study provide an opportunity to revisit the longstanding debate on the relationship between economic growth and wellbeing. When considering longer ­term data, which cover entire business cycles, it appears that reported wellbeing has not risen in most of the world’s economically developed countries despite real GDP having almost doubled over the past four decades.

This result echoes work by Richard Easterlin, the pioneer of research on happiness economics. Easterlin’s ‘paradox’ – resulting from conflicting findings in the short term (using annual growth data, which incorporate both positive and negative growth years) versus the long term (real GDP data that cover one or more business cycles) – can perhaps be better understood in light of CEP’s results on macroeconomic ‘loss aversion’. Recessions can rapidly undo the wellbeing gains from longer expansionary periods and lead to an insignificant relationship between national income and average wellbeing when considered in the long run.

The experience of Greece is illustrative. The country’s real GDP grew by more than 50% between 1981 and 2008, while life satisfaction edged up by 5­10% overall (with most of the gains made over the decade of stable growth to 2008). But the recession that began that year led to a decrease in average wellbeing that erased all prior gains. Average wellbeing in Greece now stands at a level below historical records, despite real GDP remaining at a level well above historical figures (see Figure 1). The psychological costs of the recession cut even deeper than the negative growth numbers would indicate. 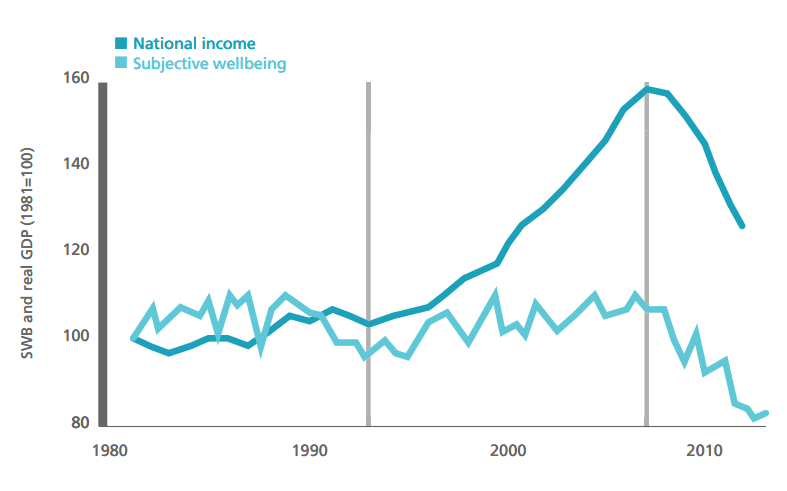 A better understanding of this asymmetric sensitivity has macroeconomic policy implications. On the one hand, a typical reading of the income­-happiness paradox suggests that further growth in the developed world is a futile means to the end of improving wellbeing. On the other hand, researchers who find evidence of a positive relationship between wellbeing and GDP typically take from this that further economic growth is good for society.

Our findings suggest a more nuanced perspective: policy that is designed to engineer booms but which risks even relatively short busts is unlikely to improve wellbeing in the long run. Steady positive growth that minimises the risk of contraction seems the most likely route to improving general wellbeing.

Jan­-Emmanuel De Neve is an assistant professor in political economy and behavioural science at University College London and a research associate in CEP’s wellbeing programme.

George Ward is a research assistant in CEP’s wellbeing programme.

Femke De Keulenaer is at Ipsos.

Bert Van Landeghem is at the University of Sheffield.

Georgios Kavetsos is at the London School of Economics.