Charities and NGOs are primary users of academic research, playing a significant role in the social impact of research. Duncan Green, Senior Strategic Advisor for Oxfam GB, suggests that researchers and their funders look to the outcome-oriented framework popular among development organisations called ‘theories of change’ to bolster the two-way relationship between academics and NGOs in order to maximize social impact.

I got dragged into DFID this week for yet another session on theories of change. This one was organized by the DFID-funded Research for Development (R4D) project (sorry, ‘portal’). A lot of my previous comments on such sessions apply – in DFID the theories of change agenda seems rather dominated by evaluation and planning (‘logframes on steroids’), whereas in Oxfam, it is mainly used to sharpen our work in programmes and campaigns. But the conversation that jumped out at me was around ‘how do we influence the researchers that we fund to use theories of change (ToCs) to improve the impact of their research?’

It’s risky to generalize about ‘academics’, but I’m going to do it anyway. Let’s apply some ToCs thinking to academia as a target. Applying ToCs to try and understand why academics don’t use ToCs may feel a bit weird (like the bit in Being John Malkovich where Malkovich enters his own brain), but bear with me.

Let’s start with the 3i model – processes and decisions are influenced by institutions, interests and ideas. Because academia is largely non-profit making, institutions and interests are pretty much the same thing, and come down to incentive and career structures. Here I think DFID has a problem in getting researchers to be more concerned with impact – whatever favourable ideas are around in terms of academics wanting to change the world are likely to be neutralised by the institutional culture:

Career progression takes place largely through peer approval rather than through any ability to influence the world outside (in fact, being dubbed a ‘media don’ can damage your promotion prospects).

One of the big risks for an academic is being rubbished in public for being wrong, naive or insufficiently nuanced – academics love snark and gossip (not like NGOs then…) and that kind of kicking can damage your reputation for years. So there are strong disincentives to set out clearly your assumptions about how change happens (especially if they’re really naff, like ‘all you need is robust research to convince grateful-but-dim policy makers to change their misguided ways’, which I suspect is actually the theory of change behind a lot of research).

That fear of clarity may explain why when I worked as a publisher, I watched how perfectly good, clear writers started a PhD and were lost to me, entering into several decades of inaccessible post-modern gibberish before emerging blinking into the light as self confident, respected professors once again able to communicate in normal English (e.g. talking to a potential young author on Mexico. Me: ‘so who has the guns then?’ Author – light dawns after baffled look – ‘Oh, you mean the repressive apparatus of the state!’) 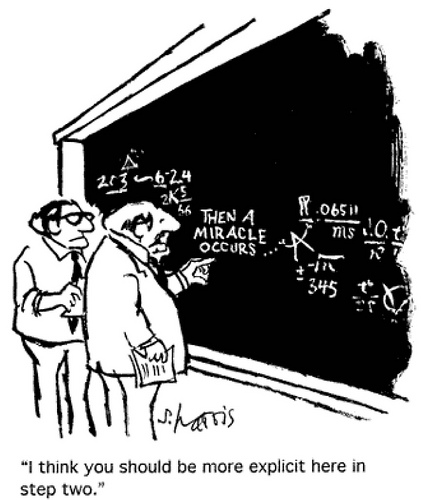 What other ideas might ToCs suggest? That you need to reward and build alliances among the drivers of change (eg encouraging young Blattmanesque bloggers who ‘get’ communications and influencing, while doing your best to neutralise ‘blockers’ – custodians of the peer-reviewed flame, perhaps?).

Or that you need to spot and capitalise on windows of opportunity, since change is seldom smooth and continuous. In the UK, one such window of opportunity is the new version of the Research Assessment Exercise (RAE), the enormously influential scheme by which UK universities are assessed for state funding. The next round of the RAE, now renamed the ‘Research Excellence Framework’ concludes in 2014. Importantly, it will allocate 20% to impact, defined as ‘reach and significance’. Could DFID and other funders pick that up and use it in their own assessments?

How else could DFID help turn this around? It has a lot of clout, largely coming from its sizeable research budget (about £200m a year last time I looked). Here’s a few ideas, in no particular order and mixing up sticks and carrots.

How to get researchers to understand the minds and lives of the non-researchers they hope to influence? How about insisting that any recipient of a DFID research grant not only identifies the non-academic targets of their research, but gets credit if they manage to arrange to shadow these targets for a few days to find out how they absorb and use information (I learned more about advocacy from shadowing a UK Development Minister for a day than from dozens of workshops).

Publish (and require recipients to publish) stats on blogging, citations in the media (not just journals) and any other indicators of communications and/or impact, by named academics, in order to generate some positive competition. Let the league tables commence….

In funding applications, insist on a proper power analysis/theory of change, including which target institutions are to be influenced, what the opportunity timetable looks like (eg new legislation or drawing up manifestos). If anyone limits their ToC to ‘changing the discourse’, they should probably be taken out and shot (unless they can plausibly suggest how they aim to achieve that).

Ask researchers to explain how they will involve both influencing targets and communications people in the governance of their research from the outset (rather than completing the research and then saying, ‘oh blimey, how do we communicate this to keep DFID happy, we’d better organize a seminar and send a copy to the Minister’).

There are also risks here – people are sometimes scarily ready to blur/erase the boundaries between advocacy and impartial academic research – more on that to follow.

Previous thoughts on getting research into policy here and here.

Other thoughts from the workshop here.

This blog was originally published on Duncan Green’s blog From Poverty to Power and is republished with permission.

About the author
Duncan Green is Senior Strategic Adviser for Oxfam GB and author of the book ‘From Poverty to Power’.

Happy holidays to all our readers and best wishes for 2014!

From the OBR's report to Miliband sibling rivalry: round up of political blogs – 12-18 June