For the first time ever in the UK, we are getting substantial numbers of full-sample polls in marginal seats. Several of those conducted hitherto have been in Wales: in Cardiff North, Cardiff Central, and Brecon & Radnor. Now, as part of the latest batch of such work, comes a new poll in Carmarthen West & South Pembrokeshire. In this post, Roger Scully analyses the latest polling information, and comments on how it compares to the results in 2010.

The new batch of marginals examined by Lord Ashcroft mainly comprises seats that are a little less obviously marginal than many of those examined before. But they are still seats that Labour probably needs to win if it is to gain an overall majority. Carmarthen West & South Pembrokeshire is a good example of this: Labour won it in their comfortable 2005 general election victory, but lost it to the Conservatives in 2010.

As before, Lord Ashcroft has asked two main voting intention questions in these polls. The first is the ‘standard’ question: “If there was a general election tomorrow, which party would you vote for?” The figure below shows the result in the seat in 2010, and then the results from two questions asked by Lord Ashcroft. 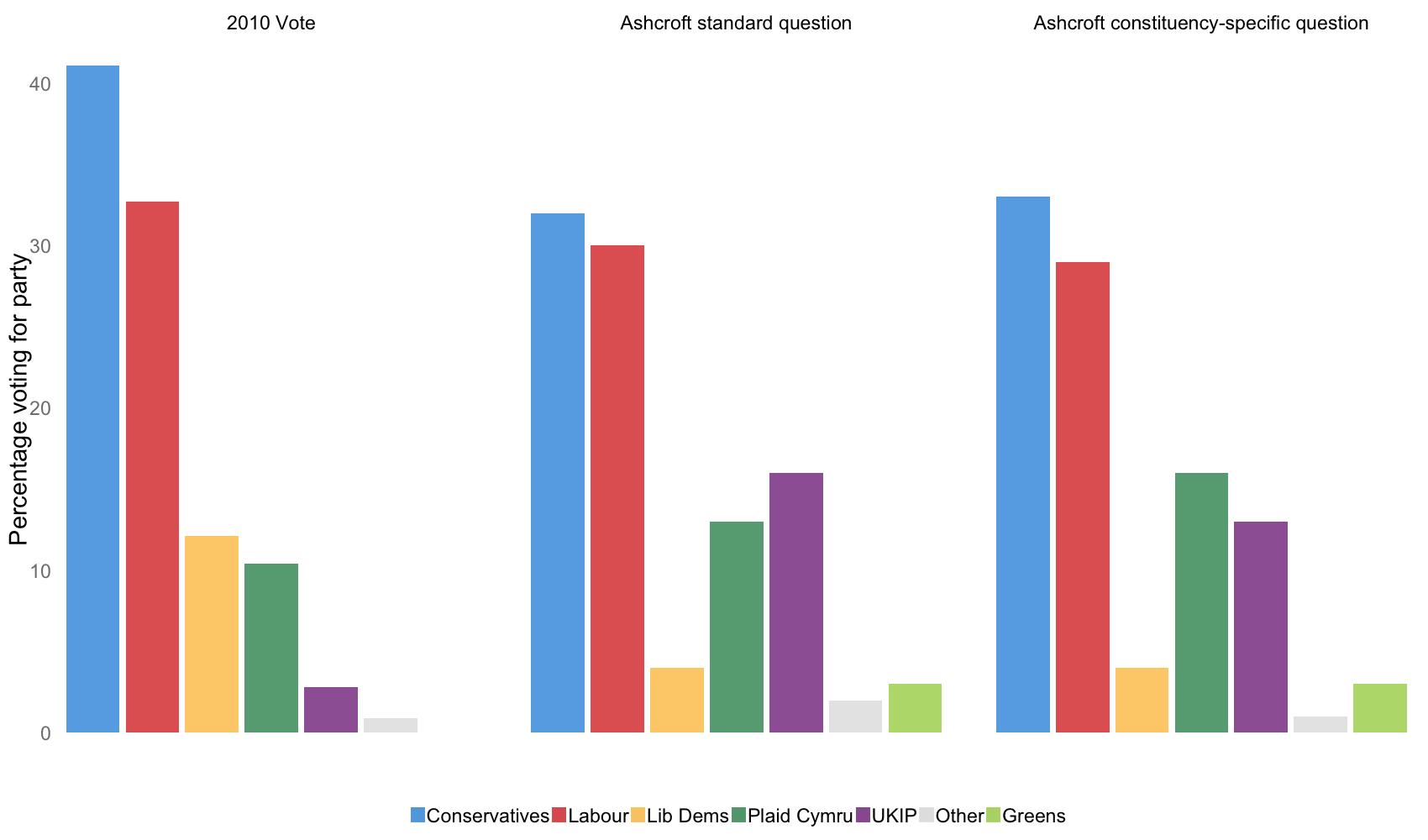 Comparing the 2010 result to the ‘standard’ question would suggest a significant net swing (roughly 3%) to Labour since 2010, making the seat look very marginal indeed. Also notable is a strong UKIP showing: indicating, as we may see in a number of Welsh seats in May, that while UKIP are not likely to be polling strongly enough to be threatening to win many seats they may well be taking enough votes to have some influence on who does win,

However, as with previous such polls a second voting intention question was asked, where respondents were specifically prompted to think about the situation in their own parliamentary constituency. In several of Lord Ashcroft’s previous polls this latter question has prompted significantly different responses to the ‘standard’ one. And, to at least some extent, that is what we see once again in Carmarthen West & South Pembrokeshire.

Comparing the 2010 result to the ‘constituency-specific’ question points to a slightly smaller Conservative to Labour net swing since 2010 (roughly 2%). They also – for reasons I am unsure about, although possibly reflecting the party’s strong recent performance in Carmarthenshire – look somewhat better for Plaid Cymru, although without suggesting that Plaid have any serious chance of actually winning the seat in May.

Among the other details in the poll are responses to a question asking about whether people have been contacted by any of the parties ‘over the last few weeks’ (with contact defined as any one or more of leaflets, newspapers, letters, email, telephone calls or doorstep canvassing). It’s very interesting here to see the patterns of contact reported: 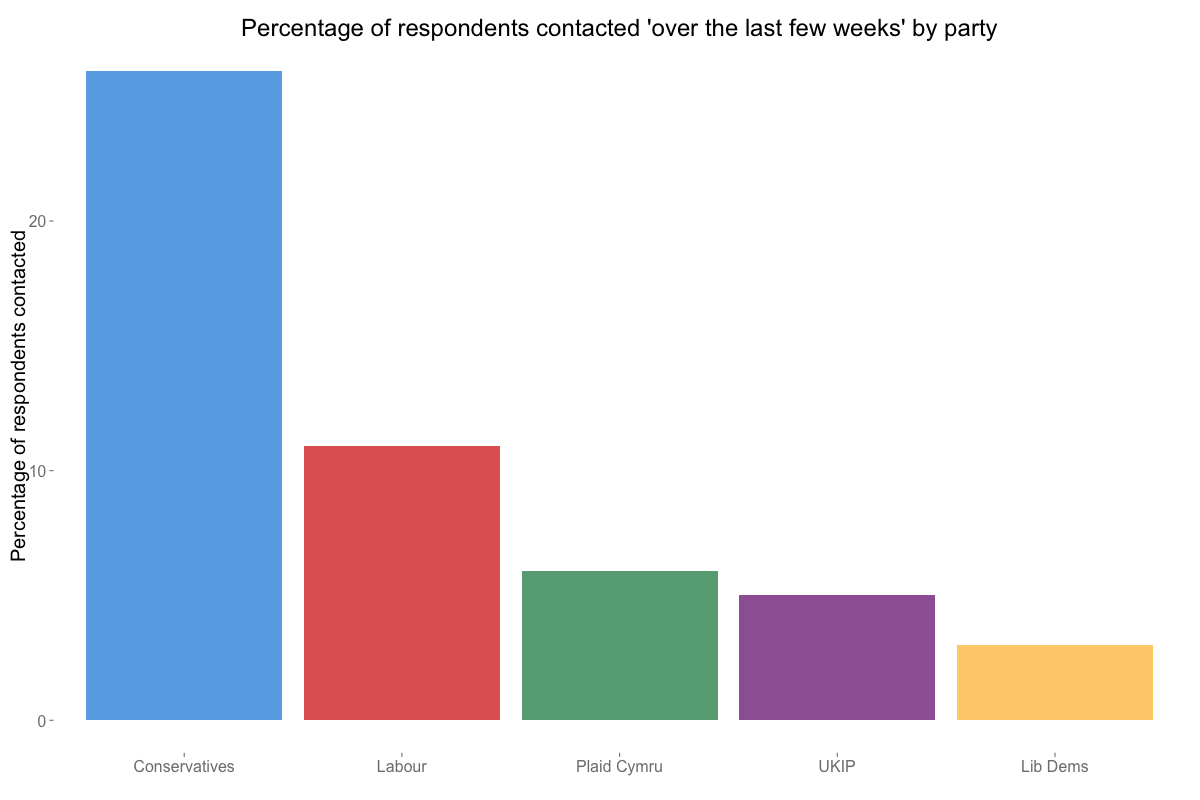 Labour would seem to be behind the game in this seat in their on-the-ground campaigning. This may help explain the slightly bigger gap in constituency-specific voting intentions. Of course, the more positive interpretation for Labour is that they already seem to be within striking distance of the Tories even while they have been lagging well behind in local campaigning effort; if they can match their opponents on the ground over the next four-and-a-bit months, they may well be in with a real chance of victory.

Thus far, the main pattern in Lord Ashcroft’s polls of Conservative-Labour marginals has been one of Labour performing more strongly in the marginal constituencies than in the national polls. That doesn’t quite seem to be the case in Carmarthen West & South Pembrokeshire. Here, recent Welsh polls have pointed to the Conservatives being projected to narrowly hold the seat on uniform national swings. This new marginal poll in the seat is very much in line with those projections. But perhaps the main message is that this is a seat that is very much up for grabs: the Tories currently seem to have a slight advantage, but it would be a brave person who would put their mortgage on which way this seat will go in May.

Polling Matters: Will it be 1992 all over again for the pollsters?