Is religion a good vote predictor? Ben Clements looks at the preferences of the Catholic community in the UK and finds that the historical data confirm a strong link between Catholics and the Labour Party – a link that is even clearer in Scotland. But more recent data also indicate some decrease in support.

As the 2017 general election campaign has commenced and as the media once again probe the contemporary links between faith and politicians, it is worth revisiting the question of religion and party support. Recent research on the historical links between religion and party choice in Britain concluded that ‘religion was a good predictor of vote in the past, and remains a good predictor today’ and, moreover, across the decades, there have been ‘large and constant differences between different denominations in their party preferences’.

This article provides a specific focus on long-term and recent evidence pertaining to the political preferences of the Catholic community, situated within research I have undertaken recently into the socio-political opinions of religious groups in Britain, as well as more focused inquiry into the views of Catholics on social issues. The long-term evidence reaffirms the strong denomination-party links, both in terms of voting behaviour and more general loyalty, but the more recent data point to a weakening of this linkage within the Catholic communities in England and Scotland.

Data taken from long-running survey series reconfirm the strong party-denominational links between the Catholic community and the Labour Party. Using data from the British Election Study (BES), Figure 1 charts the party vote share (Labour, Conservative and Liberal (Democrat)) of Catholics at general elections since 1959. The higher levels of support for Labour compared to the Conservatives (the exception is the 1979 election) are apparent for most of the period, but support amongst Catholics has declined at recent elections. Support for the Conservatives has increased somewhat. 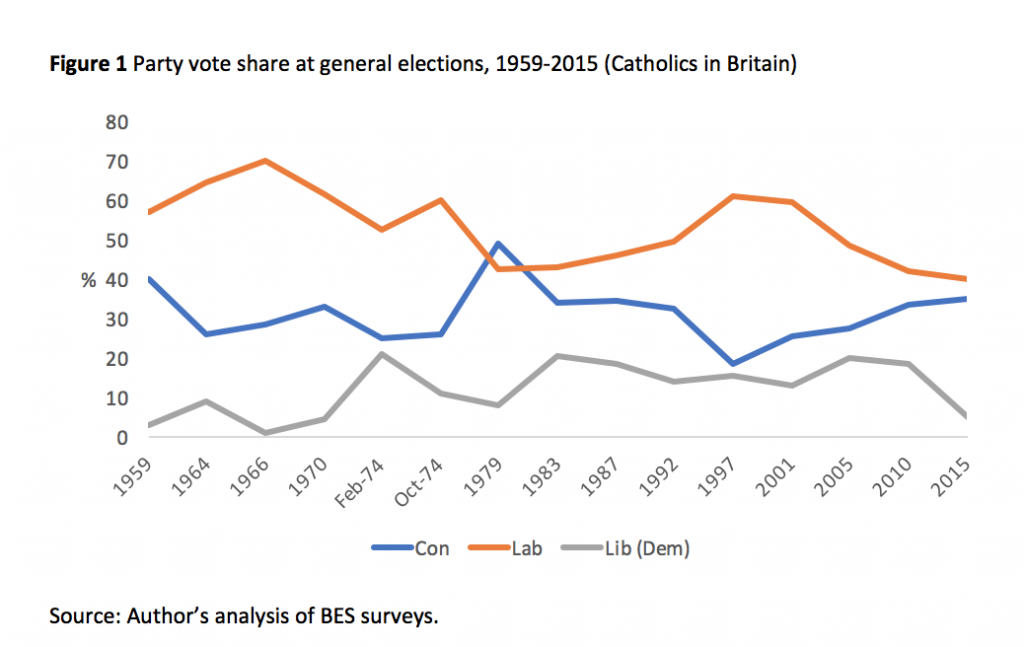 Another way of examining the party-denomination linkage is through parental voting patterns. Some of the BES surveys have asked individuals to separately recall the party which their mother and father usually supported. Responses from Catholics are charted in Figure 2. These data clearly show that, based on their own recollection, the party their parents usually supported was preponderantly Labour. Generally, the levels are not dissimilar for mothers and fathers. In the most recent iteration of this question in 2015, around three-fifths said their mother and father tended to support Labour, with around a 20-25% having supported the Conservatives, which is broadly in keeping with the earlier surveys. These data on parental voting patterns amongst British Catholics are pertinent given Tilley’s observation that:

Religion maintains its link with party loyalties via parental socialisation into both a religious and party identity when children are growing up. Religious voting is thus a relic of past associations between groups and parties: religious divisions remain because religion is a marker of parents’ and grandparents’ party affiliation from an era when religion did matter for policy choices and for voters. 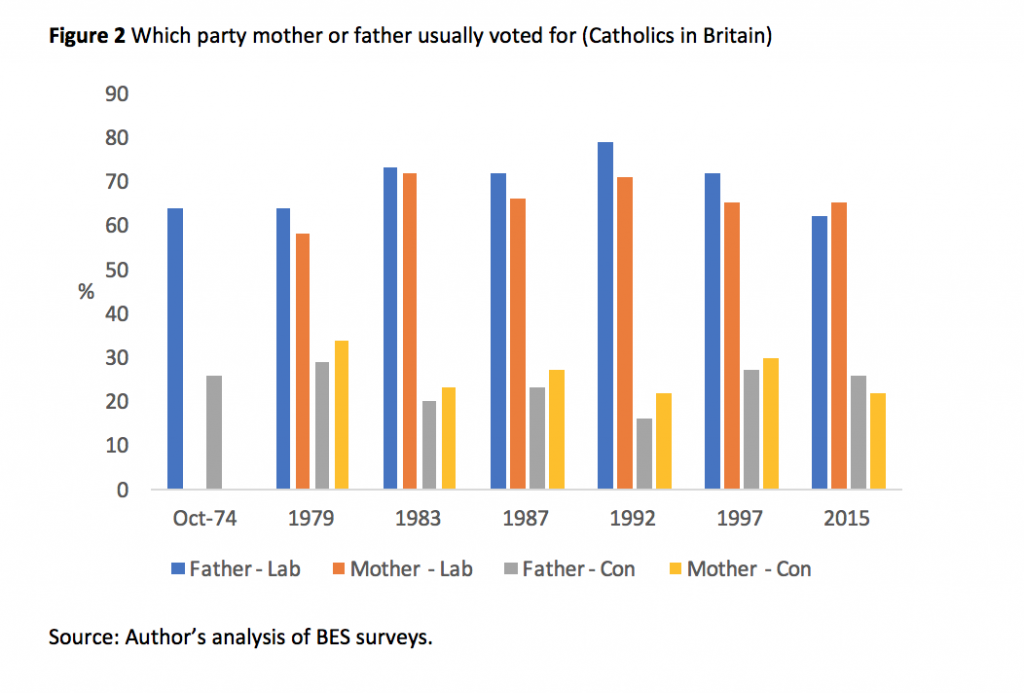 Alongside the BES, the British Social Attitudes (BSA) series is another key source for examining the associations between religious traditions and parties. Figure 3, covering recent decades, charts the party-political affiliations of Catholics in Britain, again for Conservative, Labour and Liberal (Democrat). As already shown with the evidence on electoral behaviour from the BES, the BSA data again show considerably higher support for Labour amongst Catholics over time. But, once again, a decline in allegiance is evident in more recent years. 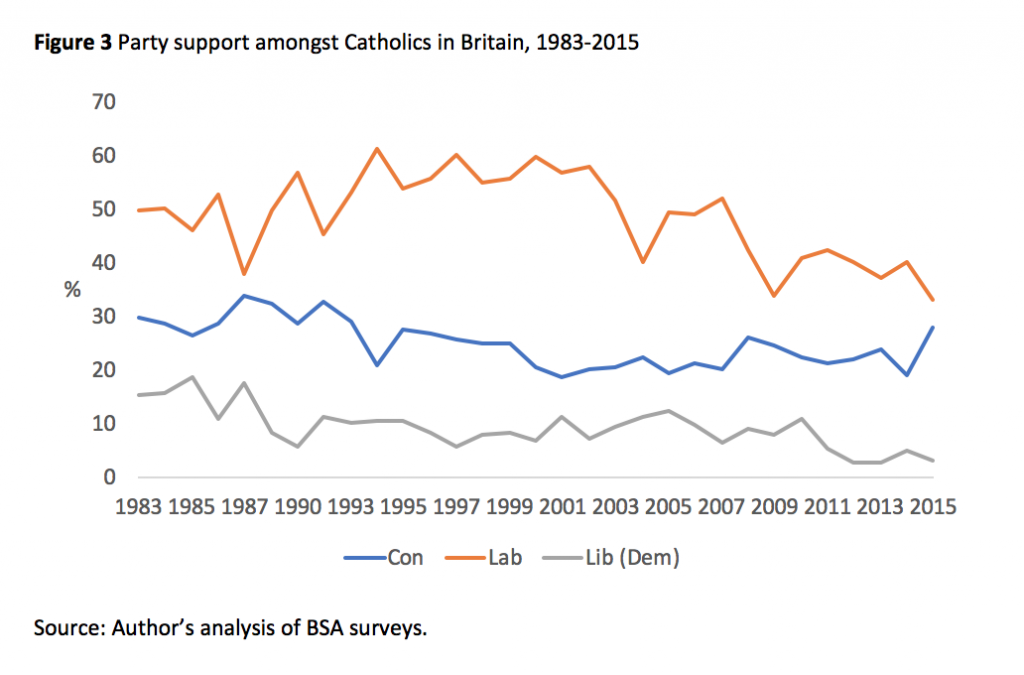 Catholics in England and Scotland

As well as looking more generally at the party preferences of Catholics in Britain, survey data allow us to examine whether there are different historical patterns at play within England and Scotland. Looking at general elections, Figure 4 shows that support for Labour has been more emphatic amongst Catholics in Scotland, consistently running at a higher level across recent decades. Analysis of the parental voting recall questions for Catholics in Scotland (available in the 1979, 1992 and 1992 Scottish general election studies) shows that mothers and fathers remembered as usually supporting Labour ran at very high levels. 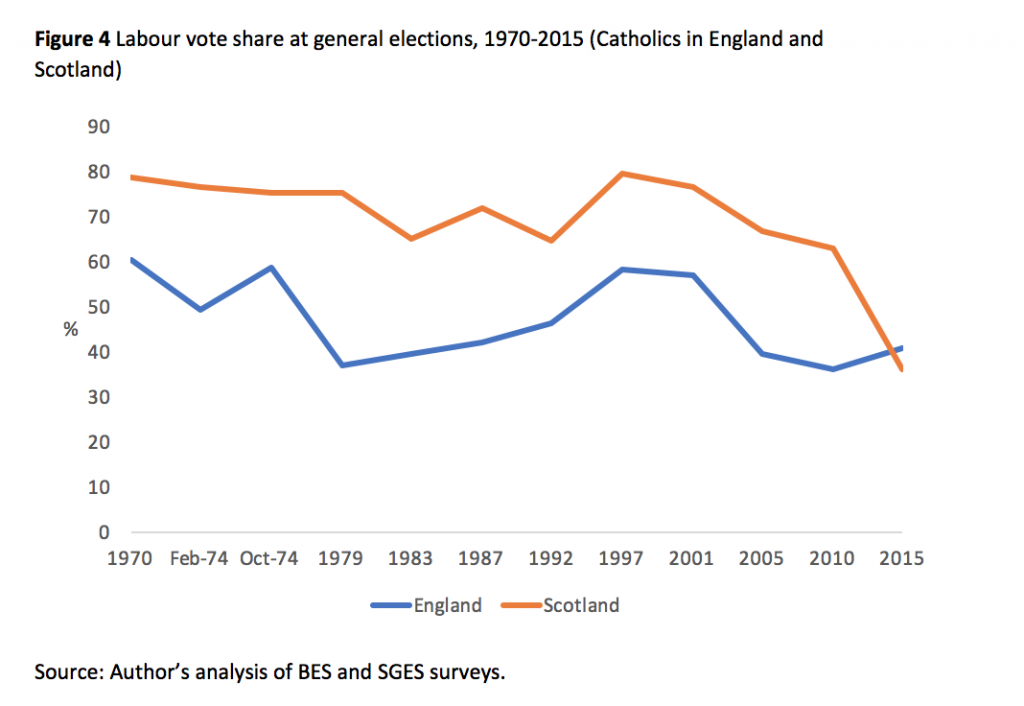 Levels of general party allegiance amongst Catholics in England and Scotland can also be compared over time, from 1999 onwards, using the BSA surveys for Catholics living in England and the counterpart Scottish Social Attitudes series (but which did not run in 2008 and the dataset for 2015 has not yet been released). Yet again, as displayed in Figure 5, the higher support for Labour expressed by Catholics in Scotland relative to those in England is clear, but support in both countries has been on something of a downward trajectory in recent years, particularly in Scotland. 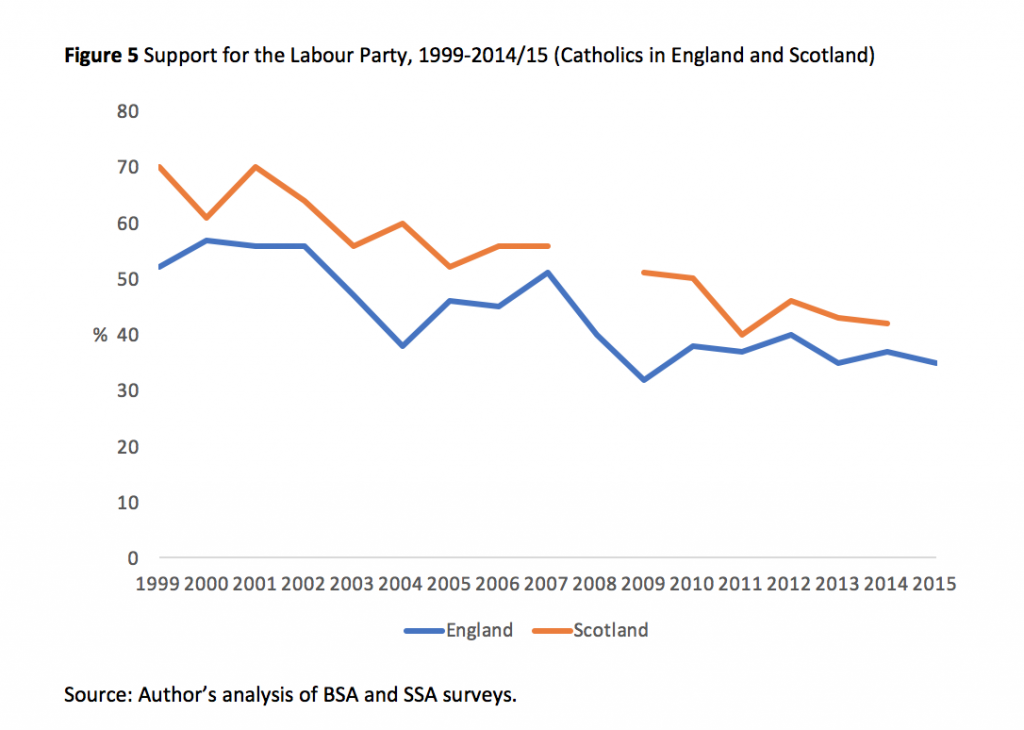 Variation in party support within the Catholic community

Charting the party-political differences across religious groups goes only so far in shedding light on whether and how contemporary religious factors affect political attitudes. Analysis of variation on political loyalties and attitudes within religious communities is also important, but this ideally requires surveys that specifically sample and are tailored to, the religious community in question. Britain has never had a survey series focused on the Catholic community in particular, unlike the USA, but a recent, nationally-representative survey of Catholic adults in Britain (aged 18+, n=1,062), conducted in June 2013 by YouGov for the Westminster Faith Debates, allows more in-depth analysis of the social and religious correlates of Catholics’ party affiliations. This survey contained questions on voting behaviour at the 2010 general election as well as party identification.

Generally, the long-term data from BES and BSA surveys clearly attest to the historically strong party-denominational linkage involving Catholics and Labour; as expressed through reported voting behaviour and recalled parental preferences. This linkage has been even more emphatic within the Catholic community in Scotland. However, the recent evidence also seems to indicate some attenuation of Catholic support for Labour, whether manifested in voting behaviour at general elections or in more general party allegiance.

More specific analysis of the sources of party support within the Catholic community showed that, inter alia, women and older people were more likely to express a preference for the Conservative Party (both voting and identification); those living in Scotland were less likely to.

Ben Clements is Lecturer in the School of History, Politics and International Relations at the University of Leicester. He has had two books recently published by Palgrave Macmillan – Religion and Public Opinion in Britain: Continuity and Change and Surveying Christian Beliefs and Religious Debates in Post-War Britain. He is a member of the project board for and a contributor to the British Religion in Numbers website and is co-convenor of the Political Studies Association’s specialist group on Politics and Religion.

Foolish, but no fool: Boris Johnson and the art of politics 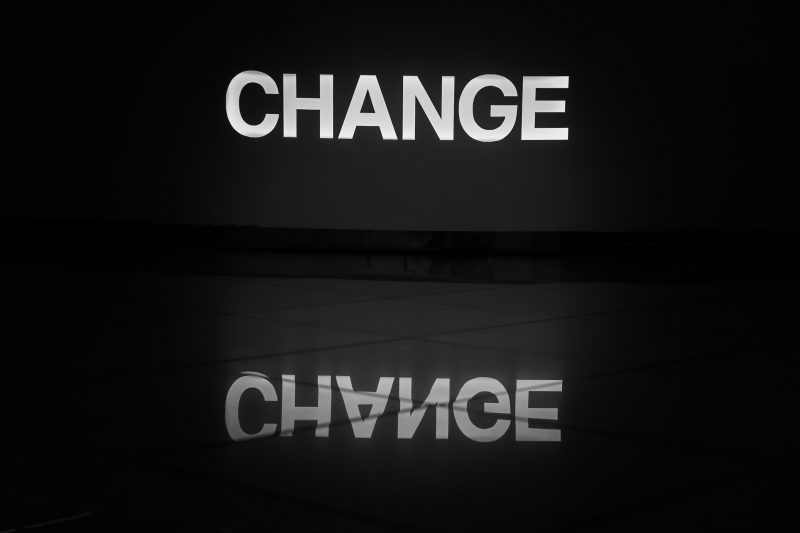 The impact of life events on turnout: habitual voting does not seem to be as resistant to change as often assumed