The recent failures of voter intention polls to predict UK election results has led to public scepticism about the usefulness of polls. Andreas Murr, Mary Stegmaier, and Michael S. Lewis-Beck deploy an alternative approach, which focuses on which party opinion poll respondents expect to win the election (rather than just on their voting intentions). This ‘voter expectations’ model predicts a solid Johnson majority, with the Conservatives gaining 360 seats, and Labour only 190.

The leading approaches to election forecasting are markets, models, and the polls. In Britain, these approaches have been mined heavily, especially via the use of polls asking about voter intentions. However, such polling produced gross prediction errors with respect to the size of the Conservative wins in 2015 and 2017.  Should the polls be abandoned and another methodology relied upon? We argue that the polls still have value, if the right question is asked. Specifically, voter expectations items (“who do you think will win?”) should be used, rather than voter intention items (“who would you vote for?”).

We base our citizen forecasting argument on theory and evidence. With regard to the former, voter expectations incorporate information from the respondent’s social network, generally a larger group than the respondent (who constitutes an N=1). With regard to the evidence, in a recent paper we examined eight regression equations, one utilizing voter expectations and the other seven utilizing voter intentions, applied to monthly survey data and election results (1950 to 2017). To assess the accuracy of the equations, we carried out step-ahead forecasts,

We can include these raw observations, in our prediction equations, in order to generate the forecast seat shares shown below in Table 3, which shows our voter expectation model compared with seven different variants of voter intention models. The voter expectations equation produces a forecast for the Conservatives of 360 seats, enough to ensure them not only a victory, but a comfortable one. It also generates a forecast for Labour of just 190 seats.

Note: The seven voter intention models shown here make different adjustments to ‘uniform national swing’ in projecting from opinion poll vote shares to the results in constituencies, and they also differ in how they lag votes. To see the detailed model specifications please go to the open access copy of our paper.

All of the seven voter intention equations render a lower seat prediction for the Conservatives, with three of them actually saying the Conservatives will fail to achieve an overall majority.  At this point, of course we do not know for certain, as these number are only forecasts.  But one thing we do know is that the citizen forecast for the Conservatives from the voter expectations equation is larger than for all the other equations, and the predicted Labour seats number is also much the lowest in Table 3.  In other words, the voter expectations model is out on a limb. So this contest promises to be a real test of the value of the citizen forecasting approach.

This article is based on the authors’ published work in the British Journal of Political Science.

Andreas Murr is Associate Professor of Quantitative Political Science in the Department of Politics and International Studies at the University of Warwick. His research focuses on election forecasting, the voting behaviour of immigrants, and the selection of party leaders.

Mary Stegmaier is interim Vice Provost for International Programs and an Associate Professor in the Truman School of Public Affairs at the University of Missouri. Her research focuses on voting behaviour, elections, forecasting, and political representation.

Michael S. Lewis-Beck is F. Wendell Miller Distinguished Professor of Political Science at the University of Iowa.  He has authored or co-authored over 290 articles and books, including Economics and Elections, The American Voter Revisited, French Presidential Elections, Forecasting Elections, The Austrian Voter and Applied Regression. 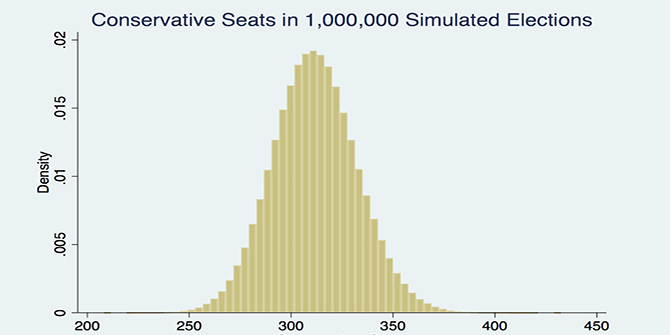