How well are GP-led Clinical Commissioning Groups equipped to handle contracts with private providers of NHS clinical services? In this article, Colin Leys finds that the case for outsourcing clinical work to private providers continues to lack evidential support, and that there should be an independent enquiry into the capacity of CCGs to handle major new contracts before they are allowed to be made.

The Public Accounts Committee has recently found that no-one within the NHS was accountable for the failed contract with the private company Circle to manage Hitchingbrooke hospital, stating that accountability for the contract was ‘fragmented and dispersed across the health system’. This builds on the PAC’s concerns about how the NHS managed the contract with Serco for the provision of out of hours GP services in Cornwall – where the NHS was found to be ‘deeply ineffective in managing Serco’s performance’.

These are just two high-profile examples of where contracts between the NHS and private providers have failed, in part due to poor contract management by the NHS. Yet, as a new report by the Centre for Health and the Public Interest points out, in the new NHS market the NHS must manage on a daily basis more than 53,000 contracts for the provision of services by private providers, ranging from GP services, dental care and pharmacy services, to community health services and secondary care.

More than 15,000 of these contracts – worth over £9 billion a year – are between local GP-led Clinical Commissioning Groups (CCGs) and private providers of clinical services, and account for 16 per cent of their total budget. The question asked in the report is how well are these bodies, which are responsible for ensuring that adequate health services are provided for their populations, equipped to handle contracts with these private providers, which now include large multinationals and private equity-backed companies.

Where high-profile failures of private providers of NHS care have come to light this has been because of whistleblowers or inspections by regulators, and not as a result of the monitoring of the contracts by the commissioning CCGs. To find out how CCGs monitor their contracts with the private sector the CHPI sent freedom of information requests to all 211 CCGs in England. Out of the 181 which responded, fewer than half could say how many site visits had been made to the private providers they had contracts with. Of those which did answer this question, 39 had made fewer than ten visits and 22 had made none. The average number of private provider contracts per CCG was 90.

In the Serco case, the former chair of the Strategic Health Authority involved in overseeing the contract stated that it was not in the culture of the NHS to levy fines and penalties on providers. Consistently with this, the CHPI report finds that 149 Clinical Commissioning Groups had imposed no financial penalties on private providers to enforce the quality performance of their contracts, as provided for in the standard NHS contract, and 133 had issued no contract query notices. Out of more than 15,000 CCG contracts with private providers, just seven had been terminated.

The CHPI survey also discovered that most CCGs have contracted out their contract monitoring and commissioning functions to Commissioning Support Units (CSUs). Initially formed from former Primary Care Trust staff, CSUs are currently ‘hosted’ by NHS England, but they already operate like businesses and from April 2016 they are due to become fully private companies. This means that although CCGs are legally accountable for their contracts, those that use CSUs will in future be reliant on private companies to ensure that private providers of healthcare deliver safe, high-quality NHS services. And this is likely to further fragment and disperse accountability for the £9 billion worth of NHS contracts that CCGs hold with the private sector.

Knowing how CSUs operate is already a challenge. They currently employ some 8,500 staff and receive £700 million in payments from Clinical Commissioning Groups. But the CHPI survey revealed that CCGs either can’t or won’t say much about what their CSUs do, and freedom of information requests to individual CSUs are referred to NHS England.

Once CSUs become fully independent companies in 2016 this barrier will be reinforced. One CCG told the CHPI that the interest of its CSU in preserving its commercial confidentiality ‘outweighs the public’s right to know how public funds are spent’.

The case for outsourcing clinical work to private providers continues to lack evidential support. Now, unless the outsourcing of commissioning itself is reined in, gathering evidence is likely to become impossible.

The CHPI report concludes that before any major new contracts are made with private providers there should be an independent enquiry into the capacity of CCGs to handle them. It also urges that the privatisation of contract management needs to be reconsidered, if the billions of public money that CCGs are already spending on private providers are not to become unaccountable. CCGs should instead be required to publish regular updates on all their contracts and how they have been performed, ensuring that accountability is not allowed to disappear behind a screen of commercial confidentiality.

Note: This article gives the views of the author and not the position of the British Politics and Policy blog, nor of the London School of Economics. Please read our comments policy before posting.

Colin Leys is an emeritus professor at Queen’s University, Canada, and honorary professor at Goldsmiths, University of London. Since 2000 he has written extensively on health policy. He is co-author with Stewart Player of Confuse and Conceal: the NHS and Independent Sector Treatment Centres. 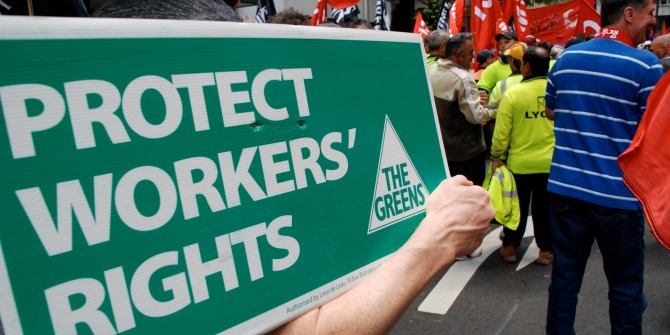