Can citizens forecast the outcome of the UK election? In this post, Andreas Murr presents the results of his forecasting model, which predicts constituency level results by asking citizens in each constituency which party they think is likely to win in their area. The forecast suggests that there will be a hung parliament, with the Conservatives as the largest party.

Citizens forecast a hung parliament with the Conservatives as the largest party – about 30 seats ahead of Labour. Citizens forecast also that the Liberal Democrats will win fewer seats than the Scottish Nationals. Citizens made these forecasts in a large-scale YouGov survey that I commissioned using a grant from the John Fell OUP Research Fund. In February and March, the survey asked about 17,000 citizens across all 632 mainland constituencies who they think will win in their constituency in May 2015.

Surveys asking citizens who they think will win are among the most accurate methods for forecasting US presidential elections (Graefe 2014). The so-called “citizen forecasts” are more accurate than expert judgement, vote intention polls, prediction markets, and structural models in predicting who wins and by how much. Why is that?

In the past, citizens have accurately forecasted most constituencies and all Prime Ministership in Britain. I found survey data for seven British General Elections between 1964 and 2010 to test the accuracy of citizen forecasts. In all of them, the surveys of the British Election Study asked citizens before or during the campaign who they think will win in their constituency. I then predicted the constituency to be won by the party who most citizens said will win. Across all elections, this prediction rule correctly forecasted 85 per cent of constituencies. Figure 1 shows that in every election, individuals were better than chance in predicting who would win in their constituency, and that groups were even better. 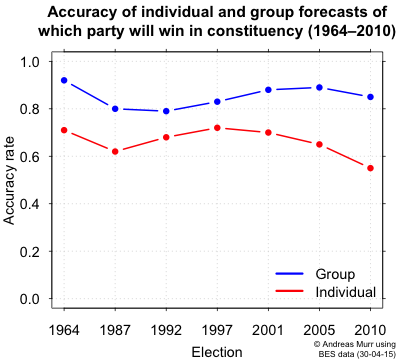 For the current election, I use the same prediction rules as above: I predict the constituency to be won by the party who most citizens say will win it, I count for each party the number of constituencies that it is predicted to win, and then I predict the Prime Ministership to be won by the party who is predicted to win most constituencies. The graph below shows the forecasted number of constituencies that each party will win. As the figure demonstrates, citizens forecast that the Conservatives will become the largest party with 292 seats, followed by Labour with 262 seats, the Scottish National Party with 40 seats, and the Liberal Democrats with 28 seats. These forecasts imply that it is very likely that no party will receive an absolute majority, that the Conservatives will win the Prime Ministership, and that they will need one or more coalition partners to govern. 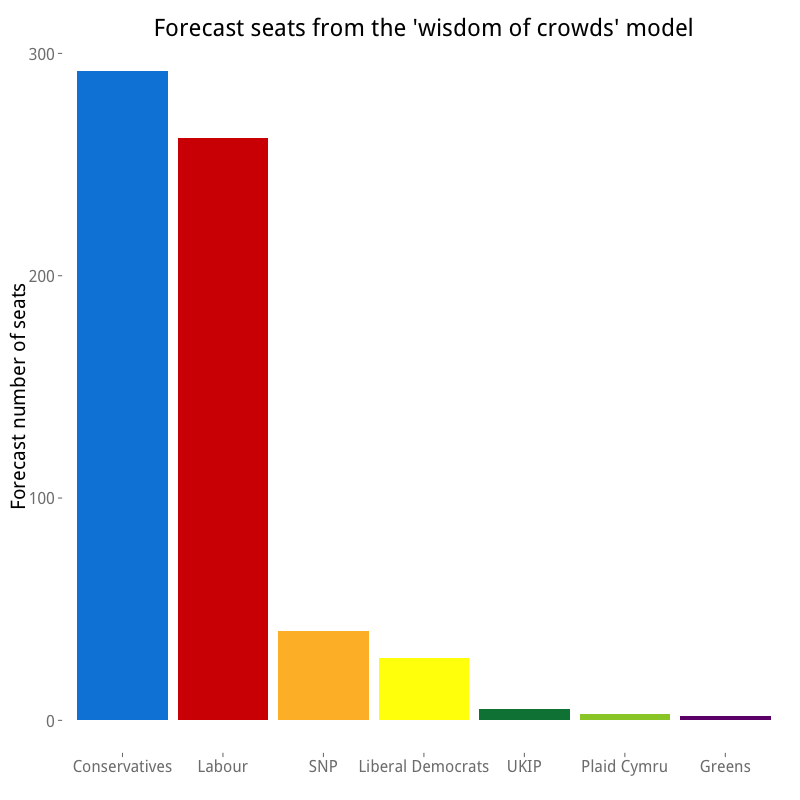 In sum, citizen forecasts are direct and accurate and comprehensible. Pollsters and political scientists should collect them and communicate their results before every election occurs. If the goal is to forecast who wins and by how much, citizen forecasts provide a simple and successful way to do so.

Andreas Murr is Lecturer in Quantitative Methods in Political Science at the Department of Politics and International Relations. His research focuses on quantitative methods and election forecasting. In one recent article he shows that “delegating and weighting” citizen forecasts by competence increases forecasting accuracy; in another he uses party leadership elections as a form of citizen forecasting to predict who becomes Prime Minister.