England’s top comprehensive schools are often socially selective, writes Carl Cullinane. He outlines the evidence that supports this claim as well as the implications of current policy, and explains what needs to change in order to ensure a fairer admissions process, so that more disadvantaged pupils can access the best schools.

March saw the arrival of the annual National Offer Day, with around half a million families across England discovering which secondary school their child will be attending from September. As application rates have increased in recent years, this process has become more and more competitive, with many schools, particularly the better ones, increasingly oversubscribed.

While the pressure on places varies by area, in some local authorities anything up to half of children will miss out on their first choice school, with the number of those missing out increasing in most areas. In fact, one in seven schools are at or over capacity, with that figure set to increase given the expected growth in applicant numbers in the near future. So with so many comprehensives oversubscribed, how fair is the process of getting a place?

In 2006, research by the Sutton Trust revealed the extent to which England’s top performing comprehensives, were, in effect, highly socially selective. Disadvantaged children eligible for Free School Meals were significantly under-represented in the 200 schools with the highest attainment, with substantially lower rates than the typical comprehensive, but also lower even than the neighbourhood surrounding the school.

In the context of major changes to the education policy landscape in the intervening 11 years, including a substantial shift from local authority-controlled admissions, to schools managing their own processes via academisation, the Trust’s new Selective Comprehensives 2017 report looks at whether this picture has changed.

This year also sees the school league tables, by which a school’s performance is assessed by parents and education authorities alike, changing significantly. Up until 2016, the headline ranking was based on the proportion of pupils in a school achieving 5 A* to C grades at GCSE, including English and Maths (5A*CEM). This has been replaced by the new Progress 8, which measures how pupils progress across a range of eight subjects in comparison to their ability before entering secondary school. This shift means less of a ‘reward’ for schools taking in pupils with high prior attainment, with potential consequences both for how schools view their intake and how parents’ perceive the best schools. 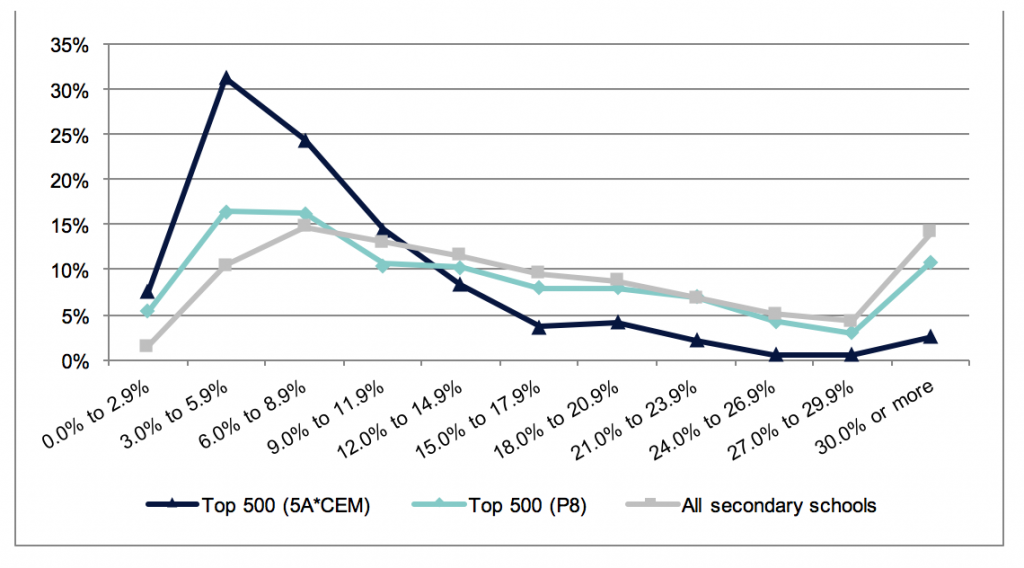 The top performing 500 schools using the traditional 5A*CEM measure continue to be highly socially selective, taking just 9.4 per cent of pupils eligible for Free School Meals (FSM) – just over half the rate of the average comprehensive (17.2 per cent). While roughly half of this gap can be attributed to the location of high attaining schools in catchment areas with lower numbers of disadvantaged pupils, the rest is due to social selection in admissions occurring even within those neighbourhoods. 85 per cent of schools in the top 500 admit fewer FSM pupils than live in their catchment area, with over a quarter having a gap of five percentage points or more, indicating they are substantially unrepresentative of their locality.

However, as can be seen in Figure 1, the best 500 schools measured by the Department for Education’s new ‘Progress 8’ measure have FSM rates much closer to the national average (15.2 per cent). They are also less socially selective, with a third of these schools actually admitting more FSM pupils than their catchment area.

These schools are more accessible, have higher intakes of disadvantaged pupils, yet perform strongly for their pupils. Only 270 schools are in the top 500 using both measures, indicating that there is a substantial group of prestigious, high-attaining schools, owing much of their success to a privileged intake with high ability in the first place.

Nonetheless, while a rebalancing of how schools are valued is welcome, there should be no complacency that the problem of social selectivity has been solved. Progress for pupils is highly valuable, but it is absolute levels of attainment that open doors for disadvantaged pupils to university and beyond. So, access to schools that excel in terms of both progress and high achievement is essential, and this group of 270 schools remain very selective, with average gap of 3.5 per cent between the school FSM rate and that of their catchment area. 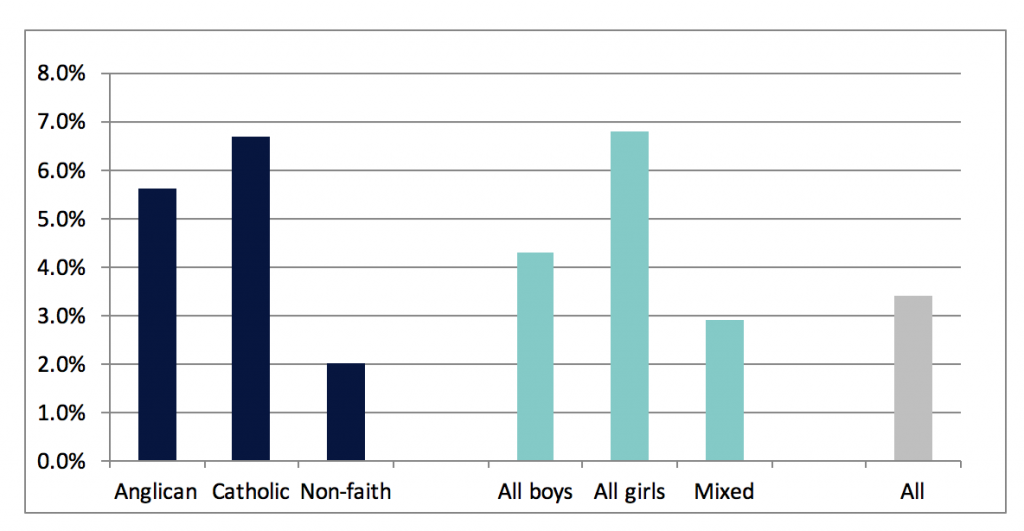 Social selection in a comprehensive system occurs through a variety of mechanisms, including the nuances of complicated school admissions codes, information availability, and parental choice. One of the ways the latter manifests itself is through the property market. Surveys frequently show that parents are willing to move house to live in a particular school’s catchment area, and this is borne out in their behaviour, with our research showing that houses in the catchment areas of top schools generally cost about 20 per cent more than a typical house in the same local authority. 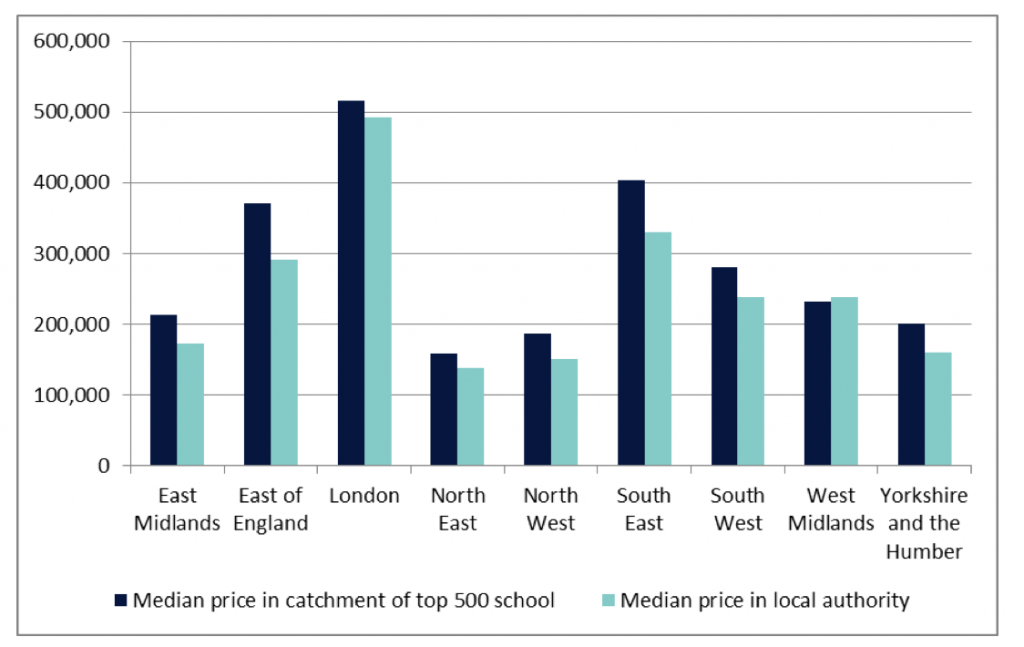 House buyers willing and able to pay a substantial premium to live in the catchment area of a top school are likely, over time, to lower the accessibility of the school to those from disadvantaged backgrounds. This undermines the nature of the comprehensive system, and introduces an element of de facto selection based on ability to pay.

Several responses to the Sutton Trust report, including from the Department for Education themselves, have used this as an argument for expanding grammar schools, which ostensibly select based on ability. However, grammars are in fact substantially more socially selective, with Free School Meal rates of around 2.5 per cent, well below that of the best comprehensives. Expanding grammar schools in their current form, without radically overhauling their accessibility to less well-off pupils, would increase rather than reduce barriers to opening up more good school places to children from across the socio-economic spectrum.

Instead, a reduced emphasis on proximity in school admissions would allow fairer access to the best schools and limit socially divisive house buying incentives. The Sutton Trust recommends two methods in particular: ballots, where a proportion of pupils (around half, ideally) are selected randomly; or banding, where applicants are tested and places allocated equally across a range of ability levels. In combination with better information availability and improved transport provision, ballots and banding can be used to ensure a fairer admissions process, enabling more disadvantaged pupils to access the best schools and promoting a genuinely comprehensive system.

Note: a version of this article has also been published by the Sutton Trust and draws on this report.