Looking at past pandemics, Costas Milas expects the economic downturn caused by the novel coronavirus to be significant but temporary. He also explains why some wages rise during such episodes and why unemployment benefits must rise as well.

Diseases cause panic and take a significant social and economic toll. The Black Death, for instance, which lasted between 1348 and 1350, killed between 75 million and 200 million people worldwide and about half of the population in England. It also contributed to a dramatic cumulative GDP fall of 29% and to a ‘flight-to-safety’ increase in the price of gold by 8% between 1348 and 1351. Nevertheless, as a consequence of the scarcity of labour, real farm wages in England went up (cumulatively) by 116.2% whereas real wages of building craftsmen went up by ‘only’ 42.6%, which makes sense if we consider that avoiding a disruption in farm production was a priority. At the same time, flight from cities led to a downward pressure on rents and, therefore, the incomes of the upper class. Last, but not least, the English Parliament was prorogued several times in 1349 and only met again in 1351.

Some of the above observations were repeated during the 1918-1919 Spanish flu pandemic, estimated to have killed 40 million people worldwide. It is difficult to separate the economic effects of the Spanish flu from those of World War I because wartime production arguably put upward pressure on wages as a result of rising labour demand. Nevertheless, research has found that US manufacturing wages increased; indeed, US cities that had greater influenza mortalities experienced higher real wage increases. Data from the UK suggests that the real wages of building labourers in London went up (cumulatively) by 34.2% in 1918-1919, whereas real GDP in the country fell by 6%. On the other hand, house prices increased (cumulatively) by 20.3% in 1918-1919. In Sweden, which was not involved in World War I and so more clear-cut references can be made about the economic consequences of the Spanish flu, the pandemic affected incomes from stocks and rents negatively, whereas wage rates were not affected. Last, but not least, the price of gold increased (cumulatively) by 6.1% in 1918-1919.

Notice some parallels with today’s economic situation. As stock markets drop on fears of a coronavirus-related economic slump, the flight-to-safety investment strategy repeats itself. Indeed, the price of gold hit a seven-year high before dropping again as investors sold gold to cover their losses elsewhere, which serves as a reminder that although gold is a flight-to-safety investment strategy, there are periods in time that it loses, at least temporarily, its safe haven status. 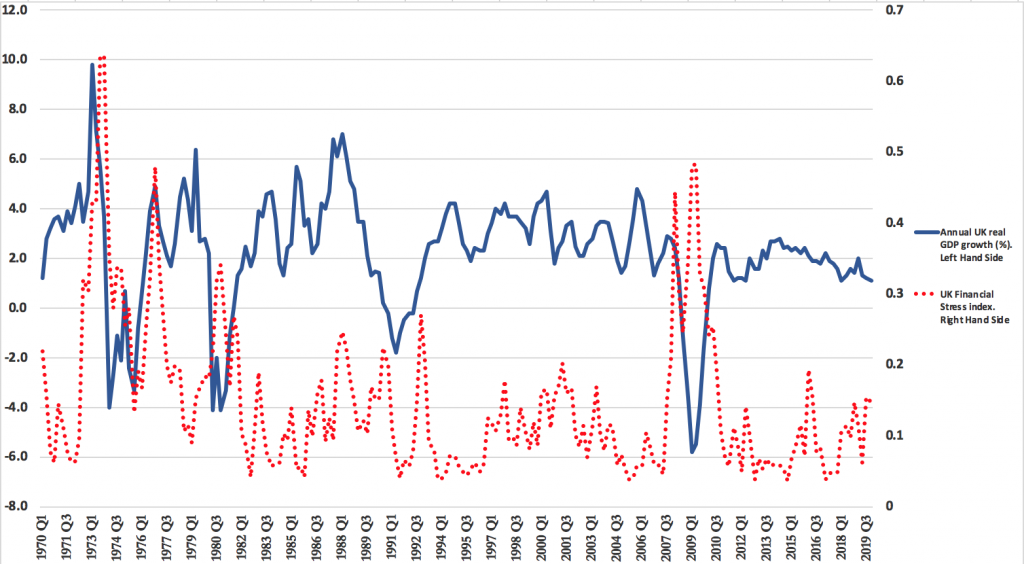 Financial stress is a good predictor of future movements in real GDP growth. From a historical point of view, a rise in financial stress signals a slowdown in UK growth between one and three quarters prior to growth turning negative. Although data for the first quarter of 2020 is not yet published, we know that financial volatility is on the rise which suggests a significant hit to the economy.

Many will feel uncomfortable at the prospect of central banks taking additional quantitative easing measures to support the economy. Quantitative easing, or large-scale asset purchases, refers to monetary policy actions whereby central banks purchase predetermined amounts of government and corporate bonds in an attempt to inject money directly into the economy. There is pressing need for policy-related action because economic policy uncertainty, both in the UK and worldwide, is on the rise. This halts investment planning and undermines productivity. At the same time, the confidence of our business leaders in the economy is being affected.

Still, with current government bond yields at extremely low levels, it is questionable whether further quantitative easing is an effective way of suppressing sovereign interest rates further and reviving the economy in terms of injecting additional liquidity. In fact, Chris Martin and I have recently shown that quantitative easing loses its effectiveness at very low interest rates. Notice, however, that sovereign interest rates dictate, to a large extent, corporate interest rates within a particular sovereign. Mid-March saw, at least temporarily, an increase in government yields and an even sharper increase in corporate yields. This forced the Bank of England and other central banks to intervene by authorising additional quantitative easing which, in effect, acted as a ‘catalyst’ in driving (again) government bond yields down. Whether this translates also into lower corporate yields remains to be seen. This is because firms are currently operating in (dangerously) sliding supply and demand conditions which makes it more likely than not that they will have to lay off workers even if they secure temporary government support. This is why, as I mentioned above, unemployment benefits need to rise.

Looking at the history of pandemics, there is hope that some wages will have to rise. This should definitely apply, as a matter of urgency, to those who are currently on the front line, such as nurses, whose starting salaries took a hit in real terms after the last financial crisis.

There is another lesson from the economic effects of past pandemics and earlier recessions. As the Economics Editor of the Sunday Times recently noted, recessions tend to be short-lived. If history were to repeat itself, the chances are that we will witness a deep economic downturn. Forecasters predict that the looming economic downturn will be a ‘V-shaped’ rather than a ‘U-shaped’ one. In other words, the downturn should be significant but temporary. To what extent history will repeat itself remains to be seen.