New figures released by the government show that £43.5 million is currently owed in child maintenance arrears within the new statutory maintenance system which began full operations two years ago. Janet Allbeson explains that with no key performance indicator for the collection of arrears, and with enforcement action falling, it is hard to be optimistic that the government will be effective in tackling non-payment. In the meantime, bills can’t be paid and children go without.

In November 2014, the then Minister for Child Maintenance declared:

For too long, a minority of absent parents have got away with failing to pay maintenance, leaving families without that financial support. This government is determined to take action to tackle this kind of irresponsible behaviour and support families.

At the time, Gingerbread – whilst welcoming implementation of this new measure – expressed some scepticism as to whether it heralded a new approach by government to get tough with those who failed to pay their child maintenance liabilities. We pointed out that:

Gingerbread warned that, unless the government is prepared to follow words with action, non-resident parents determined to avoid paying for their children were unlikely to take much notice.

So what has happened since March 2015? On 25 November 2015, MP Karen Buck asked a parliamentary question: In how many cases had relevant information on child maintenance debts been supplied to credit reference agencies in the previous eight months? Cut through the flannel, and the answer was none at all. The flannel? Minister Priti Patel said that information had been shared with credit reference agencies – but this was “solely for sampling purposes as part of a pilot.” She failed to mention that this pilot had taken place eight years earlier – in 2007.

The Minister went on to say that “from the 30th November 2015” (in other words five days after the question had been asked) the Child Maintenance Group would start to issue written warning notices on all child maintenance debt cases with a liability order. And, if payment was not received, “the intention is to commence supplying this information to credit reference agencies in early 2016”.

Good news at last? Is the Child Maintenance Group finally getting serious about child maintenance debt collection? It is hard to be optimistic. The chart below shows the continuing fall in liability orders applied for by the Group – orders needed before a case is referred to a credit reference agency. The biggest fall follows the Department for Work and Pensions’ 2012-2017 strategy for child maintenance arrears collection and compliance, since when enforcement activity has been expressly cut back to focus on current payments. 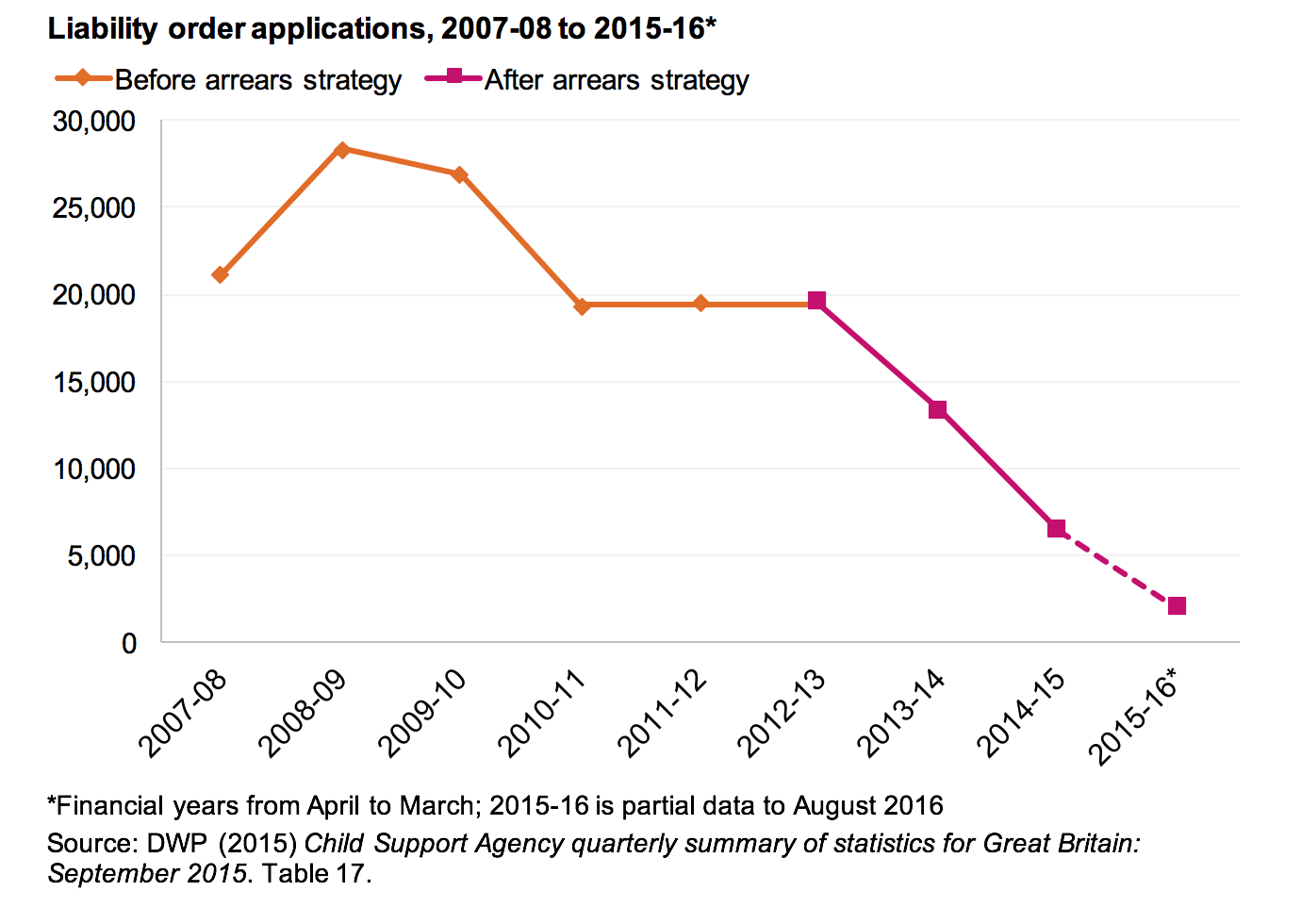 Yet – with the latest statistics showing that half (49 per cent) of all 133,700 paying parents in the new Child Maintenance Service having child maintenance arrears totalling £43.5 million, there is little sign that current liabilities are now being fully met.

At present, the Child Maintenance Group has no key performance indicator for the effective collection of maintenance arrears for children. This is badly needed. The flaw in the Department for Work and Pensions’ current strategy of deprioritising arrears collection is that unpaid child maintenance is not just past history. It means bills can’t be paid, savings are run down, and children go without. And for single parents owed maintenance, it also means the continuous stress of trying to press a sluggish and reluctant Child Support Agency or Child Maintenance Service to take action against those parents determined to avoid their responsibilities. This is unacceptable and has to be addressed by the government.