Since the election of the Coalition in 2010, there has been a massive campaign of sanctions – punitive stoppage of benefits – against unemployed people. Indeed, the rate of Jobseeker’s Allowance (JSA) penalties doubled. Yet there is very little evidence to support the sanctions approach in the UK and, aside from whether they return to work or not, the economic literature is missing any consideration of the overall effects on the people who are penalised, both positive and negative. In light of this, David Webster argues that a Comprehensive Review of the whole approach is needed.

Despite the Department for Work and Pension’s (DWP) often-repeated claims that sanctions ‘are only ever used as a last resort for a very small minority’, over the five years to March 2014 about one quarter of all JSA claimants had their benefits stopped for a range of alleged ‘failures’, usually trivial. An example, unusual only in being fully documented, is of a 53-year old man with four children, who lost his benefits for at least four weeks for being ten minutes late for a CV-writing course. He was hard of hearing and had misheard the date of the appointment. 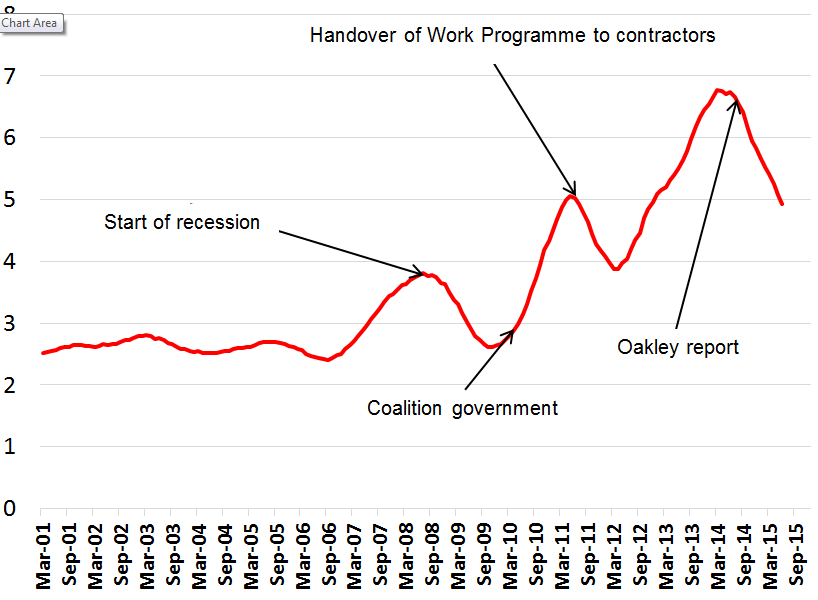 Note: Sanctions before challenges have been estimated by adding back those subsequently overturned to the post-challenge sanctions shown in the DWP’s Stat-Xplore database.

Not only are there more sanctions, but since 2012 they are more severe, lasting for up to 3 years. Whereas in the magistrates’ courts the scale of fines runs from £200 (level 1) to £10,000 (level 5), for jobseekers the penalties now run from £292.40 up to £11,403.60. Magistrates have to take into account offenders’ ability to pay, whereas DWP never does. And offenders in the courts have the protection of a public legal process before any penalty is imposed, while DWP imposes the penalties through a secret, purely administrative process in advance of any hearing. There is a system of discretionary ‘hardship payments’, but it works so badly that sanctioned homeless claimants are as likely to commit ‘survival crime’ as to get a hardship payment. There is an appeals process, but it only begins after the sanction has been imposed; if an appeal is successful, the money is repaid only after the sanction has been served, so the damage suffered is often not made good. Although two out of three JSA appeals are successful, only one in five sanctioned JSA claimants actually makes an appeal. Not surprisingly in such a system, there is a high incidence of wrongful sanctions.

The social damage from sanctions includes worsened health, hunger and resort to food banks, damage to family relationships, debt, homelessness and increased crime (as documented by a report from the LSE Centre for Economic Performance). The economic damage includes people being pushed into worse jobs that don’t last, claimants’ and employers’ time being wasted through pointless job applications, diversion of government resources away from constructive employment support, and worsening of those employment services.

The problems of the sanctions system are compounded by slovenly administration – again, likely to occur in a system lacking accountability. For instance, the DWP recently admitted that one in 14 of sanctioned JSA claimants in 2014 were not notified of their sanction, meaning that about 279,000 claimants over the life of the Coalition were not notified. And because the DWP does not record the date of alleged ‘failures’ on its computer systems, it has no idea how many people are subjected to the longer sanctions which are imposed for ‘repeat’ offences, and cannot identify them for the purpose of evaluation.

Of course, there is an economic rationale for sanctions. If (and it is a considerable ‘if’) the things that government requires of claimants do genuinely raise their chances of work, then one would expect to find positive effects on employment. And indeed, economists have produced evidence from various European countries (there is none from the UK) that sanctions produce some, usually small, effects in getting people into work. What, however, is missing from the economic literature is any consideration of the overall effects, both positive and negative. So, for instance, the Organisation for Economic Co-operation and Development is a longstanding advocate of sanctions, but its studies take no notice of anything outside the narrowly defined economic literature. Its recent report on UK active labour market policy, despite being published at a time of widespread controversy about sanctions, simply ignored the abundant adverse evidence from the voluntary sector which was freely available on the web.

Arguably, at the root of the problem is an attitude among many economists that it is their role to make abstract proposals and for lesser minds to work out the administrative details. This is naive. There is a big difference between an ‘active labour market policy’ which offers training and support on a voluntary basis, and one which relies on compulsion. In the former, the support is likely to be useful to its recipients, since they would not accept it otherwise (this is a case of the gains from trade, which is not undertaken unless it makes both parties better off). But in the latter, anything can be palmed off on its helpless subjects.

Moreover, a system which gives a state bureaucracy the power to subject poor people to severe penalties (in this case loss of their only means of subsistence for extended periods), without the safeguards which centuries of experience have shown are essential to the judicial system, is bound to be abused. Whether that abuse comes without authorisation, from junior officials, or (as appears to be the case in the current British sanctions campaign) as a matter of policy from the highest levels of government, makes no essential difference. There is no excuse for economists to sidestep the fundamental issues of jurisprudence which are involved in the whole concept of a compulsory ‘active labour market policy’.

There has been some falling-off of sanctions in the last year or so. This may have something to do with the many criticisms made by the Oakley Review. Since then, the House of Commons Work and Pensions Committee has produced an even more strongly critical report, which points out the absence of evidence to justify many features of the system, and repeats its call for a comprehensive, independent review. To date, the government has refused to concede this, or to carry out any of the studies asked for by the committee which would test the assumptions of the system. A comprehensive review is clearly now what is needed.