Internal disagreements within the Conservative Party over the campaign rules and timing of the UK’s EU referendum have occurred in recent weeks, with 27 Conservative MPs voting against the government in favour of an amendment to the EU Referendum Bill, which was nevertheless defeated in a vote in parliament on 16 June. Paul Webb and Tim Bale write on the attitudes of UK party members toward the EU and David Cameron’s proposed renegotiation of the country’s membership terms. Citing recent survey evidence, they illustrate that while a large majority of Conservative Party members are open to voting to stay in the EU, those members who are most willing to campaign are also those most likely to back leaving if the renegotiation fails.

New research on the attitudes of party members across the UK points to the challenge before David Cameron if he is to achieve a “yes” vote on the EU referendum without splitting his party badly. Cameron wants to re-negotiate the terms of UK membership of the EU, and then obtain a majority in the referendum for continued membership on those terms.

A survey of party members that we conducted shortly after the general election reveals both good news and bad news for the prime minister. The good news is that just 15 per cent of Conservative Party members would vote for the UK to leave the EU – regardless of whatever reforms Cameron manages to negotiate. Nearly two-thirds (63 per cent) say their decision would depend on the outcome of the negotiations; one in five say they would vote to stay in the EU no matter what.

So, a clear majority of the Tory grassroots would vote to stay in, or are at least persuadable, depending on the outcome of negotiations. That’s all encouraging for the prime minister. The problem is, what happens if he cannot persuade his members that he has achieved reasonable terms for continued membership?

Members on the edge

There are two clear dangers in this for the Conservatives. The first is that they will split and some may ultimately quit the party. Some may even defect to UKIP, the party with the most uncompromisingly hostile position towards British membership of the EU.

This is not an insignificant threat to the Conservatives. In a 2013 survey of Tory members, we found those who were most likely to foresee the possibility of their eventual defection to UKIP were also the most likely to insist on leaving the EU, even if the government were able to negotiate a significant repatriation of sovereign powers to the UK. Clearly, EU withdrawal is a touchstone of dissent for rebellious Tories. It is certainly not far-fetched to imagine a scenario in which a Conservative Party badly divided on the referendum question eventually haemorrhages members, councillors, MPs and voters to UKIP (or less dramatically, perhaps, to apathetic non-participation in party politics).

The second danger lies in the loss of a valuable organisational resource. Notwithstanding the clear financial advantage the Conservatives enjoyed over all other parties during the election campaign, research suggests that the local campaign efforts of volunteer activists still make a significant difference to electoral returns at the constituency level.

Of course, it is not only the Conservatives for whom the referendum carries risk. Recent media reports point to various concerns among Labour strategists too. If they end up campaigning with Cameron (presumably) for continued membership, will they somehow be tarnished in the eyes of their usual supporters, as they appear to have been in the Scottish independence referendum? And might they further alienate elements of their core working class supporters who appear tempted by UKIP? On the other hand, to oppose EU membership would surely further damage the party in Scotland, where support for the EU is generally greater than in England.

At least Labour can take solace in the very clear steer provided by its own membership. Few (only 5%) favour British withdrawal from the EU regardless of any renegotiations. Indeed – apart from UKIP, whose membership is implacably opposed to continued UK membership under any circumstances – the other main party memberships take a remarkably consistent line on the issue, as shown in the table below.

Table: Views of members of British political parties on the EU referendum 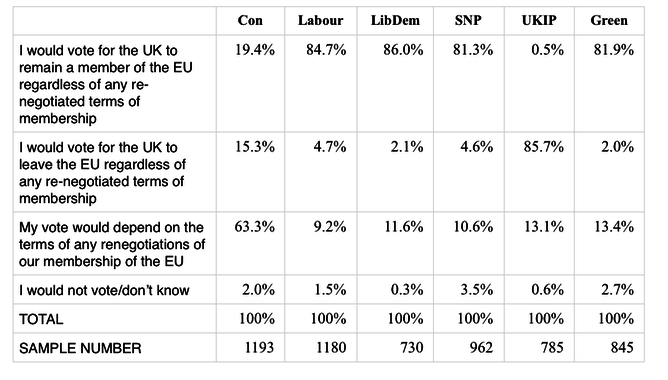 As many as 85 per cent of Labour members declare that they will vote to stay in regardless of the outcome of any negotiations, as do 86 per cent of Liberal Democrats, 82 per cent of Greens and 81 per cent of SNP members. The greatest underlying threat to party unity from the referendum, then, would seem to lie with the Conservatives. It will take consummate political skill on the part of the leadership to navigate the waters of the referendum campaign without being holed below the waterline.

Note: This article was originally published on The Conversation. Read the original article. The article gives the views of the authors, and not the position of the British Politics and Policy, nor of the London School of Economics. Please read our comments policy before commenting. Featured image credit: Number 10/Arron Hoare (Crown Copyright)

Paul Webb is Professor of Politics at the University of Sussex, and has held a number of previous and visiting positions in Britain and abroad, including at the Australian National University. He is an elected Academician of Social Sciences and a Fellow of the Royal Society of Arts. 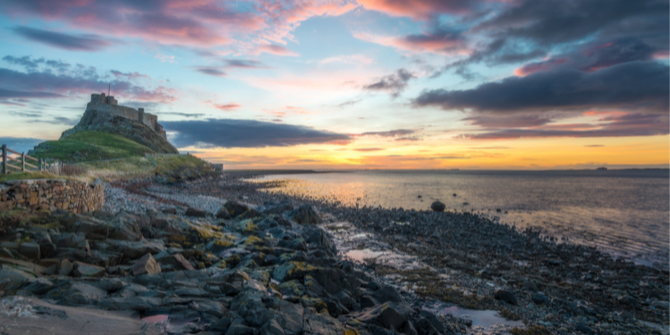