To fully understand the effects of COVID-19 on the benefits system, we need to go beyond official poverty statistics currently used by the government, argues Daniel Edmiston. He explains how doing so reveals an increasing depth of poverty, as well as considerable changes in those most affected by it.

What does it mean to say someone is living in poverty? According to the UK government’s official measure, people are in poverty if they fall below a certain proportion (60%) of average incomes. Whilst this can be an important measure, it actually tells us very little about the changing economic security of those living, to varying degrees, below the poverty line. To illustrate this, there are two stories of poverty that currently divide popular opinion on what is currently going on in the UK.

The first story concerns the increasingly acute forms of financial hardship bearing down on the lives of many low-income households. Destitution is widespread amongst those with No Recourse To Public Funds. Housing insecurity and homelessness have grown considerably. The number of emergency food parcels given by the Trussell Trust has mushroomed: from 346,992 in 2012/13 to 1.9 million in 2019/20. Some children are moving onto a subsistence diet as a result of COVID-19 and increasingly difficult decisions are being made between heating and eating.

By contrast, the second story of poverty suggests very little has changed in terms of relative poverty over the last decade. There has been a remarkable flatlining in poverty rates with 22% of the UK population currently in relative poverty and this has barely changed since the last global economic crisis. This is in spite of significant transformations in the world of paid work that have undermined pay and prospects alongside ‘the most far-reaching programme of change that the welfare system has witnessed in generations’. The regressive distributional effects of this are well-rehearsed. Welfare reforms have reduced the coverage and sufficiency of the working-age benefits system, with many falling through the social safety net. In response, commentators have long forecast that ‘next year’ we will see these changes reflected in official poverty statistics. And yet, this never comes.

There are a number of reasons for this but what if one the primary explanations is that many of those worst affected by welfare reforms were already close to or below the poverty line before these changes came into effect?

New research suggests this may well be the case and that the very poorest have seen their average incomes fall further away from the poverty line. Since 2007/08, those in ‘deep poverty’ (i.e. bottom 10% of the income distribution) have experienced a substantive reduction in average incomes, whilst those closer to the poverty line have experienced modest increases. These trends are particularly pronounced from 2011/12 with the very poorest witnessing a 15% reduction in average incomes since then. 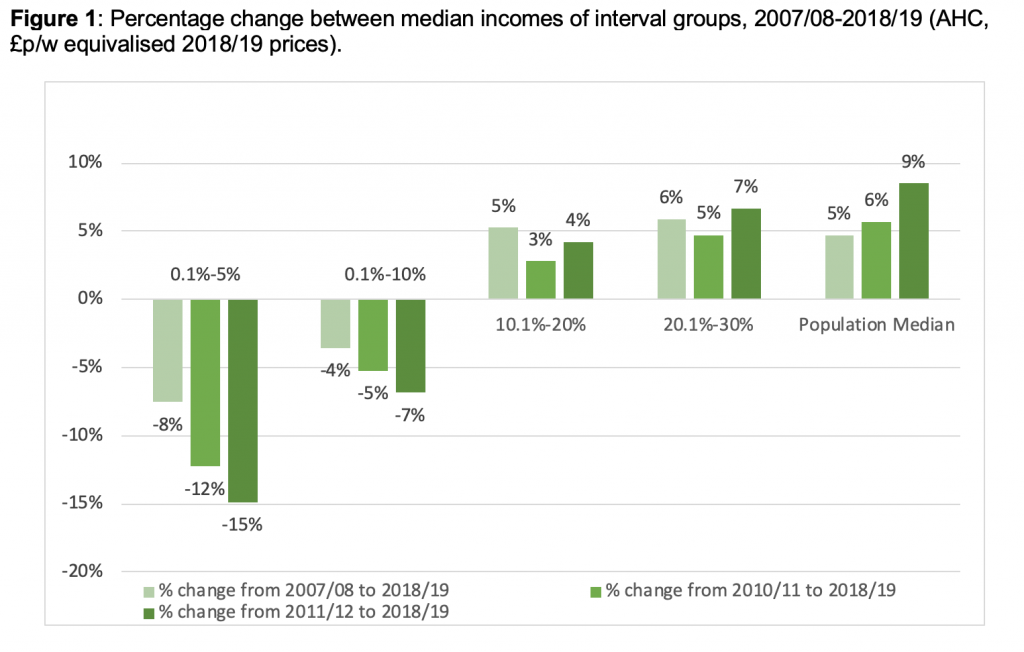 This splintering in the economic fortunes of those below the poverty line demonstrates how an increasing depth of UK poverty is currently being glossed over by official poverty measures.

Another key limitation of dominant approaches to poverty measurement is that they tend to neglect the changing socio-demographic composition of (deep) poverty. This means the highly gendered and racialised underpinnings to austerity, economic inequality and social change are often overlooked in mainstream analysis. Looking at how degrees of poverty intersect with markers of social difference, reveals that the likelihood of falling into deep poverty has increased for women, children, Black people, larger families, and those in full-time work since 2010.

Let’s consider the case of poverty, ‘race’ and ethnicity first. Albeit from a very high place, the proportion of Black and minority ethnic people in relative poverty has fallen since 2010. However, disaggregating trends to better understand compositional shifts reveals this ‘progress’ to be partial and selective. The proportion of Black people in relative poverty has grown and the proportion in deep poverty has increased by 11% since 2010. This highlights a need to better understand how social difference is articulated across the entirety of the low-income distribution, not just on either side of a given threshold. Within the context of COVID-19 and the disproportionate impact it has had on many minority ethnic communities, the importance of doing so has never been more keenly felt. 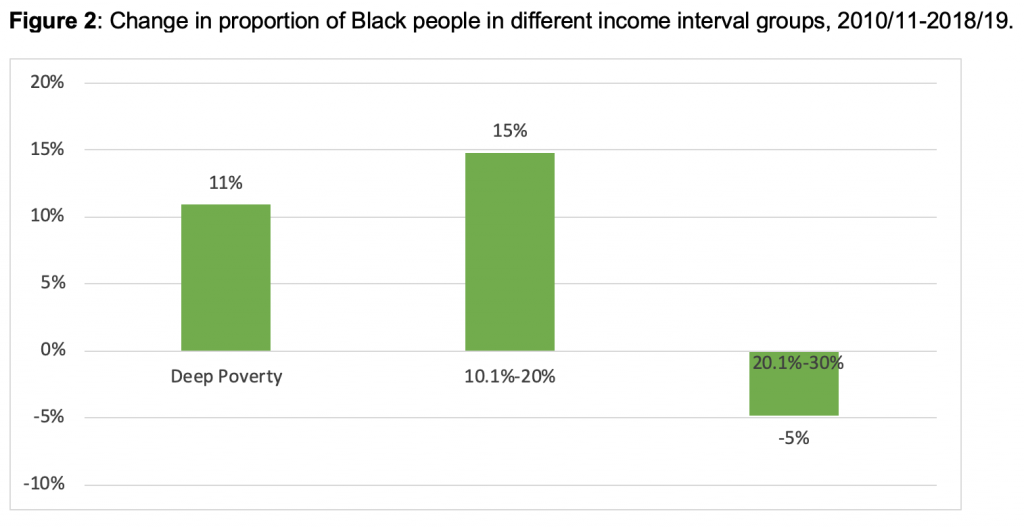 To take another example, we can see that the proportion of children in deep poverty has increased by 11% since 2010. Larger families are particularly at risk with the proportion of households with 2+ children and 3+ children in deep poverty increasing by 15% and by 21% respectively. The scale of this change is considerable but perhaps not surprising. Substantial cuts have been made to child benefit, a two-child limit and benefit cap have been introduced and a four-year freeze to working-age benefits has made it harder for families with children to cover their basic needs with the dwindling value of benefits. 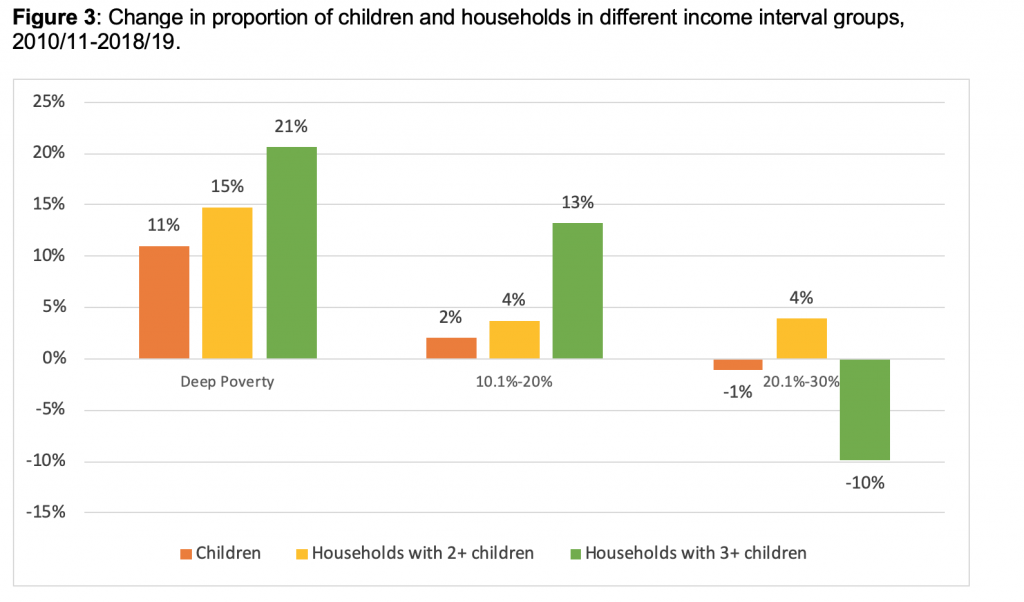 So what does all this tell us? Dominant poverty measures are not currently fit for purpose in terms of being able to evidence the full distributional effects of labour market change and social security reform in the UK. This is particularly the case in an era of potentially stagnant or falling average incomes. If the methods we choose to measure poverty determine how we come to understand it, then our current approach is woefully inadequate and stands to mislead the general public on the realities, causes, and solutions to poverty.

Recently it was announced that the UK has fallen into the deepest recession on record. Evidence suggests women, younger people, families and Black and minority ethnic communities stand to be some of the worst affected by the socio-economic fall-out from COVID-19. In the years to come, it will be necessary to hold the government to account in ensuring people aren’t swept further into deep poverty. But this will only be possible if it is evidenced.

The Office for Statistics Regulation has recently announced it will undertake a systemic review on the coherence of poverty statistics in the Autumn. The scope and nature of this remains to be seen but whatever shape it takes, it is long overdue. We need an honest conversation about what official poverty statistics can actually tell us about the living standards of those struggling on a low income. We can learn lessons from the last global economic crisis and do better when it comes to evidencing the effects of COVID-19 and changes to the benefits system in what will be very difficult years to come.

Daniel Edmiston (@daniel_edmiston) is Lecturer in Sociology and Social Policy at the University of Leeds. He is currently co-investigator on Welfare at a (Social) Distance (@DistantWelfare) – a major national research project investigating the benefits system during the coronavirus crisis, funded by the Economic and Social Research Council.

Non-EU migrants compete mostly with each other for housing; their impact on house prices is minimal.