Internet use and information technology seems ubiquitous throughout our society – for many, life would be unimaginable without it. But, as Ellen Helsper argues, there is a vast ‘digital underclass’ in the UK that has not benefitted from increasing rates of Internet access. New, targeted policies are needed to ensure access to digital technologies and their attendant benefits amongst the most disadvantaged groups.

A digital underclass is emerging in Britain, a group of people who are increasingly more disadvantaged in their ability to use the internet and other Information and Communication Technologies. As the government plans to make public services ‘digital by default’ these individuals will be unable to access them, not because of a lack of infrastructure but because of a lack of (effective) take up of the available connections.

Simpler solutions like improving infrastructure are unlikely to get this entrenched group of disengaged citizens online now or in the future. To avoid further entrenchment, concrete policy targets will have to be developed that focus not only on access but also on digital literacy, motivation and awareness as well as on broad engagement with the variety of opportunities available online.

Those who need access to services most are the least likely to take these up even when access is available. Therefore, a digital strategy that does not link to other social and economic policies is likely to fail. A joint effort between government, industry and the third sector is required to tackle the ever more complex problem of digital exclusion and to guarantee a competitive Digital Britain in the future.

The importance of digital inclusion

Information and Communication Technologies (ICTs), such as the Internet, provide access to a range of opportunities: information, education, communication, services, savings, jobs to name just a few. Increasingly, governments and commercial organisations are moving their services online. This means that those who do not have access to or are not able to use these technologies effectively are at a disadvantage compared to those who are more digitally included. In so-called information societies, digital literacy is just as important as traditional literacy to establish economic and social well-being.

Internet use continues to increase steadily in the UK. Recent figures indicate that in 2011 between 74 per cent (Ofcom) and 83 per cent (ONS) of the population has used the Internet. People connect at ever increasing speeds, broadband is the norm and dial-up the almost non-existent exception. This increase in uptake has led to some optimism amongst those who were concerned about digital exclusion.

This optimism may be partly behind the recent shift in UK digital policies – away from active intervention to improve use towards emphasising the rollout of superfast broadband. Underlying this is the assumption that high quality access will be taken up by everyone and that it will be used equally by all. This policy dossier shows that this policy shift in the UK is not mirrored in EU policy which is strengthening its focus on improving opportunities for use as well as access.

The question is if this British optimism is justified. There is statistical evidence that can help answer the two most pressing related queries:

Our recent policy brief suggests that the answer to both questions is ‘No’.

Getting the last few online

To answer the question about how easy it will be to get the people who are disengaged online it is important to understand how use of ICTs has developed over time in different groups. 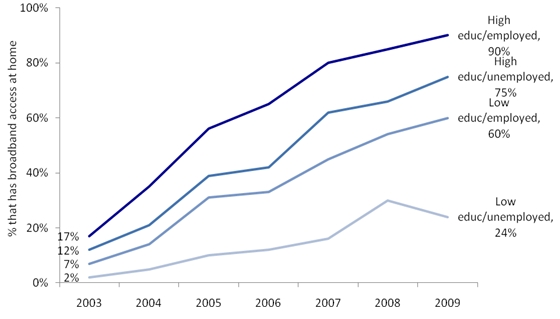 Figure 1 shows that, relative to other groups, people without employment and education are worse off now in connecting to the Internet than 6 years ago.  While all groups have a strongly increased take-up of broadband, take-up has been much slower in the lower educated unemployed group.

In a best case scenario it would take this group of unemployed lower educated people 20 years to catch up with those who are employed and have higher (university) education. However, this prediction is only sustainable if there is no levelling off of uptake in this group, which is unlikely since this has not been the case for other groups and media. In addition, for this prediction to be valid the technology to access the Internet would have to be the same in 20 years’ time. This even less likely since important elements like download speeds are 78 times faster now than they were 10 years ago.

Helen Milner (UK Online Centres) explains very lucidly in her blog that getting disadvantaged people online is not just an issue of availability of infrastructure, but ensuring take-up as well. Based on this and other data it is clear that rolling out superfast broadband by itself is not going to make the digital underclass disappear.

If the data suggest that infrastructure is not the (only) problem, what else might be limiting uptake of services?  Research shows that two other factors are very important for (effective) use of ICTs, confidence in the skills to use the technology and positive attitudes towards what these can offer. 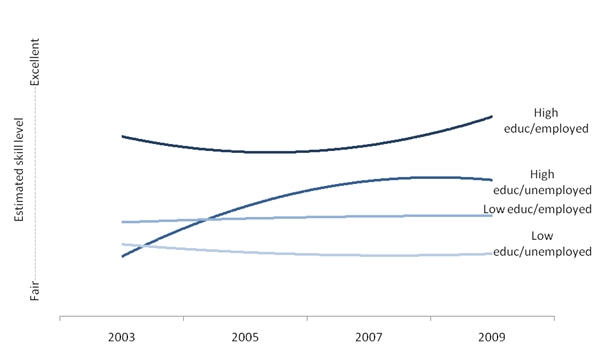 Figure 2 shows that, as was the case for access, amongst unemployed and lower educated Internet users there is very little improvement in Internet skills while amongst those with higher education confidence has increased exponentially in the last 6 years.

The unavoidable conclusion is that digital exclusion of the most disadvantaged has become entrenched, partly due to a lack of confidence, which continues to hinder them even when they have managed to secure access and go online. That is, the relative differences between those with higher education and employment and those with lower education and no employment have become larger over time.

Of course there can be no digital inclusion without access and proper infrastructure. Most people in Britain have access somewhere, but the quality of the connection and, most importantly the quality of engagement are of continuing concern. Therefore a policy that sets concrete targets for the roll out of high quality infrastructure across the country – instead of the rather vague ambition of “the best broadband network in Europe” (according to Culture Secretary Jeremy Hunt) – should be priority number one if Britain wants to keep up with other advanced information societies.

However, existing super-fast broadband and eAccessibility initiatives might actually lead to the persistence of a digital underclass in Britain unless they are specifically aimed at narrowing the skills and engagement gap. The well-off have been able to take advantage of the better connections and the digitally excluded have become worse off, relatively speaking. The voluntary and commercial sectors will not be able to narrow this gap on their own without government support because the last 20 per cent of disconnected people are likely to be much harder to get online because they suffer from various types of disadvantage.

To achieve a digitally equal Britain as well as a digital Britain, policies need to set targets for the whole spectrum of digital inclusion: quality of access, skills, motivations and effective, sustainable use. It is irresponsible to think that the latter can be handed over to industry or the third sector completely. Just as standards are set for education standards need to be set for digital inclusion across government departments and policies.

Since digital exclusion is so strongly linked to other types of disadvantage, digital inclusion policy needs to be integrated into broader social and economic policies that aim to improve the quality of life and service provision to the most disadvantaged in society. Without clear and specific targets for different groups and social problems the improvement in uptake of ICTs is likely to be marginal and to take place only amongst those who are already ahead in taking up the opportunities that ICTs offer.

You can read the full brief, The Emergence of a Digital Underclass: Digital Policies in the UK and Evidence for Inclusion on Scribd. More details are also available on the LSE Media Policy Project Blog.

An independent assessment of the coalition’s record on schools