Hiring more public sector employees is often part of left-wing parties’ electoral pledges, but do they fulfil it? Based on data from 22 OECD countries, Lasse Aaskoven finds that they generally do not, with some exceptions.

The promise to hire more public sector employees often features prominently in left-wing parties’ electoral campaigns. The UK Labour Party has repeatedly called for such increases, president Francois Holland famously promised to hire 60,000 more teachers in the 2012 French presidential campaign, while one of the Danish Social Democrats’ central campaign promises in the 2019 parliamentary elections was to hire an additional 1,000 nurses.

The analysis uses regression analysis but the raw data presented in figure 1 gives an idea of the potential differences between public employment levels under left-wing vs. non-left governments. There seems to be a slight difference amounting to less than one percentage point.

However, with regression analysis that takes into account the specific features of each of the countries – given left-wing parties might be more dominant in some countries than others – there seems to be no statistically significant difference between left-wing and non-left governments. 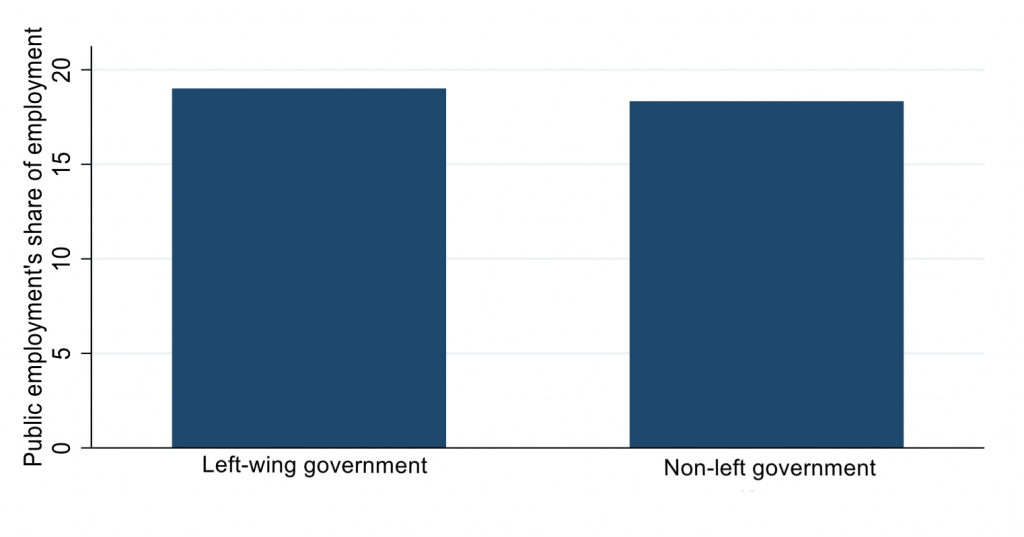 My interpretation of these results is that since public employees in most developed democracies tend to vote for left-of-center parties, especially within the public service sector, left-wing parties have an electoral incentive to increase the share of one of their core voter groups. At the same time, since left-wing governments, as most governments, operate under budget constraints, they also need to effect such increases during opportune times, i.e. election years.The phenomenon could work the other way around too: incumbent right-wing and centrist governments might decrease the number of public employees during a year when an election is to be held and/or pursue policies which increase the overall level of private employment without increasing the level of public employment at the same pace.

This interacting effect of left-wing governments and election years only seems to hold for elections held in the year in which the government’s term formally expires, the so-called exogenous election years. This result again suggests that left-wing governments do indeed time increases during election years. Figure 2 shows the average level of public employment under left-wing and non-left governments in years where the government’s term formally expires. This clearly shows a much larger average difference in the level of public employment than the average difference in Figure 1, a result which is also found when using regression analysis. 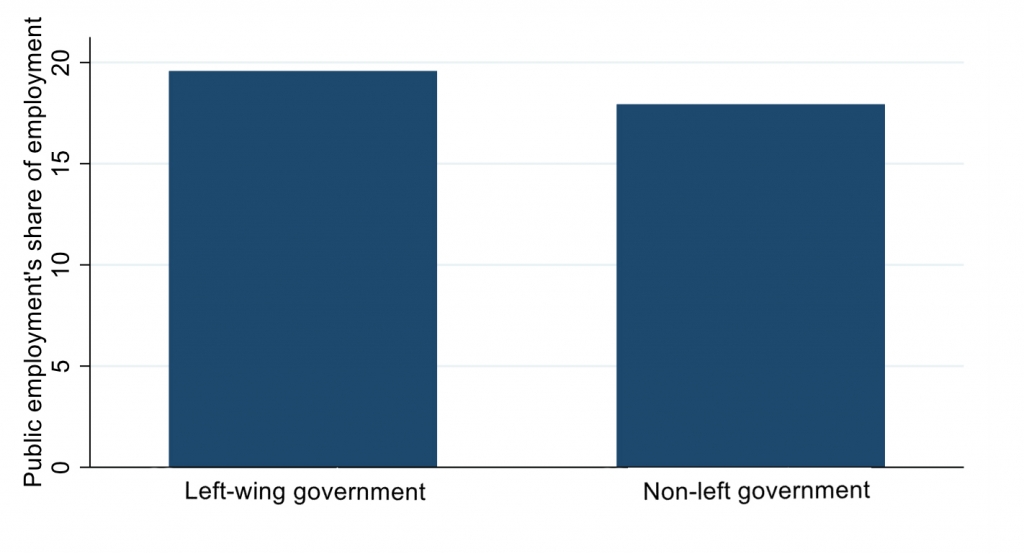 These results suggest that left-wing parties, at least in recent years, might indeed sometimes work towards increasing public employment levels when in power but that their motivations to do so may be more related to an incentive to win elections rather than a purely ideological preference for higher levels of public employment. More broadly, the results suggest that government partisanship might indeed matter for public policy. However, government ideology seems to not always be enough to produce a policy shift: partisan governments also have to face electoral incentives to comply with their expected ideological inclinations, a phenomenon also found in other policy areas.

Lasse Aaskoven is Assistant Professor in the Department of Government at the University of Essex.

The perils of electoral success