Does UK public policy respond to changes in public preferences? If so, is this the result of the government adjusting its agenda, or of unpopular governments being voted out and replaced by those more in line with public opinion? New research by John Bartle, Sebastian Dellepiane-Avellaneda, and Anthony McGann finds that voters’ signals broadly work to guide parties to deliver what the electorate want, but with a risk of over-correction and some ‘fuzzing’ due to ‘valence’ issues.

Do elections and public opinion make a difference? In a democracy, government policy should depend on what the public wants, at least in broad terms. For example, if the people want better public service rather than lower taxes, then that’s what the government should give them. We chart the relationship between public opinion and the level of government spending and taxes between 1945 and 2015. When the public mood moves to the left, do taxes and spending increase, and vice versa?

We find that the answer to this question is yes, eventually. If the people want (say) lower taxes or more NHS spending, sooner or later they will elect a government that gives them that. However, policy may be out of line with what the public wants for considerable periods of time. If the public thinks the opposition is incompetent, they may repeatedly re-elect the government, even though it keeps moving policy in the opposite direction to what the public wants. As a result, public spending goes up and down in long-run cycles, as each government over-corrects for their predecessor’s policies. 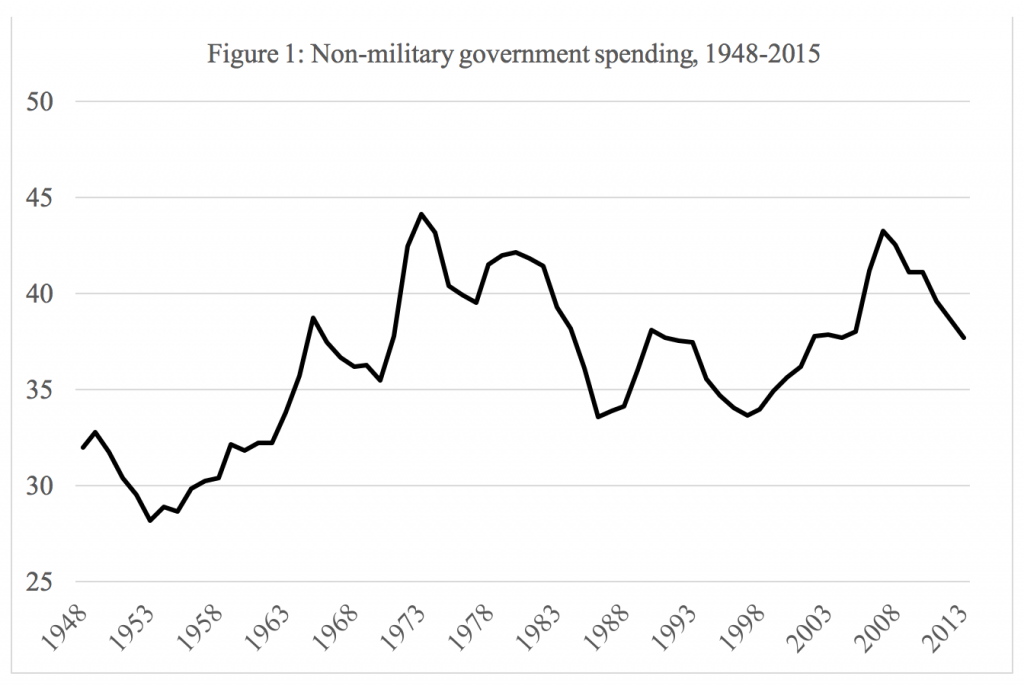 Note: Figure 1 shows the proportion (%) of the UK’s GDP devoted to non-military public spending, per year.

We can explain these patterns of government spending and taxation in terms of public opinion. To do this we have to measure the public’s ‘policy mood’. Fortunately, there are hundreds of survey questions that have been asked over the years that can be used to measure how left- or right-wing the public mood is. People have been surveyed about whether they want more public services (even if it means higher taxes), whether they want more spending on particular programmes, whether they want more redistributive taxes, and many other things. The problem is that the same questions are not asked every year. We use a statistical method developed by James Stimson to take all of these questions and produce a single measure of how “left-wing” the British public is in any given year. 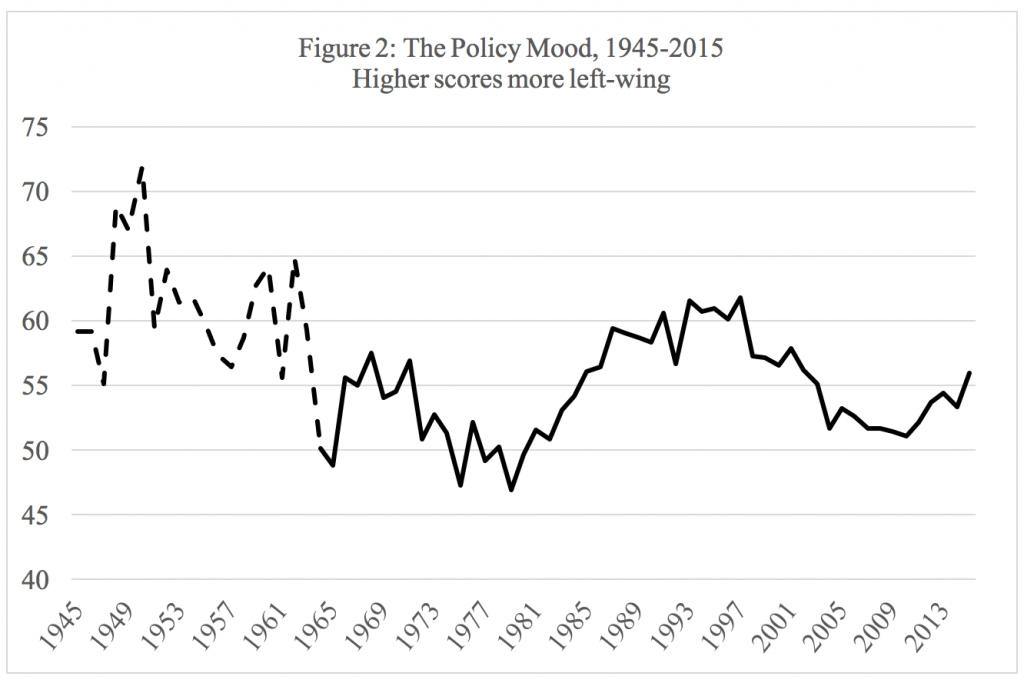 Note: Figure 2 shows an index of the UK’s ‘overall policy mood’ whose construction is explained above. The higher the score number here the more overall ‘left wing’ UK voters are in their responses to multiple poll questions. Note that the zero is suppressed here.

When we look at the policy mood, we see that there are long-run swings to the left and right. Public opinion moved sharply to the right during the economic crisis of the 1970s. However, it moved steadily back to the left under Margaret Thatcher and John Major (contrary to the widespread perception that the electorate became “Thatcherite”), before returning to the centre/right under Blair. Currently the public’s policy mood is moving back to the left.

We find that public mood reacts strongly to the level of government spending. When taxes are high, public mood moves to the right, as people demand lower taxes. However, when taxes and spending are too low, people become dissatisfied with the level of public services and move to the left. Thus the policy mood works a bit like a thermostat, as Wlezien has proposed.

We find that which party is in government matters. Labour governments do indeed increase public spending and taxes, while Conservative governments reduce them. (The only exception to this was the Heath government 1970-4.) 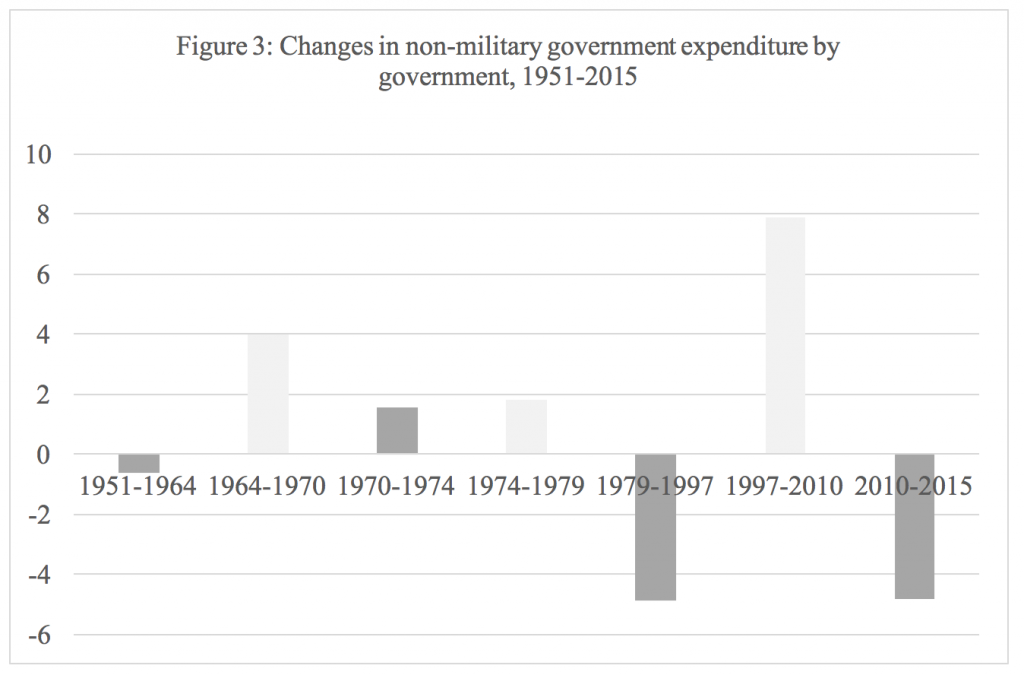 Note: Figure 3 shows changes in the proportion (%) of the UK’s GDP devoted to non-military public spending, over multi-year government terms.

Parties deliver the policies we would expect, which means that the public should be able to get what it wants by replacing the government. This, however, is the weak link in the chain of accountability. We find that when the government policy is out of line with public opinion, people are indeed less likely to vote for the government. However, this effect is quite weak, and easily outweighed by perceptions of party competence. If the public thinks the opposition is incompetent, they are stuck with the government. They have little choice but to re-elect it, even though it may be doing the opposite of what they want.

This sets up the cycles of over-correction that we see. Suppose that successive Labour governments raise taxes and spending to a very high level. As a result, public opinion moves to the right, as people object to the high taxes. Eventually, this leads to a Conservative government being elected. This government cuts taxes and spending, which causes public opinion to move back to the centre, and eventually the left. However, because Labour now has a reputation for economic incompetence, the Conservative government is repeatedly re-elected. It continues to cut tax and spending somewhat, even though the public no longer wants any more cuts. This leads to public mood moving even further to the left, as public spending falls far below what the public actually wants. As a result, Labour eventually wins back power, the Conservatives are now discredited for several elections, and the cycle start over again.

This, of course, assumes that politics is primarily about traditional economic issues, such as tax, spending and redistribution. This is a reasonable assumption in the UK for most of the post-war period. However, it is clear that in the 2017 general election that the issue of Brexit was important across the country. In Scotland, things were even more complex, with Scottish independence as the most important issue.

Nevertheless, the traditional view of elections as providing a clear choice between competing ideological visions of society – vote Labour for more spending and redistribution, vote Conservative for lower taxes and less state – is still very relevant. Many political scientists have argued that so-called “valence” issues, such as competence and leadership, are more important in modern elections than ideology and policy positions. There is some truth to this. In the short-term, we agree that valence issues (such as the parties’ economic competence) often determine election results. However, in the long run, the significance of elections is still that they determine the broad direction of government policy.

Note: the above draws the authors’ published work in the Journal of Public Policy.

John Bartle is a Professor of Government at the University of Essex.

Sebastian Dellepiane-Avellaneda is Senior Lecturer at the University of Strathclyde.

Anthony McGann is Professor of Government and Public Policy at the University of Strathclyde. He is author of The Logic of Democracy (University of Michigan Press 2006) and Gerrymandering in America (Cambridge University Press 2016).