Does protest work? And is it more effective when it takes places in countries ruled by repressive regimes or those with democratically elected governments? Steve Crawshaw writes that if we think nothing will change, as people often do in democracies, that lack of belief becomes self-fulfilling.

For much of my life – first as a journalist, and then as a human rights advocate – I have reported on authoritarian regimes and on the often mysterious chemistry of how and when they come and go. I have been fascinated and inspired by change achieved against unthinkable odds – all-powerful rulers overthrown, including through the sometimes startling power of peaceful protest.

If so much can be achieved with authoritarian regimes, it would seem that protests in a democratic context should be more effective still. In reality, sometimes the opposite is true. A repressive framework, with nothing but force to support it, sometimes provides its own kind of instability, hidden in plain sight. Thus, in October 1989, the East German authorities announced a plan to crush peaceful protests in Leipzig, “if need be, with weapons in our hands”. They thought that the pre-announced plans for a massacre meant people would stay at home. But so many people came out that night that the authorities retreated. A month later, as a direct result of that retreat, the Berlin Wall was down.

Every unelected dictator suffers, logically enough, from paranoia. You may have all the guns and tanks – but you can still be frightened of what Vaclav Havel, Czech dissident-turned-president, called “the power of the powerless”. In Prague, the repressive apparatus collapsed in barely a week when a quarter of a million went daily on to Wenceslas Square, jangling keys and little bells to tell the rulers: your time is over.

In 2011, President Hosni Mubarak was forced to step down when millions of Egyptians demonstrated the power of the powerless, with protests which were peaceful on the protesters’ side, and marked by great violence on the part of the authorities. (The situation in Egypt today is unremittingly bleak; but that takes nothing away from the remarkable achievements of that time.) 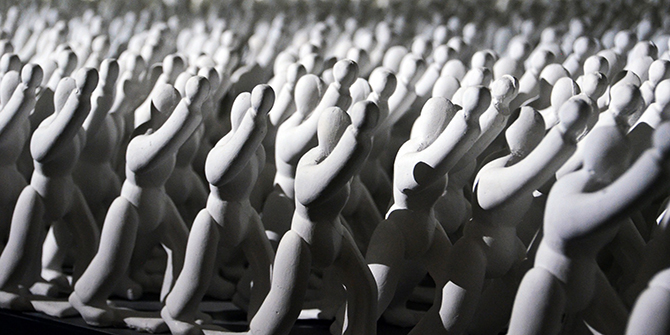 If it is possible for peaceful crowds to force the collapse of the Berlin Wall or to unseat a Mubarak, how easy it should it be for protesters to persuade a democratically elected leader to retreat from “mere” bad policy? In truth, not easy at all. Two million marched in the UK against the Iraq War in 2003 – and it made not a blind bit of difference with Tony Blair’s determination to proceed with a war that the UN Secretary-General described as illegal. Blair was re-elected, two years later.

After the inauguration of Donald Trump in January 2017, millions took part in the series of Women’s Marches in the United States and around the world. It seemed – it was – a powerful defining moment. And yet, at least in the short-term, those remarkable protests were water off the presidential duck’s back. His response was mockery. In some respects, Trump could afford to mock. A man who has received 63 million votes is in a stronger position than the unelected leader who has to threaten or use violence to stay in power.

One thing that protest in an authoritarian and a democratic context have in common is that the impact of protest – including delayed impact – remains uncertain, both for those who protest and those who are protested against.

Vaclav Havel argued that it was worth “living in truth” – speaking truth to power – even without any certainty of outcome. “Those that say individuals are not capable of changing anything are only looking for excuses.” In that context, what is perhaps most unacceptable is to mock those who take risks, and seek change. Lord Charles Powell, former adviser to Margaret Thatcher, for example explained to the umbrella protesters in Hong Kong in 2013 that they were foolish and naive. They should, he told them, learn to live with the “small black cloud” of anti-democratic pressures from Beijing. The protesters failed to heed Powell’s complacent message. In the words of Joshua Wong, on his way back to jail earlier in 2017: “You can lock up our bodies, but not our minds.”

Scepticism and failure are linked, as the Egyptian activist Asmaa Mahfouz made clear in a powerful video which helped trigger the uprising in 2011. The 26-year-old declared: ‘”Whoever says it is not worth it because there will only be a handful or people, I want to tell him, “You are the reason for this.” Sitting at home and just watching us on the news or Facebook leads to our humiliation.’ The video went viral. Millions went out. The rest was history.

Even in a democracy, that same it-can’t-be-done logic sucks us in more often, perhaps, than we realize.

Ahead of 2017’s UK elections, I was happy to tell whoever would listen that the support of many young people for Jeremy Corbyn was well-meaning but essentially naïve. Too few would support him nationwide. The scale of the Tory victory would be overwhelming. In short: this was an electoral road to nowhere. My analysis (and the identical analysis of others, with much more authority to speak on British politics than I) proved, of course, as accurate as a Trump tweet. So many were so hungry for change that the country’s political landscape changed overnight.

In short: voting did what it was supposed to do, in allowing protest to be heard. In this context, the common thread between a surprise election (almost-)defeat for the government and the defeat of an unwanted, unelected regime was above all about belief.

From the United States to Hungary, from Poland to the Philippines, where illiberal leaders seem so secure in their hold on power, Havel’s urging of the need to “live in truth” remains as relevant today as it was in the darkest days of the past. In a totalitarian context, you need to gain belief to find the courage to go out on the street, despite all the obvious risks.

Note: Steve spoke at an LSE even in October 2017, as part of the Ralph Miliband programme. A podcast of the event is available here.

Steve Crawshaw is an advocacy adviser at Amnesty International, and author of Street Spirit: The Power of Protest and Mischief, foreword by Ai Weiwei.