As the people of Scotland consider their vote in next year’s referendum, what evidence is there that the nation can succeed ‘on its own’? Gill Wyness, Stephen Machin and Sandra McNally explore how Scotland compares with the rest of the UK in education, an area of public policy that is already highly devolved.

When considering whether or not Scotland should gain independence from the UK, voters may wish to think about how their nation has fared in areas of public policy that are already highly devolved. One such area is education, where there are several key differences between the Scottish system and what is in place in the rest of the UK: Scotland’s secondary school curriculum is non-statutory; its qualification system of Scottish Standard Grades and Highers is quite different to the system of GCSEs and A-levels in the rest of the UK; and while the power of local authorities is diminishing in England, Scotland’s local authorities continue to play a powerful management role.

Given these differences, examining the performance of young people educated in the devolved Scottish system in comparison with those educated in England, Wales and Northern Ireland has the potential to offer valuable insights into the impact of Scottish devolution and the potential impact of full independence.

Our research tracks educational achievement at several key stages of compulsory and non-compulsory education in Scotland, England, Wales and Northern Ireland over the past 20 years. We examine data on widely used educational performance measures reported in government statistics – for example, the proportion of pupils achieving five good GCSEs in England and the proportion of pupils achieving five awards at level 4 of the Scottish Credit and Qualifications Framework (SCQF).

Our analysis shows that Scotland’s performance has been static over time while performance in the rest of the UK has been increasing. Nevertheless, Scotland performs well relative to the rest of the UK at age 16 (see Table 1 and Figure 1). While this suggests that Scottish children are reaching school leaving age with a good grounding in English and maths, it is important to know what happens next. 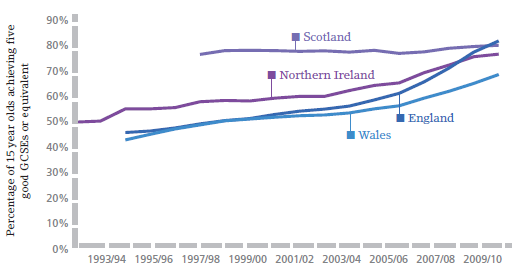 This may be a result of the more modular system of Scottish Highers, which can be completed in one year, in contrast with A-levels, which must be studied over two years, essentially requiring pupils to stay in school for another year. This could be evidence that the system of one-year Highers is a disincentive to stay on for another year and acquire the necessary qualifications for university. Again, however, it is difficult to compare such different systems. For example, a higher proportion of students in Scotland study for higher education degrees in colleges of further education rather than in universities; this distorts comparisons based on university participation alone.

Because of the problems associated with comparing educational attainment across countries with different systems, we also look at three international surveys in which all the UK nations participate: the Programme for International Student Assessment (PISA), a study of the reading, science and maths abilities of 15 year olds; the Progress in International Reading Literacy Study (PIRLS), which assesses reading comprehension at age 10; and the Trends in International Mathematics and Science Study (TIMSS), which surveys achievement at ages 10 and 14.

The advantage of these surveys is that pupils are tested in the same way at the same age. Our analysis of international test scores shows Scotland in a favourable light internationally. While there are some inconsistencies in findings depending onthe survey, the results tend to show Scottish pupils performing as well if not slightly better than pupils in the rest of the UK (see Table 2).

Notes: Figures are standardised so that the mean for all participating countries is 500

Indeed, we find more similarities than differences across the UK, with all four nations attaining similar positions relative to the international community. This is perhaps unsurprising, given the history of education in the UK, as well as the cultural similarities and shared labour markets. It suggests that these factors may be more important for educational outcomes than the types of institutional arrangements that countries adopt or their policies on school autonomy, centralisation and pupil testing.

The results also suggest that continued devolution – at least in education and conditional on funding – should not result in a change in outcomes in Scotland  relative to the rest of the UK. That said, we find little evidence in either the national assessments or the international comparisons of any improvements in Scotland over the time periods we have studied (1995-2007 in the TIMSS study, 2000-09 in the PISA study and since 2004 in national statistics).

Furthermore, our findings show deep levels of inequality in Scotland, particularly between pupils from different socioeconomic groups. For example, the PISA data for maths in Scotland in 2009 show that the difference between the most advantaged quarter of young people and the least advantaged quarter is 93 points. The top quarter achieved 549 points, which is on a par with the average score in Hong Kong (which was placed third in the OECD for maths that year), while the bottom quarter achieved only 456 points, on a par with Turkey (which was placed 44th).

Educational inequality is a huge problem that devolution has been unable to solve. But while this may be cause for alarm, it is a problem that is shared by all four nations of the UK, with Scotland faring no worse in these terms than England. Furthermore, while Scotland is in charge of its education system, it is unable to raise taxes or alter many other aspects of fiscal policy, which somewhat limits the level and distribution of spending on education. Perhaps with independence Scotland would be better able to tackle the inequalities in its education system. 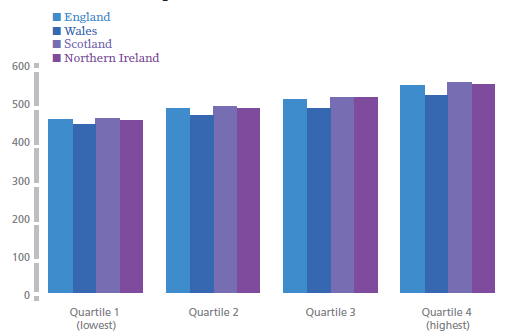 Notes: PISA data for 2009; performance within each quartile of socio-economic status.

This article summarises ‘Education in a Devolved Scotland: A Quantitative Analysis’, a report to the Economic and Social Research Council by Stephen Machin, Sandra McNally and Gill Wyness, CEP Special Paper No. 30.

Stephen Machin is a professor of economics at University College London and CEP’s research director.

Sandra McNally is director of CEP’s research programme on education and skills and professor of economics at the University of Surrey.

Gill Wyness is a research officer in CEP’s education and skills programme.

The lobbying bill smoke-screen and tax-rises for top income earners: Top 5 blogs you might have missed this week