David Cameron and the Conservatives have made a number of spending pledges, most notably proposing to reduce income taxes in the next parliament. In this article, Vincenzo Bove and Georgios Efthyvoulou present research on ‘political budget cycles’ and the tendency of incumbents to engage in budget manipulations at election times.

In the last few months, in a bid to persuade voters in next year’s general election, Prime Minister David Cameron has announced a number of bold measures. In particular, he pledged to raise the personal income tax threshold to £12,500, thus giving a tax cut to approximately 30 million people; lift the 40 per cent tax band to £50,000; protect the NHS from cuts and introduce a new seven-day GP access by 2020; retain thousands more teachers in science and mathematics; and invest more than £1 billion in the capabilities of the Armed Forces.

To many political observers, protecting education, health and defense from cuts in an age of austerity is a political impossibility. Yet, the political economy literature suggests that we might expect some of these promises to be partially delivered around the election year, together with the manipulation of other categories of government spending, even when not explicitly mentioned by Cameron. Specifically, according to the research on ‘political budget cycles’, incumbents tend to engage in budget manipulations at election times to improve their chances of remaining in power. The simple argument is that voters like low taxes and high spending in certain public goods and prefer candidates whom they expect will deliver them greater material wellbeing in the post-electoral period.

The general consensus in the literature is that election-timing fiscal cycles occur in all modern democracies, even though their nature and magnitude can differ substantially across countries. For instance, Shi and Svensson and Brender and Drazen claim that significant electoral increases in the overall level of spending and deficits are more likely to emerge in developing countries or in “young democracies”, where voters have low access to free media or less familiarity with electoral politics. This view is consistent with arguments that voters in developed countries and established democracies (like the UK) not only are hard to ‘buy’ through governments’ opportunistic actions, but also they are averse to high levels of spending and deficits. As a result, electoral manipulation in these economies is more likely to take the form of changing the composition, rather than the level, of public spending (see research by Drazen and Eslava); for instance, governments shifting resources towards transfers and social security, and away from less visible and less politically-sensitive programmes, such as capital investments.

In a recent paper on this debate, joint with Antonio Navas, we focus on the tradeoff between social and military expenditure and present empirical evidence from 22 OECD countries. We find that governments tend to sacrifice military spending at election times as a way to enable increases in social spending (such as pensions, family and health programs), which have a more direct and more immediate political impact on voters. In addition, we find that the size of this tradeoff is smaller when we exclude countries involved in conflicts, where voters assign a relatively higher value to military spending due to security considerations.

In another paper, we use data from all EU member states and find that the degree to which governments engage in electoral budget manipulations is positively correlated with the uncertainty over the electoral outcome, as measured by opinion polls. Put simply, the tighter the electoral competition, the higher the marginal benefits of winning additional votes, and thus, the more willing the government is to induce electoral cycles and bear the related costs (like the cost of breaking EU fiscal rules and the possibility of reputation damage). This finding is in line with a case study by Kenneth Schultz which looks at UK transfer payments from 1961 to 1992 and shows that electoral cycles occurred only when and to the degree they were needed by the incumbent.

Looking at the composition and level of UK taxes over the past decades allows us to detect possible electoral patterns on the revenue side too (even though formal regression analysis is needed to draw statistically valid conclusions). Figure 1 displays the evolution of income tax, corporate tax and the tax on properties as well as goods and services (as a percentage of GDP) over the period 1980-2013. The dotted vertical lines correspond to election years, while the red and the blue bars indicate whether the prime minister was from Labour or the Conservative Party, respectively. 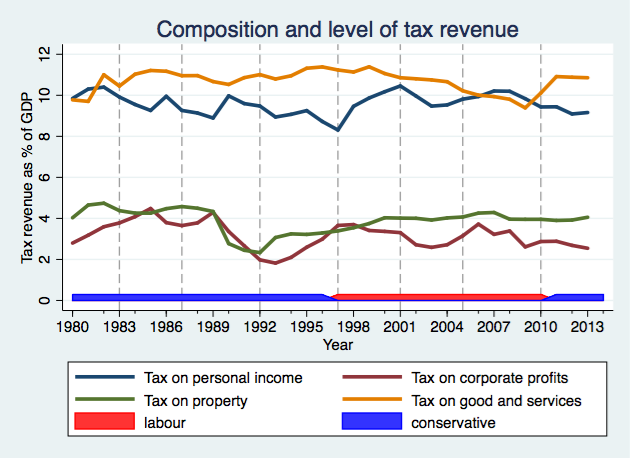 The periods around the general elections in 1987 and 1992 saw a reduction in the level of tax on corporate profits while in 1992 there was also a remarkable decrease in the level of tax on property. In both cases Margaret Thatcher was the incumbent PM and the difference in polls between the governing and the opposition party, in the quarter before the election, was less than 3 per cent. The election in 1997 was also interesting in this respect, as it witnessed a decrease in the taxation on personal income and an increase by almost the same amount in the level of taxes in corporate profits. That year marked the transition from a Conservative to a Labour government, and the level of taxation on personal income was promptly restored to previous levels.

To what extent is Cameron likely to deliver on his promises to decrease the taxation and increase certain categories of public spending? Although very difficult to say, the closeness of the Conservatives, Labour and other parties in the latest opinion polls (see Figure 2) suggests that the government will employ whatever means it has at its disposal to ensure a victory. And manipulating short-term fiscal policy instruments in the immediate period before the elections is definitely one way to solidify support within the electorate. 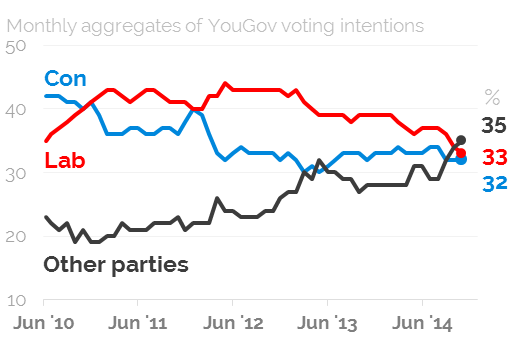 Note: This article gives the views of the authors, and not the position of the British Politics and Policy blog, nor of the London School of Economics. Please read our comments policy before posting. Featured image credit: Medill DC CC BY 2.0 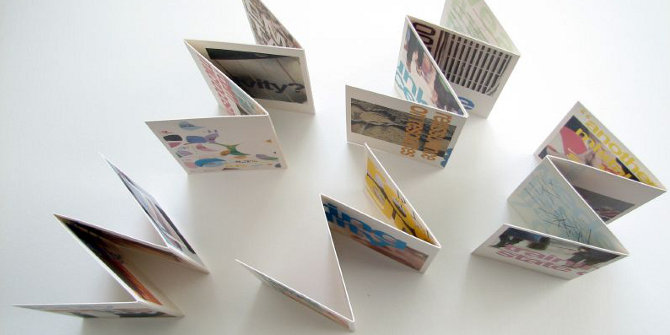