When people’s neighbourhoods or wider social contexts change in visible ways, as with increasing ethnic diversity, it can be disconcerting for established residents, and trigger perceptions of ‘threats’ that evoke ‘backlash’ political responses. Alternatively the diffusion of ethnic groups may increase knowledge and tolerance. Drawing on a meta-analysis of studies on the topic, Eric Kaufmann and Matthew Goodwin argue that ethnic diversity transitions may contribute to a populist right backlash. However, such effects may be temporary.

The ethnic make-up of many western countries is changing, and in countries previously seen as having ‘white’ majorities that past predominance is declining. In the United States, Canada and New Zealand, the ‘majority-minority’ point will arrive around 2050, while in western Europe it is projected to occur towards the end of the century. Some commentators have asked if this change may lead to a growing reaction or ‘white backlash’. All else being equal, we suggest that the answer may be yes.

Our recently published statistical meta-analysis of the quantitative literature on this question uncovered 171 academic papers, books or dissertations since 1995 containing some 4 million data points across various datasets and western countries. Studies were heavily slanted toward the present, with a median year of 2011. Using the effects of minority share (i.e. % immigrant, or % non-white) on immigration attitudes or populist right support as our measure of possible ‘threat perceptions’, we discovered such an effect was present in 71% of the 257 models where there was a significant statistical relationship. On the other hand, in 29% of cases, increased diversity was associated with greater tolerance of immigration amongst the ‘mainstream’ population.

When we include statistically insignificant results, as in Figure 1, only a third of all tests uncovered a significant ‘threat perception’ response. But this partially reflects data and model noise: papers with a longitudinal basis help screen this out. This set of studies shows a substantial ‘threat perception’ effect. In around 90% of models where ethnic diversity was measured over time, or where the authors tested for the effect of ethnic change (i.e. minority growth between 2000 and 2010), rising diversity predicted greater opposition to immigration or support for the populist right. And this was usually statistically significant.

Ethnic changes matter most for ‘threat’ perceptions, but levels of diversity (regardless of change) are also important. Critically, Figure 1 shows that the contrasting ‘threat perception’ and toleration effects of minority levels both vary by geographic scale. 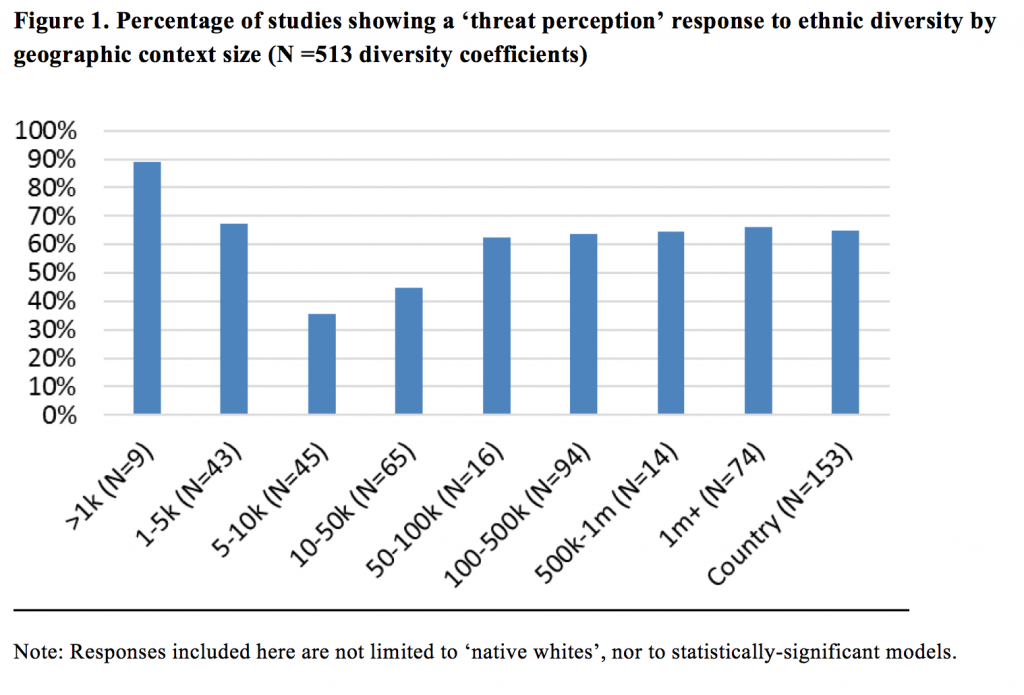 Figure 2 is limited to models which concentrate only on native-born white people and also report significant diversity effects. It shows a more pronounced version of the same pattern. In neighbourhoods (i.e. with populations of 5,000-10,000), 70% of significant tests found that a higher ethnic minority share of the population predicted lower native white opposition to immigration or right-wing populist support. However, in small units like residential blocks, or in large ones like counties, cities or countries, 80-100% of significant results reported that higher ethnic diversity was associated with greater apparent ‘threat’ perception. 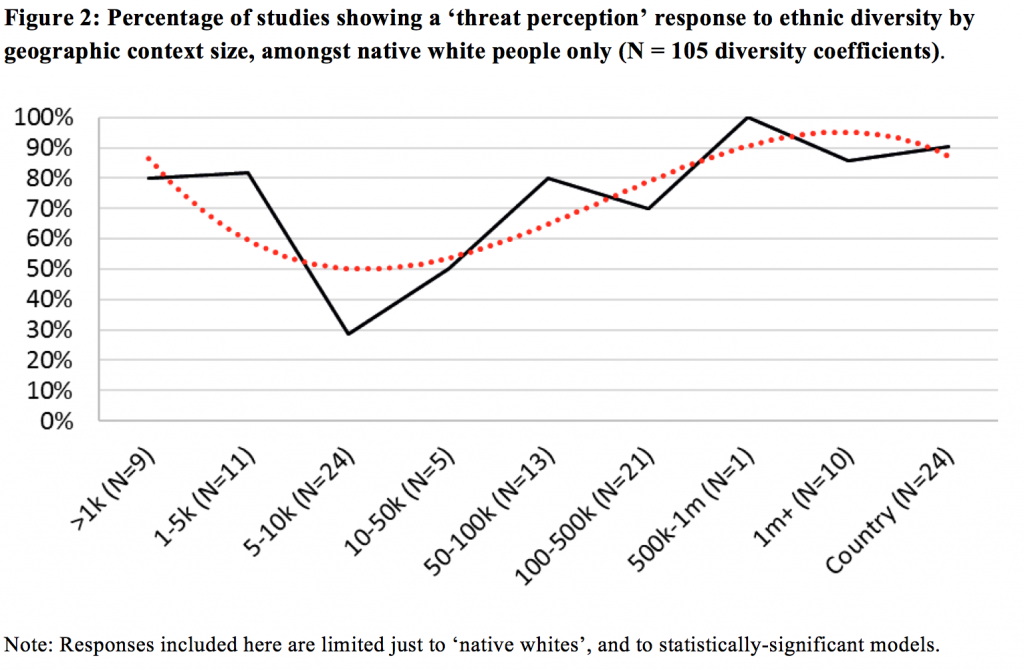 How should these patterns be explained? In other work, we find that neighbourhood ethnic diversity is associated with intimate inter-ethnic contact, which tends to reduce concerns over immigration. Yet in larger geographical settings, many white people inhabit relatively homogeneous neighbourhoods, often in the exurban ‘halo’ where support for the European populist right or Trump is elevated. Here face-to-face contact with people from minorities and with immigrants may be limited, yet in nearby areas ethnic diversity is clearly noticeable.

Marisa Abrajano and Zoltan Hajnal argue that economic and political contestation is more intense at the city, state or national level than it is at a really local level. We rarely think of our neighbour as a job competitor, for instance. In addition, we surmise that politically relevant identities tend to be stronger at national level: people are more willing to move neighbourhoods than countries. All of which renders people more sensitive to national ethnic diversity than to local diversity. Numerous surveys, in both Europe and the US, show that more people are concerned about immigration nationally than locally.

Curiously, the positive effects of contact with people of diverse ethnicities at neighbourhood level do not appear to apply in the most intimate settings like apartment blocks. Psychological discomfort may operate more strongly at this domestic scale. It is possible that white people living in more diverse blocks may show heightened ‘threat’ perceptions that override the positive effect of high neighbourhood contact. Moving across the full range of geographies in Figure 2, from blocks to countries, we find that the impact of diversity takes the form of a ‘diversity wave’. There appear to be higher ‘threat’ perceptions at block level, with such concerns then falling at the neighbourhood level, then rising again at the level of districts, counties or countries. More research is needed to confirm if this apparent finding about blocks levels is correct, and if so to ascertain precisely which mechanism is operating.

Stepping back from this picture, our results tally with social psychologist Karen Stenner’s work on authoritarianism and status quo conservatism. Status quo conservatives have no problem with diversity, but dislike change. Conservatives are attached to an established ethnic configuration in a territory. Ethnic change disturbs this communal and existential attachment.

Authoritarians, by contrast, care less about change than about order and unity. They dislike diversity and dissent. For authoritarians, diversity levels, more than changes, are the problem. Rising diversity brings both ethnic change and higher diversity levels, threatening both status quo conservatives and authoritarians. As research on European populist right parties suggests, the result is that rising ethnic diversity is likely to increase ambient backing for populists, even as support rises and falls with short-term fluctuations in migration like the 2015 European Migrant Crisis. While younger people benchmark against higher ethnic diversity levels, so long as change continues the same ‘threat’ perceptions may be likely to characterize their views as they age.

However, a key factor that may partially mitigate this is the gradual dispersion of minorities. After initially creating a bump of ‘threat’ perceptions (as with Hispanic dispersion in the USA during the 1990s and 2000s), the dispersion of ethnic minorities could spread the experience of local inter-ethnic contact to a wider segment of the population. We find that local ethnic changes from internal migration produce increased hostility to immigration, but that this effect fades after a decade if ethnic changes stop. The more established the local minority presence, the more diversity produces a local reduction in hostility.

Yet minorities often remain highly concentrated, so ‘threat’ perception effects may still predominate on the national stage. The impact of rising ethnic diversity on public opinion is not dramatic, but it can make a substantial difference over time. In a hypothetical example of a country whose minority population share rises one percentage point per year over two decades (faster even than contemporary Canada), we calculate this would increase opposition to immigration by about half the difference between the most anti-immigration nation (Greece) and the least anti-immigration nation (Sweden).

All told, the West could be in for a period of turbulence as it enters what some term its third demographic transition toward ‘majority-minority’ ethnic composition.

Eric Kaufmann is Professor of Politics at Birkbeck, University of London, and author of Whiteshift: Immigration, Populism and the Future of White Majorities (Penguin (UK), October 2018; Overlook (US), Jan 2019).

Matthew Goodwin is Professor of Politics at the University of Kent, and co-author with Roger Eatwell of National Populism: the Revolt Against Liberal Democracy (Penguin, October 2018).