UKIP has watched as its competitors on the mainstream and radical right have exited the electoral field. Robert Ford writes that previously Conservative-voting ‘strategic Eurosceptics’ along with the BNP’s ‘polite xenophobes’ have joined UKIP’s ranks giving Nigel Farage and his party an unprecedented political opportunity.

Radical right parties mobilise a complex mix of resentments, against immigration and multiculturalism, corrupt and self-serving elites, a liberal popular culture and the lax morals it tolerates, and the decline of national culture and national sovereignty.  A growing number of parties across Europe have mobilised this heady, emotive mix of identity, anxiety and intolerance to break through into national political representation, and even into government.Over the past decade, Europe has become more closely entwined with four of the central concerns of the radical right. Nationalist concerns about the loss of sovereignty to Europe have grown as evidence of the power of EU institutions, and popular rejection of that power, have accumulated. Authoritarian voters, concerned about maintaining law and order and protecting society from threats have seen British governments losing battles with European institutions, particularly the European Court of Human Rights, over issues such as votes for prisoners and deportation of criminals.

Voters anxious about immigration see Europe looming larger too. Since the accession of the poorer post-Communist “A8” countries in 2004, and the decision by the Blair government to accept unrestricted migration from these countries, central and Eastern Europe have become the principle source of unskilled labour migration to Britain. Populists mobilising hostility to immigration can say, with justification, that such migration can only be controlled by changing our relationship to Europe.

Europe has also emerged as a stronger theme in populist narratives railing against out of touch self-serving political elites. Populists can point to the frustration of public opinion in the repeated refusal of both Labour and the Conservatives to offer the public a referendum on Europe, or to seriously consider proposals for any fundamental reform of relationships with the European Union. They can also point to the prominence in EU politics of senior political figures from both governing parties as evidence of an elite clique maintaining self-serving links with the lucrative and powerful Brussels gravy train.

Europe also plays a second, subtler role for populist right wing politicians – it helps to legitimate them. Research suggests that many voters are internally conflicted about sensitive political issues, such as Islam, immigration and identity – they may have strong concerns about these issues, but reject organisations like the BNP and EDL due to their association with violence, racism or fascism. Voters such as this will reject parties, such as the British National Party, which are perceived purely as vehicles for mobilising intolerance. The most successful radical right politicians are often, paradoxically, those who start by talking about something else.

The contrasting treatment of BNP leader Nick Griffin and UKIP leader Nigel Farage over the past decade provides an example of this effect in action. Griffin’s efforts to appeal to a more mainstream audience were hamstrung by his party’s legacy of fascism and violence, which lead the media, other politicians, and the electorate to treat him as a pariah. Nigel Farage, by contrast, has been able to raise similar contentious questions about immigration, Islam and identity in mainstream political forums such as Question Time without being attacked as a racist or a fascist thanks to his roots in a more legitimate tradition of Eurosceptic politics.

My research with Matthew Goodwin and David Cutts suggests that UKIP have already been successful at mobilising beyond its core issue of Euroscepticism, developing an “uneasy coalition” of two distinct electorates. “Strategic Eurosceptics” are older alienated Conservatives supporting UKIP as a means to express dissatisfaction with the mainstream status quo over Europe. “Polite xenophobes” are more economically insecure, working class voters who hold strongly populist views on a range of issues – including hostility to immigrants, anxiety about Islam and disaffection with mainstream politics – and who regard UKIP as an outlet for these views.

As the chart below shows, the attitudes of UKIP voters in the 2009 European Parliament elections fell squarely between the Conservatives and the BNP on core radical right issues: xenophobic hostility to immigrants, populist hostility to elites and racial prejudice against minorities. UKIP’s “core” voters (UKIPc) – who expressed an intent to support the party in Westminster elections as well as Strasbourg elections – expressed populist views even more strongly that “strategic” voters (UKIPs) who said they would support the party in European elections. 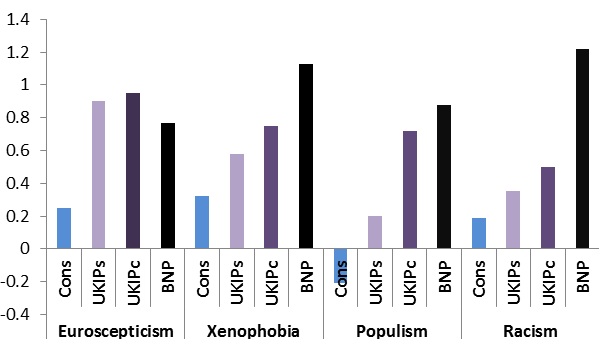 Recent political events have reduced the competition UKIP faces in building a “populist Eurosceptic” support base. The collapse of the BNP means UKIP now faces no competitor on the extreme right, leaving it free to recruit heavily from the 20 per cent of the electorate who hold radical right views on a broad range of issues. In recent local elections some of UKIP’s strongest performances have come in areas where the BNP has recently collapsed, suggesting it is already reaping these benefits. The constraints the Conservatives face in coalition also leaves UKIP with more freedom to recruit from the centre-right on Europe but also on radical right issues such as law and order or immigration, and populist resentment of an out of touch governing class of “posh boys”.

UKIP still faces formidable obstacles – such as balancing the demands of EU focussed activists and domestically focussed voters, and finding a way to break through the barriers presented by the first past the post electoral system used in local and Westminster elections. Despite this, Nigel Farage’s party has an unprecedented opportunity, for at the very moment when its core issue of Europe has become intertwined with broader radical right domestic concerns over identity, security, and immigration, UKIP’s main competitors on the mainstream and radical right have vacated the field.

Rob Ford is Hallsworth Research Fellow at the University of Manchester. He researches immigration, prejudice and the radical right, and is currently working with Matthew Goodwin (Nottingham) on a book about UKIP and the BNP. Much of his research can be found here and he tweets under the handle @robfordmancs