Why do some MPs invest more in constituency communication than others? Using data from the Communications Allowance between 2007 and 2010, Katrin Auel and Resul Umit identify key incentives that explain this puzzle.

Everyone agrees that parliamentarians should keep in touch with the people they represent: constituents demand more of their representatives’ attention, while parties encourage their members to reach out to the people in order to pass political messages. Yet in the UK, some MPs invest more in communication with their constituents than others. Is there a logical explanation for this puzzle? Which constituencies are more likely to hear from their MPs?

Our research addresses these questions by looking at MPs’ Communications Allowance, in place between 2007 and 2010. We find that rebellious MPs, senior MPs, and those who do not seek re-election communicate less with their constituents. In contrast, MPs in marginal seats, those who are more active in parliament, and those who represent urban constituencies communicate more. We see these results as evidence of MPs’ constituency communication depending on challenges to their re-election. Communication is an important tool for MPs to convince their electors of their trustworthiness, and the more that job is insecure, the more incentives they have to communicate.

Figure 1 shows on what MPs spent their allowance during the 2009—2010 parliamentary term, highlighting expenses such as publications and postage costs, advertising constituency surgeries, and maintaining websites.

Figure 1: Percentage of allowance spent on individual types of expenditure (2009–2010). 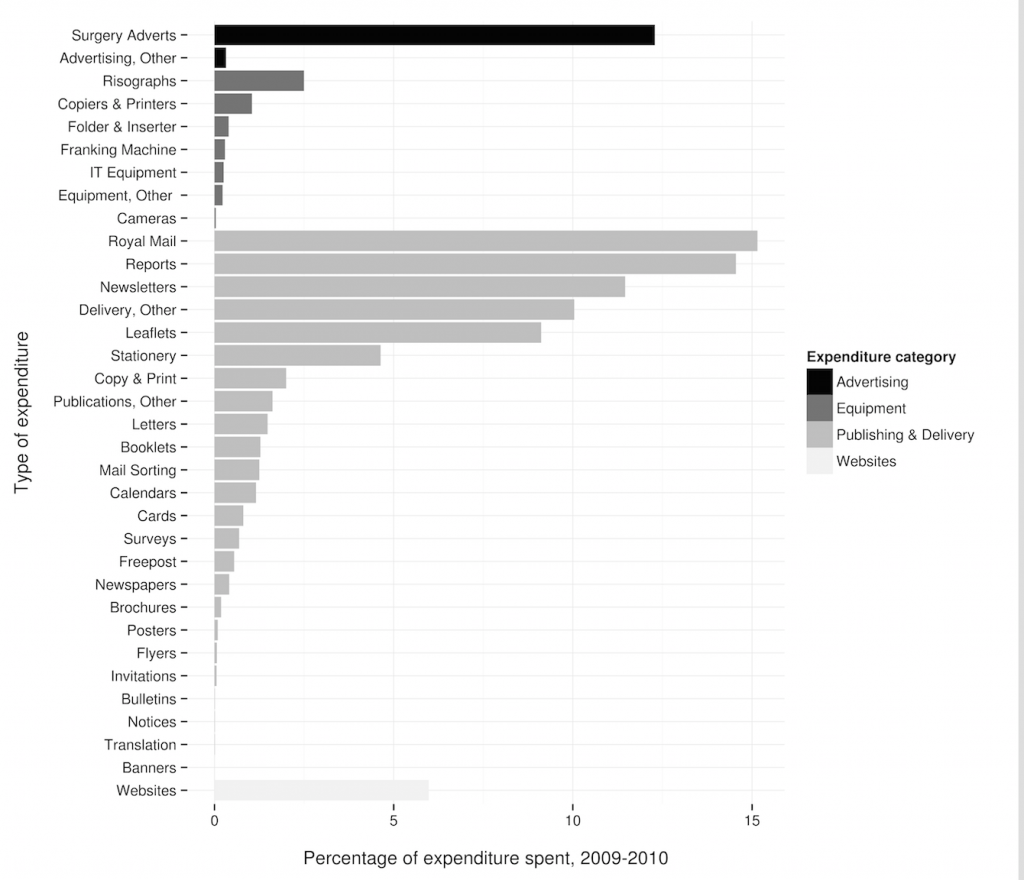 Before the introduction of the Communications Allowance, the prevailing assumption was that MPs would use this new allowance to the maximum. We find that this was clearly not the case. On average, MPs claimed only a little over 70% of it. Yet, there were also relatively large deviations. While a few MPs preferred not to use their allowance at all, others used almost two and a half times their limit by moving funds from other allowances into the Communications Allowance. 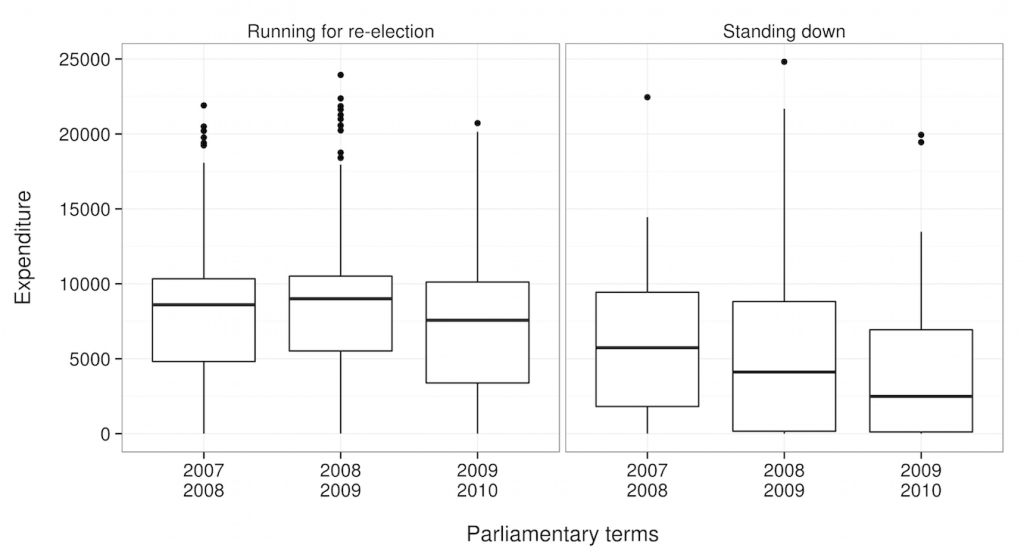 There is further evidence that re-election is an important incentive for MPs’ parliamentary communication in between elections. First, we find that senior MPs claimed significantly less from their allowance to communicate: every year served as an MP lessened the claims by £56.69. This may be because senior incumbents will have built a reputation with their voters. In contrast, MPs in more marginal seats have to increase the number of voters trusting them and so have far greater incentives to invest in communication. Indeed, we find that MPs’ claims increased with the marginality of their seat by £69.31 per percentage point.

With regard to MPs’ work in parliament, we find that the more an MP attends parliamentary votes, the more they invest in communication. They simply have more to communicate to their constituents as a result. However, where their work goes against the party line, these rebellious MPs do the complete opposite and spend less. This is especially the case among rebellious MPs in marginal seats.

Figure 3 plots the relationship between votes against party line and communication with constituents, for different levels of electoral safety. It shows that the negative effect of voting against the party line on communicating with constituents decreases with increasing majority; this may be because dissenting votes may lead part of the rebel’s electorate to realise that the rationale behind the rebel vote was unrelated or in opposition to their own preferences. 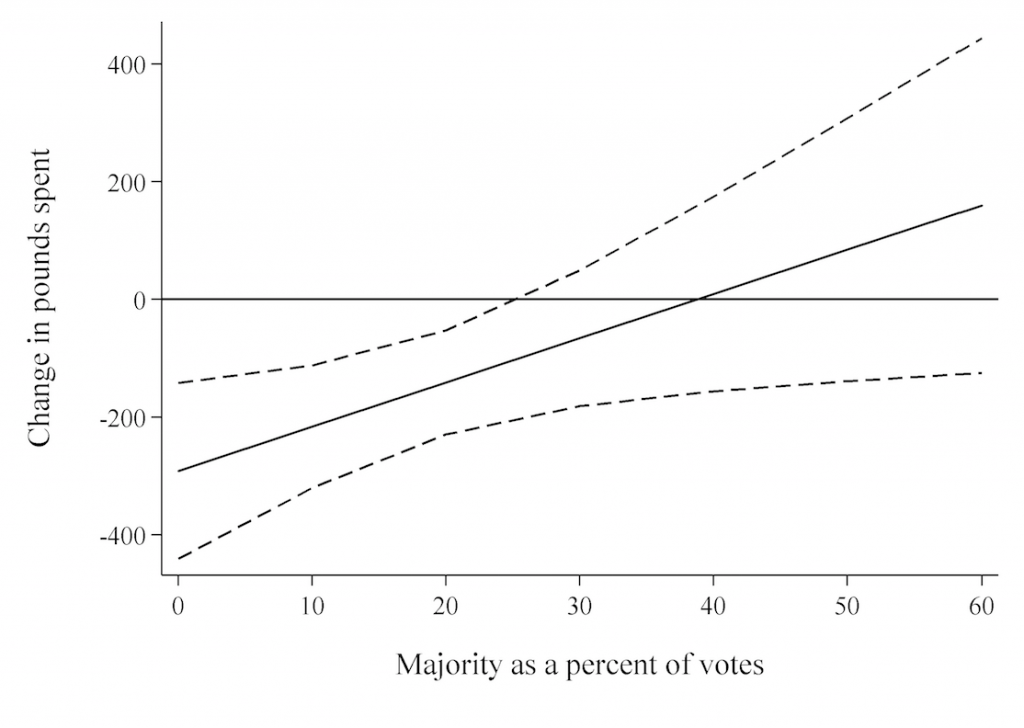 These findings all underline that the degree in which MPs invest in communication depends on re-election-related incentives. It is difficult, at least in practice, to separate communicative accountability from electoral accountability: what happens in between elections, and specifically how much MPs communicate with their constituents, also depends on what happened in the last election, and what might happen in the next one.

Katrin Auel is Head of the Research Group European Governance and Public Finance at the Institute for Advanced Studies, Vienna.

Resul Umit is a post-doctoral researcher at the University of Lucerne.