The pain of the UK’s Great Recession has been spread more evenly than previous downturns, with falling real wages across the distribution. David Blanchflower and Stephen Machin ask why this happened, how it compares with the US experience and what the prospects are for recovering lost wage gains.

There have been unprecedented falls in real wages in the UK since the start of the recession triggered by the financial crisis of 2008. This did not happen in previous economic downturns: median real wage growth slowed down or stalled, but it did not fall. Indeed, in past recessions, almost all workers in both the lowest and highest deciles of the wage distribution experienced growing real wages. It was the unemployed who experienced almost all the pain: they lost their jobs and much of their incomes, and many were unemployed for a long time.

But in the Great Recession and its aftermath, the economic hurt has been spread more evenly, with wages taking the strain this time. The real wages of the typical (median) worker have fallen by around 8-10% – or around 2% a year behind inflation – since 2008. Such falls have occurred across the wage distribution, generating falls in living standards for most people, with the exception of those at the very top.

Some groups have been particularly hard hit, notably the young. Those aged 25 to 29 have seen real wage falls of the order of 12%; for those aged 18 to 24, there have been falls of over 15%. The young have thus been faced with a double whammy; they cannot find jobs and there are still close to a million under the age of 25 who are unemployed, a quarter of whom have been unemployed continuously for at least a year. Even if young people can find a job, it tends to be low paid and frequently has fewer hours than they would like, often involving part-time rather than full-time work.

Why has this happened and what are the prospects for recovering the lost wage gains that workers experienced relative to previous recessions? Some commentators believe that significant real wage growth is coming, and that the prospects are good for a return to the real wage growth patterns seen before the downturn.

We are more pessimistic. We believe that unless the division of economic growth becomes more fairly shared to offset long-run trends towards greater inequality and unless productivity can be boosted to generate wage gains for all workers, then poor real wage outcomes for typical workers may be here to stay, just as they are in the United States. Realistically, it is hard to see the levels of real wages at the start of the recession being restored for quite some time. 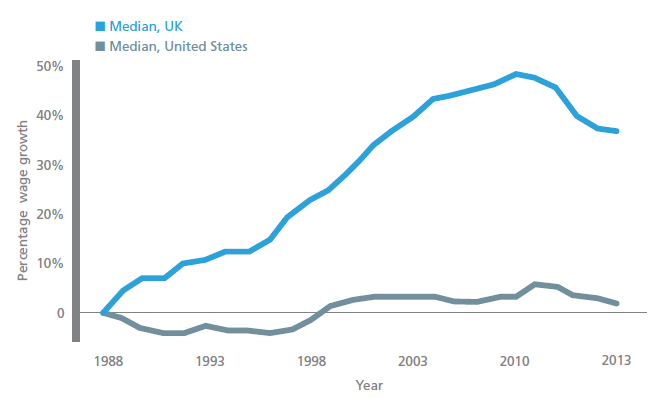 The UK median worker did relatively well in terms of real wage growth from 1988 up to somewhere around the early or middle part of the 2000s; but from this point, real wage growth began to slow down and then, in the wake of the 2008 downturn, it fell very rapidly indeed, moving into negative territory. Over the same period, the typical US worker fared rather badly, with real wages remaining below their 1988 levels up to 2000. Aside from a period in the first half of the 2000s and in 2009-10, when some very modest real wage growth occurred, real wage growth at the median was very weak.

Indeed, in 2013, median real weekly earnings were about the same in the United States as they were in 1979. This is probably of concern for the UK’s prospects since the United States went through a number of labour market changes some time before similar shifts in the UK. These include greater ‘flexibility’ and a massive reduction in the extent of union bargaining over wages.

Current policy debates about the role of falling real wages in generating falling living standards (for example, in discussions of the ‘squeezed middle’ and the ‘top 1%’) make the question as to whether the falls in real wages can be reversed an extremely important one. So what are the conditions in which real wages could start to grow again and quickly? A widely held view is that when the economic recovery kicks in seriously, then real wage growth will return. But wage growth forecasts by the Office for Budget Responsibility (OBR) have been remarkably over-optimistic.

Table 1 presents OBR forecasts at six points in time for nominal average earnings growth and real earnings growth (average earnings minus the OBR’s forecast of the consumer price index, CPI). Over time, each forecast has been downgraded from the previous forecast, which then proves to be overly optimistic and is downgraded again at the next forecast. In the most recent forecast for December 2013, the OBR is expecting real wage growth of 0.3% for 2014, which is down from the figure of 2.4% estimated in the June 2010 Budget and even as late as March 2012. 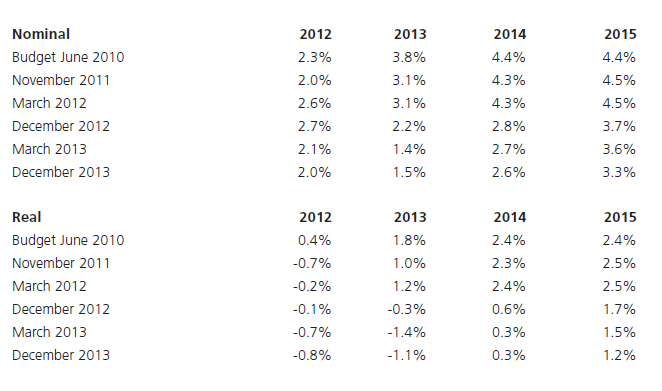 In its February 2014 Inflation Report, the Bank of England’s Monetary Policy Committee (MPC) made similarly overoptimistic forecasts for real wage growth: ‘In the central projection, four-quarter growth in real pay turns positive towards the end of 2014, as productivity growth picks up’. This is despite the fact that in the most recent earnings data for February 2014, real average weekly earnings continue to fall at a rate of 0.8% a year. So as ever, a rapid turnaround is expected in real wage growth: but if it hasn’t happened for years, why should it happen now?

We have some serious concerns with this relative optimism. First of all, to date, during the start of the recovery, the productivity performance of the economy has been weak and it has not created room for wage rises, even though it has been good news for employment and unemployment.

Second, because unemployment has not risen by as much as in previous recessions, when and if it falls, there is less scope than in the past for it to boost wage growth through the usual wage curve mechanisms (that is, the reverse of the wage-depressing effects of unemployment in Blanchflower and Oswald’s 1994 book, The Wage Curve).

Third, and a feature that predated the recession, because of inequality increasing average earnings by more than median earnings, the wages of typical UK workers are no longer keeping up with productivity gains made in the economy. Indeed, as Figure 2 shows, measures of total compensation growth track productivity quite well, but median wage growth has fallen behind since at least the early 2000s. 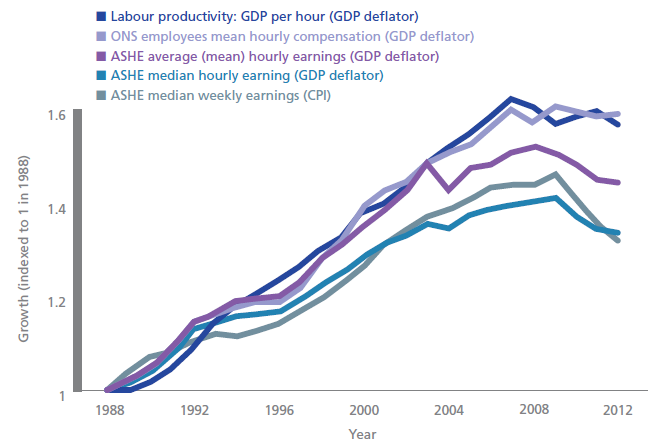 Median wages seem to have become ‘decoupled’ from productivity growth because of rising inequality, which means that a growing share of the value from productivity growth is absorbed by pensions and higher salaries for top earners. This again is something that the United States experienced earlier than the UK, and where real wage performance for the typical worker has remained poor for over 30 years.

For significant real wage growth to reemerge, all of these problems would need to be tackled. Productivity would need a sharp increase of the kind experienced much earlier in the UK recessions of the early 1980s and early 1990s. There are few signs of this happening, and the problem has been magnified by the UK’s dismal investment rates.

Even if productivity were to rise rapidly, the tendency for longer-run inequality trends to cause an unequal division of wages from productivity gains to the top (like bankers’ bonuses) would need to be addressed. Until that happens or until policy starts to address these issues seriously, it seems that the prospects of significant, rather than modest, real wage increases for typical workers are bleak.

The main drivers of wage pressure come from an intricate blend of ‘insider’ and ‘outsider’ forces – people who would like to work and are currently in or out of a job. There is some evidence that unemployment has started to fall (although it rose in the most recent release from the Office for National Statistics, ONS), so outsider pressures pushing down on pay may have weakened a little.

But it is quite clear that the economy is still well below full employment and there is a large amount of slack in the labour market. We see little evidence of widespread skill shortages, which would push up wages; and public sector pay freezes with continuing redundancies continue to push down on workers’ bargaining power.

Firms have started to perform better so their ability to raise pay levels may have increased slightly – but so far we see no evidence of any change in their willingness to pay. In line with our discussion of inequality, this does raise a key question: why, if nothing changes, wouldn’t they continue to keep any gains to themselves? It stretches credulity to believe that all of a sudden bosses will hand over pay increases to their workers when they have shown no inclination to do so for several years.

Note:  This article was originally published by the Centre for Economic Performance and gives the views of the authors, and not the position of the British Politics and Policy blog, nor of the London School of Economics. Please read our comments policy before posting. Homepage image credit: Philip Brewer

David Blanchflower is professor of economics at Dartmouth College and a former member of the MPC and CEP.