Forecasting election results is hard. Forecasting UK election results is even harder. Forecasting in 2015 will be harder still. Over the coming months, this blog will showcase a wide variety of academic research analysing the forthcoming UK general election, with a particular focus on those researchers who are trying to predict the election outcome. In the introductory post to the LSE’s new General Election blog, Jack Blumenau and Simon Hix outline some of the main challenges of forecasting elections within the complicated British electoral context and introduce some of the forecasters taking on this daunting task. They ask a simple question: Why are UK elections so hard to forecast?

First of all, predictions become more difficult as the number of outcomes one is trying to predict increases. Relative to their celebrated American counterparts, UK forecasters have to produce forecasts for a very large number of individual races. There are 650 parliamentary constituencies in the UK, and useful forecasts require predictions for each of these. By contrast, US presidential elections require only 50 separate predictions (one for each state), and even elections for the House of Representatives require only 435, one for each Congressional district. Furthermore, there are also a very large number of “swing” constituencies in the UK where the incumbent MP only won by a narrow margin in the previous election. In 2010, nearly 200 MPs were elected with a margin of victory of less than 10 percentage points. These constituencies present a special challenge to forecasters, as they are both the hardest and most important ones to predict accurately. The fragmentation of the vote, visible in recent polls, suggests the number of such contests will increase in the run-up to May 7th.

In addition to more competitive races, there are also more parties with a chance of winning representation in Westminster in 2015. While not all will be competitive in all constituencies, correctly forecasting seat shares for multiple parties is an order of magnitude harder than in the two-party case. As others have noted, predicting election results in the UK is considerably harder now than in the long post-war era of two-party politics.

The more information available to researchers about the vote intention of the electorate, the better the forecast will be. The main source of information is public opinion polls, which ask a sample of people who they will vote for at the next election and then infer the election outcome for the whole population from that sample. While the frequency of national opinion polls in the UK has increased in recent years, the 2010 election revealed a serious problem: national level polling was subject to industry wide ‘bias’. Specifically, polling companies over-estimated the nationwide support for the Liberal Democrats by about 4 percentage points. Various techniques can be used to correct for small biases of individual polling companies, but when all the polls are over- or under-estimating a particular party’s vote share, it’s hard for forecasters to correct for this. Furthermore, there is no clear evidence of why the polls attributed too much support to the Lib Dems, meaning that it’s hard for pollsters to prevent a similar bias, or a different one, occurring in the future.

Even more problematic is that while national level polls are relatively good at measuring the overall level of support in the country, they do not do a good job of measuring party support within each constituency. Knowing that the Labour party would win 30 per cent of the national vote does not tell us much about how it would fare in Newbury, Newcastle-under-Lyme, or Na h-Eileanan an lar. Estimating the support in each constituency is essential for accurate forecasts, but because of the expense of commissioning large number of local polls, there are few of them. This lack of local polling is probably the biggest challenge now facing forecasters in the UK. For example, thus far in the run up to May 2015, only 104 of the 650 UK constituencies have been polled individually – just 16 per cent of the total. Unless Lord Ashcroft, or another wealthy pollster, dramatically increases the number of local polls, forecasters in the UK are forced to make assumptions about how national-level opinion will translate into constituency-level results. These assumptions have caused problems for forecasters of previous UK elections, and deficiencies in local polling data remain the key challenge in 2015.

This election is especially complicated

A key challenge in forecasting UK elections is that national vote shares for each party do not translate directly into the number of seats each party wins. When most people think of election night they picture Robert McKenzie or Peter Snow explaining uniform national swing (UNS): the canonical method of translating national level polling outcomes into individual seat allocations. UNS suggests that if the Labour vote share measured in the polls is four per cent up on the previous election and the Conservatives are four per cent down, there is a four per cent ‘swing’ towards Labour. Four per cent can be added to the Labour share and four per cent removed from the Conservative share in each constituency, and any gains or losses predicted. While UNS has proved to be a relatively good model in previous years (and the prospect of its demise has been discussed before), it is likely to be less useful for forecasting the 2015 election. Most simply: swing doesn’t look uniform across the country anymore. This is clearest when looking at the prospects of the Labour party, who are trending about 2-3 percentage points above their 2010 result in most of the UK, but currently are about 10 percentage points below their previous results in Scotland. Similarly, the Liberal Democrats are down on their 2010 results across all of the UK, but are performing significantly worse in the South West than in other areas. Such non-uniformities are a problem for UNS, and therefore a problem for forecasters.

Additionally, forecasters can usually draw on a long history of electoral performance of individual parties to make predictions about future performance. Not so in 2015. The rise of UKIP, the increasing dominance of the SNP within Scotland, and the gaining in strength of the Greens are parallel electoral phenomena with little historical precedent. As the dominance of the Conservative and Labour parties has declined over time, the importance of other parties to the electoral arithmetic has increased, making forecasts of smaller party seat shares even more important. Even if insurgent parties do not win any seats, the way they take votes can affect individual results between the established parties. In the absence of historical patterns of these new parties’ performance, forecasters are even more reliant on recent polling information which makes reliable predictions harder.

Who is foolish enough to try?

Overall, UK electoral politics is complicated, and forecasters are forced to make decisions to deal with this complexity. First, they must decide how much weight to put on the polling information, relative to other factors such as the results of previous elections. Polls are simply snapshots of public opinion, not themselves forecasts of future voting behaviour. For example, the forecasts produced at Polling Observatory, ElectionForecast.co.uk, and electionsetc.com, all incorporate information from previous elections to determine how current polling will predict election day vote shares. The historical analysis in each model is derived from well-established political science research, but each model adapts the methodology in important ways. Second, each forecast must decide how the predicted vote shares for each party translate into seat shares. The traditional approach of using UNS is one option, but, as the usefulness of UNS declines, forecasters are increasingly employing different methods in this area as well. We will have much more to say about these differing approaches in the coming months, but the upshot is that different forecasts rely on different assumptions and therefore – even when they make use of similar data – produce different results.

For example, the plot below shows current (as of December 4th) party-seat forecasts for a selection of models: the current forecasts from electionsetc.com and electionforecast.co.uk, as well as a simple UNS variant. There are large differences here. UNS gives a majority to the Labour party (barely, with 326 seats). Both electionsetc.com and electionforecast.co.uk have the Conservative as the plurality party, but differ in terms of the number of seats they forecast for smaller parties (who are likely to play a key role in post-election coalition negotiations). 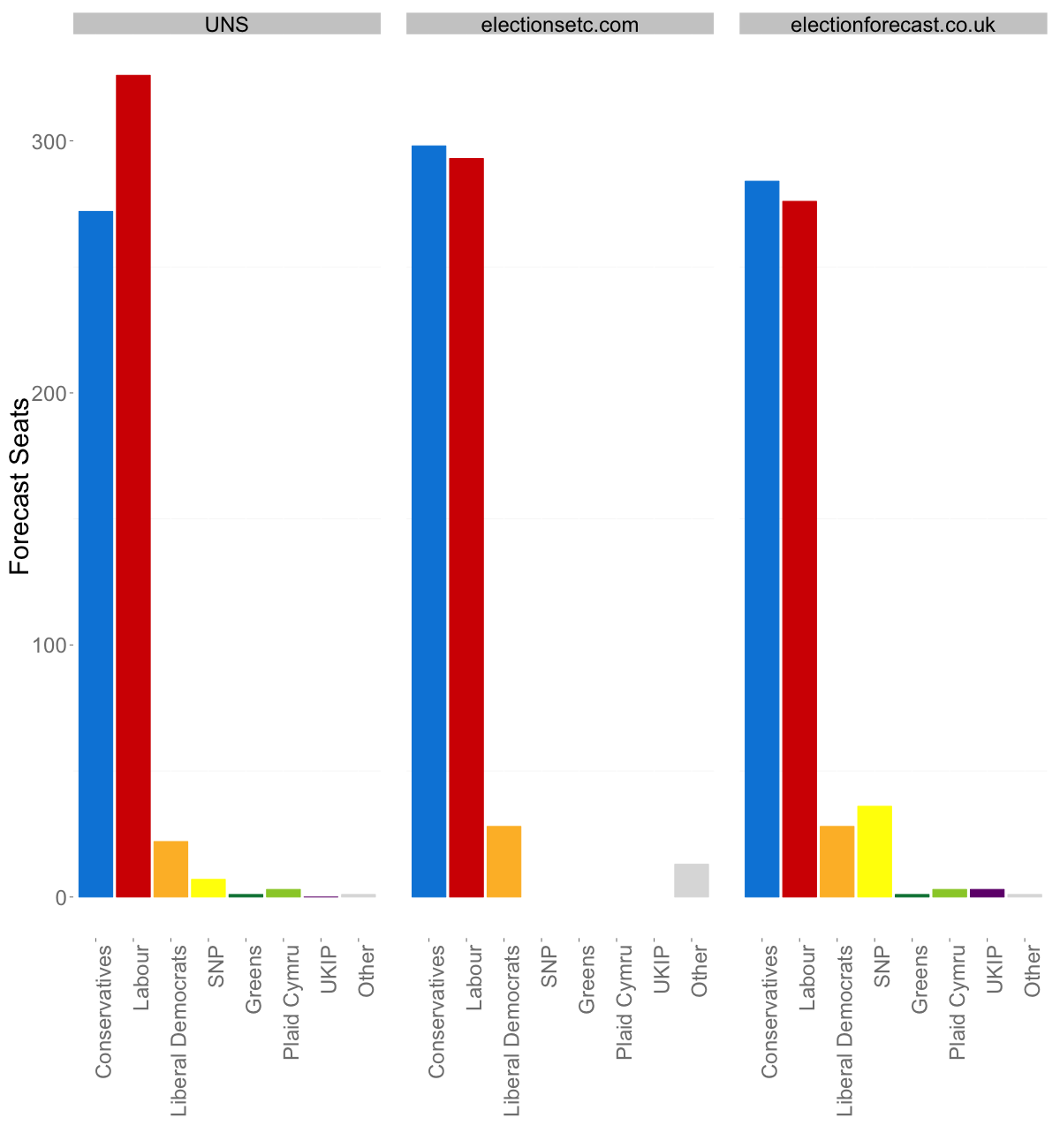 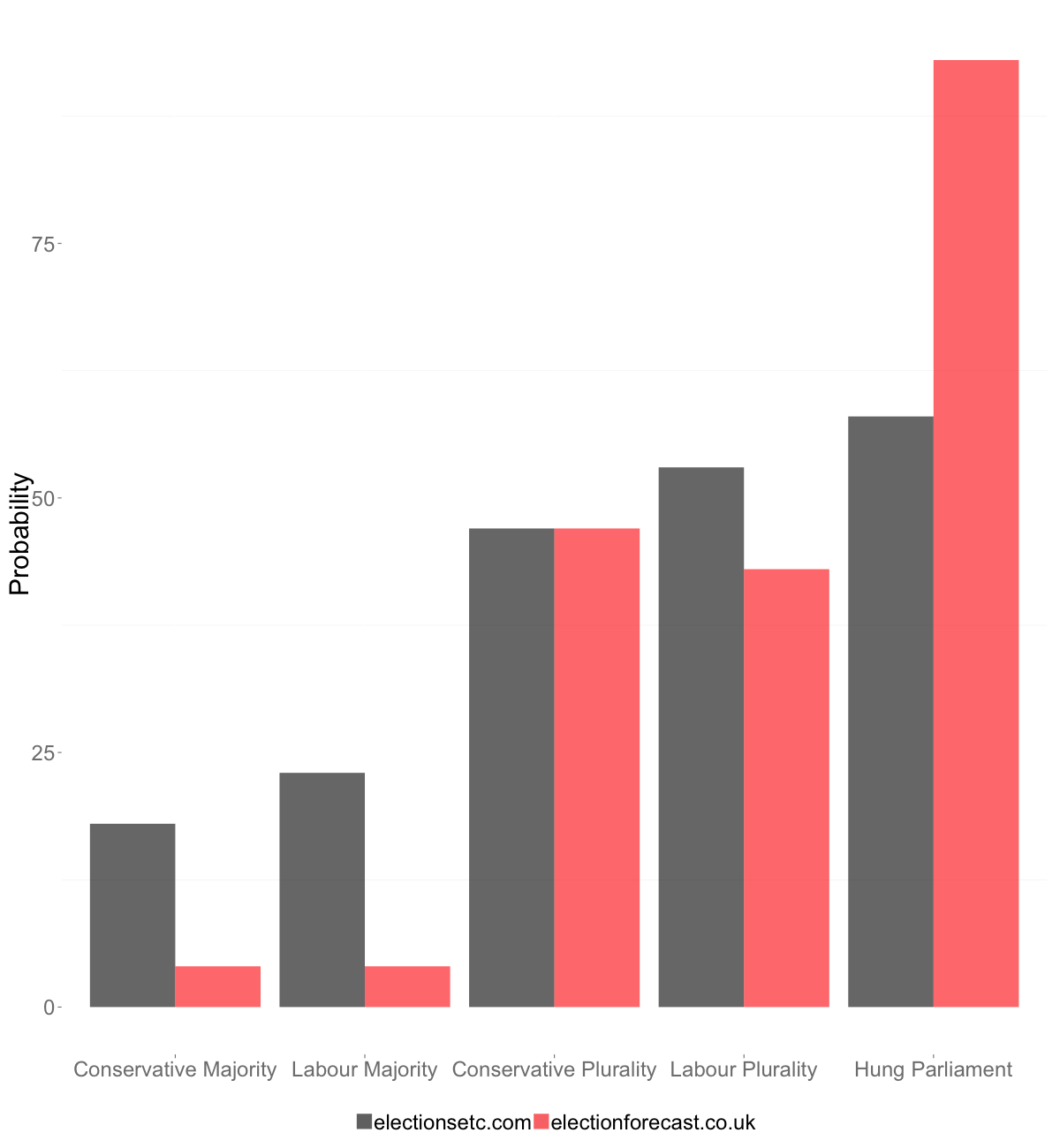 The 2015 UK general election promises to be politically memorable. However, it also promises to be memorable in terms of UK political science. The breadth of forecasting models in development for this election is impressive. Each project tackles the problems outlined above in different ways, and each will offer important insights into the probable distribution of power in Westminster after May 7th. We will be keeping track of how the predictions from these models change over the campaign and, of course, how they perform on election night.

Note: The title of this post is a quote from Danish physicist Niels Bohr.