With the SNP surging in Scotland and the break up of the union as plausible as it has ever been. What are the different options for configuring the UK state? In this article, Andrew Blick writes about what the constitutional future might look like.

Inbuilt within the United Kingdom is the potential for instability. It is a multi-nation state, like Belgium, Canada, Spain and – some would say – the European Union. At present, it consists of three nations – Wales, Scotland and England; and a fourth territory, Northern Ireland, the status of which is complicated and controversial. This internal differentiation is not necessarily a weakness. But it has at times been a source of problematic tension. Pressure for more autonomy, or even secession, has come from within some of the national groups incorporated into the UK. Early in the history of the state, during the eighteenth century, Scottish Jacobite rebellions took place. The place of Ireland within the UK has often been a source of discord, with both Unionists and Irish Nationalist at times perpetrating acts of violence to further their respective causes. Early in the 1920s, most of Ireland split from the UK to form the Republic. Under the terms of the Belfast or ‘Good Friday’ Agreement of 1998, the six counties of Northern Ireland too may one day leave the UK and rejoin with the South.

An emergent issue in recent decades has been the rise of political nationalism and independence movements in other parts of the UK, including in Wales and most prominently in Scotland. The Scottish National Party has held office at devolved level since 2007; and the surprisingly close result in the referendum of September 2014 has given its cause added momentum. A break up of the union of England (including Wales) and Scotland that took place in 1706-7, inaugurating the UK as a state, is now as plausible as it has ever been. Unlike in earlier eras, it could take place peacefully, with the consent of both sides.

Consequently, if we are to seek to answer the question ‘what is the future of the UK constitution’, the answer may be that it does not have one, at least in its current form. The SNP wants to leave; while those who wish the UK to survive are altering its internal arrangements to accommodate a more autonomous Scotland within it. But what are the different options for configuring the constitution?

Option one is a unitary state. Under this centralised model, ultimate power resides at the centre, with the UK Parliament in Westminster and the UK executive in Whitehall. Often in the past observers have used the term ‘unitary’ to describe our arrangements. In some senses they are correct. Our doctrine of ‘parliamentary sovereignty’ and the tendency to override local government from London fit with this approach. But the UK has always included within it some official allowances for national diversity, such as different arrangements for religion and language, and multiple legal systems. Northern Ireland even had its own legislature and executive from the 1920s to the 1970s. It is better, therefore, to describe the UK as having been a ‘union state’ from the outset.

Option two is devolution. Under this system, the centre provides for a tier of elected regional or national authorities, transferring some power downwards to them, but without fully surrendering ultimate control. In the late 1990s, devolution was introduced to Wales, Scotland and arguably Greater London, and re-introduced to Northern Ireland. But despite its many successes, this system has not prevented – and may have encouraged – the rise of nationalism in Scotland, threatening the integrity of the UK. Moreover, it is asymmetrical. Outside Greater London, England has yet to share in the benefits of devolution.

Option three is a federal system. Under an arrangement of this type, ‘sovereignty’ is shared between different tiers of government, each with its own respective spheres of operation. Typically, the rules are set out in a written constitution, with a supreme court responsible for enforcement. Arguably the UK has been moving, through its adoption of devolution and other reforms, in practice increasingly in a federal direction. Some hope that federalism could provide Scotland with a degree of self-government sufficient to induce it to remain within the UK.

However, the full adoption of federalism would entail the end of the notion of Parliament as a ‘sovereign’ body, since it – like all other institutions – would be subject to the constitution, as interpreted by the UK Supreme Court. There is cultural resistance to this change. Furthermore, a practical problem involves how to incorporate England into a federal UK. If England were included as a single unit, since it accounts for more than 80 per cent of the population, federalism might create instability worse than that which it sought to correct. Another approach could be for England to participate in a federation in a series of more manageably-sized regions. Yet it is not clear how to demarcate these territories, and whether they would command sufficient popular attachment to make the federal project politically viable. Nonetheless, a federal UK may become the most plausible means of preserving the UK, necessitating a resolution to this English dilemma.

Option four is some kind of confederation or even federacy, that is a looser arrangement still than a federation. In some senses, the UK is moving in this direction. It already has – as a ‘union state’ – more diversity in certain respects than might be found even in a federation, for instance through the existence of three different legal systems (in Scotland, Northern Ireland and England), with a fourth possibly coming in Wales. The extensions in Scottish devolution presently contemplated, in the fiscal and other fields, are substantial. Other parts of the UK, such as Wales, are likely to seek at least some of these new powers for themselves. At the centre, there are demands to exclude Westminster MPs from voting on matters that are devolved in the particular areas they represent. The implication of this idea – though it may not come about – could be a reduced role for Scottish MPs in UK level decision-making.

When Scotland and England were negotiating the union in 1706, the opening position of the team of Scottish commissioners was to call for a ‘federal union’, by which they meant a loose attachment between the two nations, with a single monarchy and external policy, but retaining their existing parliaments. At the time, this model was not on offer from the English, who had the stronger bargaining position. But it may be that the objectives some from Scotland sought in 1706 are belatedly coming about. The position of Scotland under this arrangement may not differ greatly from the independent Scotland envisaged by the SNP.

For more on ‘The Future of the British constitution’, watch the LSE Public Event from 21 January 2015

Note: This article was originally published on our sister site, the British Politics and Policy blog.

Andrew Blick is Lecturer in Politics and Contemporary History at King’s College London and author of ‘Beyond Magna Carta: a constitution for the United Kingdom’ (Oxford, Hart, 2015 forthcoming). 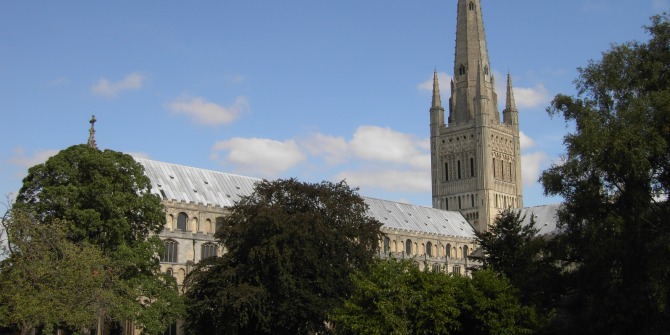