For those concerned with rising levels of poverty and inequality in Britain, David Cameron’s announcement on Estate Regeneration is welcomed, in that it demonstrates some concern on the part of government that poverty continues to be a fact of life for many. However, Sarah Longlands argues that scratch beneath the surface of the government’s proposals and some concerns emerge.

As Anne Power pointed out on this blog in March, the emphasis of the ‘regeneration’ upon demolition is of particular concern, not only because of the significant costs involved but the hugely disruptive effect this has on residents. Furthermore, from the albeit sketchy proposals to date, the very idea of a ‘housing estate’ is devalued through the characterisation of estates as ‘run-down’, ‘sink’ and rife with social challenge; a place where the feckless, addicted, and badly behaved congregate.  This disapproving tone is reminiscent of early twentieth century calls to sort out city slums, a form of what has been called, ‘benevolent paternalism’. Then, as now, Cameron’s proposals also rely heavily on assumption about how particular improvements in physical infrastructure will lead directly to improvements in people’s lives.  But as the lessons of the past suggest, improving people’s lives takes more than physical renewal, as Orwell remarked in ‘The Road to Wigan Pier’:

“Bishops, politicians, philanthropists and what not, enjoy talking piously about ‘slum clearance’ because they can thus divert attention from more serious evils and pretend that if you abolish the slums, you abolish poverty” (Orwell, 1937).

The reliance upon material outcomes as a measure of regeneration’s success also point to another concern with the government’s plans: are the government’s proposals designed to help the people who currently live on these estates, many of which are social housing tenants?  Implicitly, within Cameron’s article there is a suggestion that these social housing tenants are at the root of the area’s problem.  Indeed, in his reflections on lessons from past regeneration attempts, Cameron characterises “tenants’ concerns about whether regeneration would be done fairly” as one of the obstacles to progress.  This is symptomatic of a preference for owner occupation, which is also reflected in the government’s Housing and Planning Bill.  The preference for owner occupation is also, by implication, a preference for a particular type of person who is materially self-sufficient, pays their council tax and generally makes fewer demands upon the cash-strapped state. But it is important to recognise that not everyone is in this position and that, in an effort to support inclusive rather than exclusive growth, social tenancy should still be a component of future housing provision.

The third potentially problematic aspect of the Cameron’s proposal is its financing, specifically that the regeneration of estates “will work best in areas where land values are high” because the prospects for private sector investment are greater.  Higher land values, it is hoped, will not only enable the building of “new private homes, built attractively and at a higher density” but, provide enough surplus to fund the “the regeneration of the rest of the estate”  – presumably less attractively and located at a distance.  This raises concerns because it implies that the rationale for whether an estate receives support becomes proportional to its economic viability; its investment potential as opposed to its human potential.  Once again, as in previous regeneration schemes, economic outcomes become conflated with human welfare.  Furthermore, if the success of the scheme is reliant upon high land values, this may mean that estates in less well off areas, particularly in parts of Northern England, are side-lined.  Arguably it is the estates in areas of lower land value which may be precisely the types of places that could benefit most from state intervention. 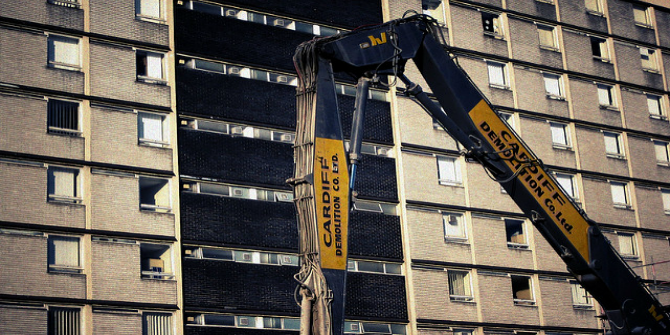 At IPPR North we’ve been doing our own research in recent years on what makes for a successful regeneration scheme.  For example, our report on Rebalancing Local Economies in 2010 emphasised the importance of an area’s social infrastructure which comprised the social networks, capital and the vibrancy of voluntary sector organisations, as a key factor in helping to explain why it was that some neighbourhoods had improved while others had not.

Similarly, in our 2013 report, Love Thy Neighbourhood, we again found evidence of the importance of community involvement in regeneration alongside support for community and voluntary activity as facilitating factors in creating real neighbourhood improvements.  While supportive of the government’s recognition of the need for change in our communities, we argue that regeneration needs to do more than rebuild housing provision.  Previous evaluations of regeneration schemes demonstrate the importance of valuing and rebuilding people’s lives through access to good quality jobs, community safety, health and well-being as well as support for civil society more generally – as outlined in our thinkpiece setting out key questions for our new three-year research programme on the future of civil society.

IPPR North argue that as much attention needs to be paid to the social infrastructure of a place, and its ability to support change, as the challenge of redeveloping the physical context.   Crucially, government policy should focus on reconnecting these areas up to wider social and economic opportunities instead of treating them simply as islands of disappointment where the only option considered is the deceptive simplicity of demolish and start again.

Sarah Longlands is a senior research fellow at IPPR North, the dedicated thinktank for the north of England. She specialises in planning, cities, growth, human capabilities and growth, and tweets at @sarahlonglands.  Sarah leads on IPPR North’s Future of Civil Society three-year research programme, which launched in April.