There are significant problems with statistics-based policy, argues Mark D. White. He writes that governments should eschew the use of output or well-being statistics and instead focus on respect and responsiveness. This would mean encouraging the ability and right of individuals to make choices in their own interests and responding to the needs and concerns of the people as expressed by the people.

In a previous post, I explained the problems with basing government policy on measures of happiness or subjective well-being. In short, happiness is too vague to define precisely enough for the purpose of measurement; too subjective and qualitative to be translated into a quantifiable measure and aggregated; and too ethically fraught to incorporate into government policy. What’s more, these problems attach to any conception of well-being that the government may try to measure in order to use for policy purposes. Specifically, any subjective conception of well-being (as opposed to “subjective well-being,” psychologists’ technical term for happiness) suffers from the same problems that plague happiness itself.

There are other significant problems with statistics-based policy, however. For example, it substitutes the judgment of researchers or bureaucrats regarding what makes people better off for the judgment of individuals themselves. Official measures, whether traditional ones such as GDP or new ones such as happiness, impose one conception of well-being on citizens; policies are then designed and implemented to increase well-being as policymakers define it, regardless of whether it corresponds to what the people themselves value. In the end, it is not the well-being of the people as they understand it that is furthered, but the policymakers’ idea of what the people’s well-being is. Furthermore, the government sets goals for their chosen statistical measure based on abstract economic models and then interprets deviations from those goals as evidence of crisis. Considered together, the government bases its policies on mathematical theories using artificial government statistics based on flawed measures of arbitrarily defined conceptions of well-being. This amounts to discovering problems in their data rather than observing them where they exist: in the real world.

But the government does not need to define or measure well-being at all. There is a better way of designing government policy that eschews the use of output or well-being statistics and instead focuses on respect and responsiveness.

Respect refers to the ability and right of individuals to make choices in their own interests (in a way consistent with all others doing the same). By this standard, the government should focus on enabling people to make these choices in their interests instead of deciding for them what total output or well-being should be when all is said and done. Policymakers have no basis to question the quarterly level of output or the average happiness at any given time if these statistics result from the voluntary activity of people making choices in their interests. The fact that people are making voluntary decisions is evidence enough that interests are being furthered and the “proper” level of output or happiness is being achieved; the government should then concentrate on cases in which decisions are not voluntary or persons are being harmed wrongfully by the actions of others. This represents a change from policy that focuses on outcomes to one that focuses on process: the government should ensure that institutions enable the maximal degree of free choice for all and not be concerned with whether the outcomes conform what their models, data, and targets predict.

Responsiveness refers to the more positive or active aspect of government policy, which should respond to needs and concerns expressed by the citizenry. Policymaking according to statistics is divorced from the concerns and problems of people in the real world; a four percent increase in GDP is of little comfort to the woman whose children are starving, the man who can’t get quality healthcare, or the parents whose children are in failing schools. Rather than trying to find problems in data, the government should respond to the needs of the people as expressed by the people; instead of trying to influence statistical aggregates with a tenuous link to real people, they should tackle specific problems that affect people directly. Citizens aren’t going to contact their elected representatives when their well-being feels a bit low. They’re going to contact them when they can’t find work, when their streetlamps out, or when they’re afraid to go out at night. These are the problems that should be addressed, not a 0.2 per cent lower-than-expected rise in GDP or a fall in general happiness from “very happy” to “fairly happy.”

This is the difference between looking for a problem that has to be found and seeing a problem that presents itself. The government shouldn’t waste its time constructing computer models and gathering data in an attempt to find a discrepancy—it should see and address the problems in the real world where they exist. To some extent the government already does this, of course, but they would have more resources to devote to it if they didn’t waste time and money gathering, processing, and sifting through data to find problems that are right outside their windows or in their morning papers.

Making policy in a responsive manner does, however, imply a responsibility on the part of the citizens. If the people expect the government to respond to their needs and further their interests instead of acting in what policymakers regard as the people’s interests, the people need to tell the government what their interests are. They need to become more active in local and national politics; they need to demand more effective and responsible journalism from the media. Likewise, the government has to make sure all voices can be heard, which may require extra effort and outreach to hear from underrepresented and underprivileged groups. All of this takes effort and resources, but in the spirit of increasing civic engagement and responsive government rather than relying on detached and problematic statistics to craft policy.

Government policymaking based on respect and responsiveness does not imply a smaller government or a larger government. It has little to do with the scale or scope of government, because it speaks less to what the government does and more to how it does it. Liberals, conservatives, and libertarians have different ideas about how much and what the government should be doing, but they can all agree that it shouldn’t be wasting valuable resources doing something that, almost by definition, it cannot do well. Economists have been urged since the financial crisis began to get their heads out of their equations and models and back into the real world. Policymakers would be wise to heed this call as well.

Note: This article gives the views of the author, and not the position of the British Politics and Policy blog, nor of the London School of Economics. Please read our comments policy before posting. Featured image credit: Cliff CC BY 2.0

Mark D. White is chair of the Department of Philosophy at the College of Staten Island/CUNY in New York City. His latest book, on which this post is based, is The Illusion of Well-Being: Economic Policy Based on Respect and Responsiveness (Palgrave, 2014). His website is http://www.profmdwhite.com/. 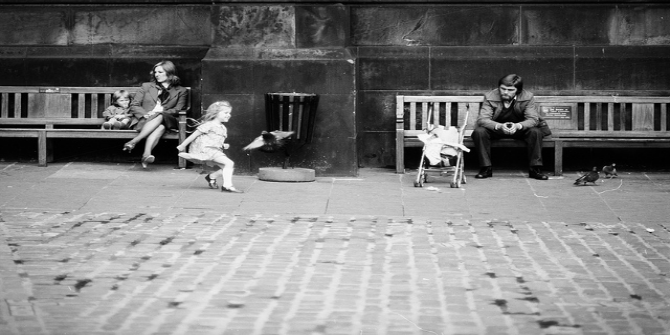