Research on part‐time work has concentrated on the experiences of women but male part‐time employment is growing in the UK. Tracey Warren and Clare Lyonette find clear evidence of low‐quality male part‐time employment, when compared with men’s full‐time jobs. Men working part‐time also express deteriorating satisfaction with jobs overall and in several specific dimensions of their jobs.

More and more men in the UK are working part-time. While men in the past tended to work full-time or not at all, there has been a clear increase in the numbers in part-time jobs, especially since the recession of 2008-9. 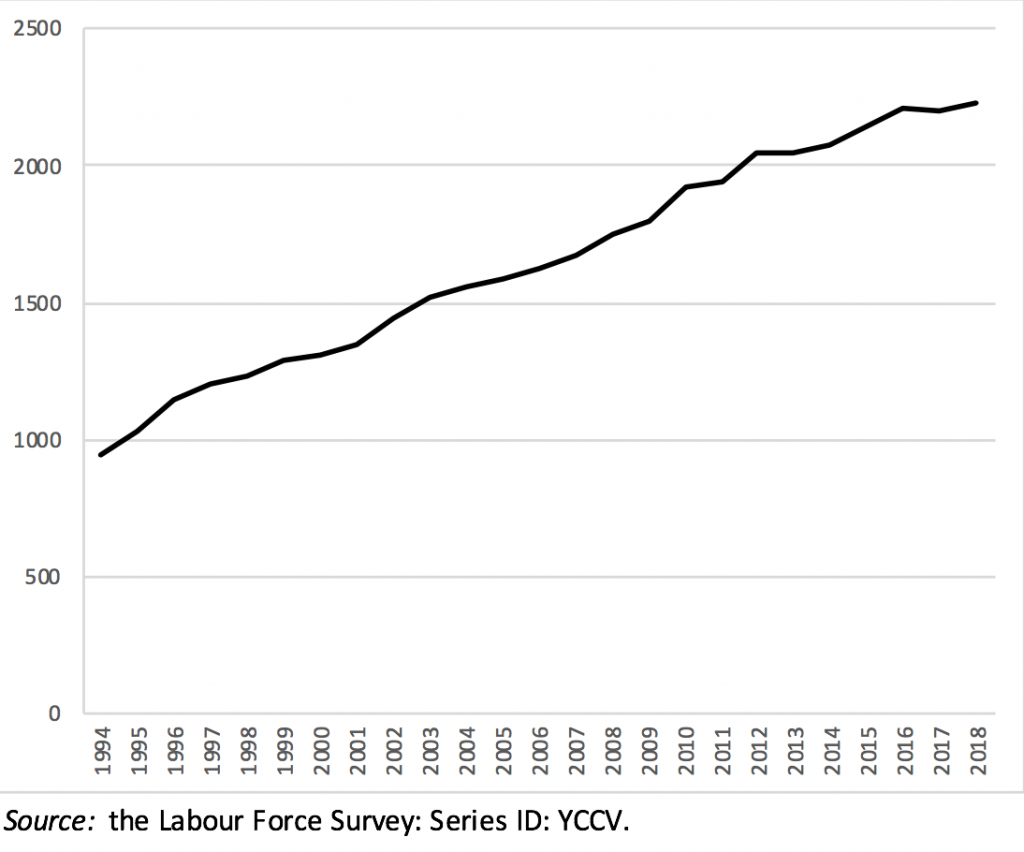 The growth in male part-timers raises intriguing questions for academics, policy-makers, and organisations that campaign for workers’ rights because our knowledge about part-time workers, and part-time jobs, is based mainly on the experiences of women, with the UK having one of the highest rates of female part-time employment in Europe.

New questions stimulated by more male part-time working include, for example: are more men entering low quality part-time jobs in the UK because they are struggling to find suitable full-time opportunities, with problems deepening in a tightening labour market? Or perhaps more male part-time employment is actually a UK success story: it could signal a positive development in which men are seeking out opportunities to work shorter weeks, in good jobs, reacting against a well-known ‘long hours culture’ that leaves full-timers with too little time and energy for non-work pursuits. Might a rise in male part-time employment lead to greater equality between couples and in society more generally, or might it lead to greater inequality between the highest-paid and the lowest-paid, with knock-on effects for family poverty? Our research seeks to fill large gaps in this area.

Rather than a positive story of more male part-timers working in good quality jobs, and satisfied with them, instead we found clear evidence of growing involuntary male part-time employment, low quality part-time jobs for larger numbers of men, and declining levels of job satisfaction, with working-class men hardest hit.

Male part-timers before and after the 2008-9 recession

Our research compares male part-time workers with full-timers, before and after the recession of 2008-9, using data collected between 2006 and 2012. We used a range of indicators to signal whether a job was of lower or higher quality, drawing upon influential work on part-timers’ job quality by Tilly. We explored part-timers’ wages compared with full-timers; the extent to which the men could use their skills in their jobs; the training on offer to them; what responsibilities they had at work; their risks of job loss; opportunities for promotion; and the quality of their work-time (Table 1).

We found a wide part-time penalty in job quality among men already in 2006, that deepened by 2012 (Figure 2 shows the proportions of men whose jobs fell into a ‘bad category’ for each variable examined, e.g. they were low waged, or had no opportunities for promotion). Though male part-timers did see improvements in some elements of their jobs, we paint a grim story overall of a growing low-waged, male part-time labour force, increasingly underemployed in terms of their qualifications and with more men receiving inadequate training to improve their jobs and prospects.

Figures 2a-c: percentage of men with a ‘bad’ dimension to their job by work-time. 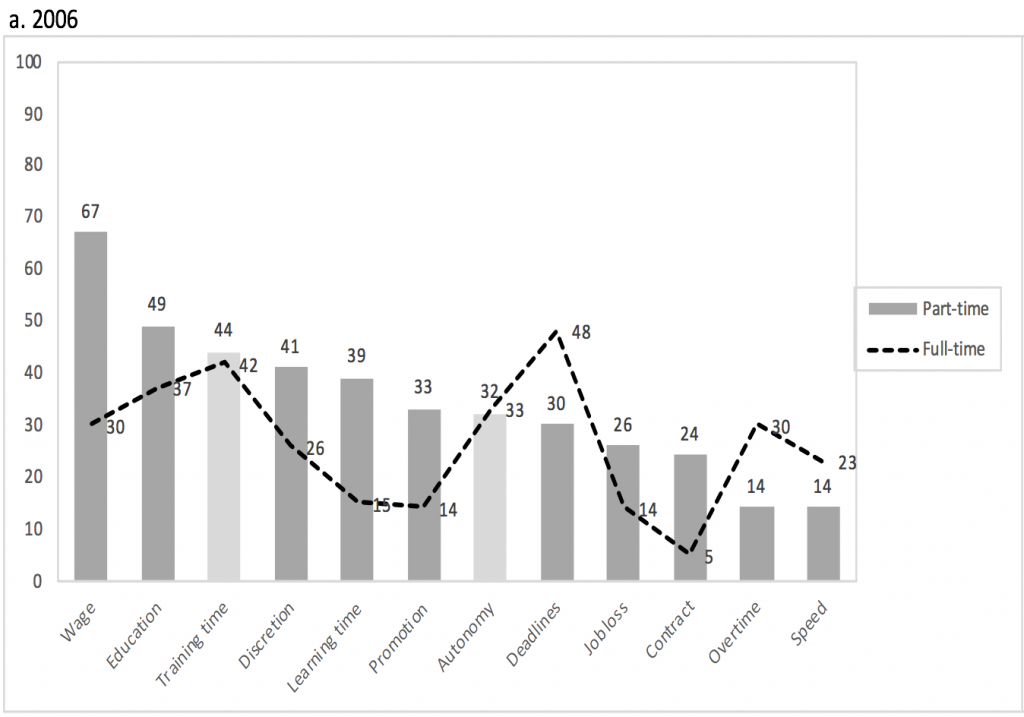 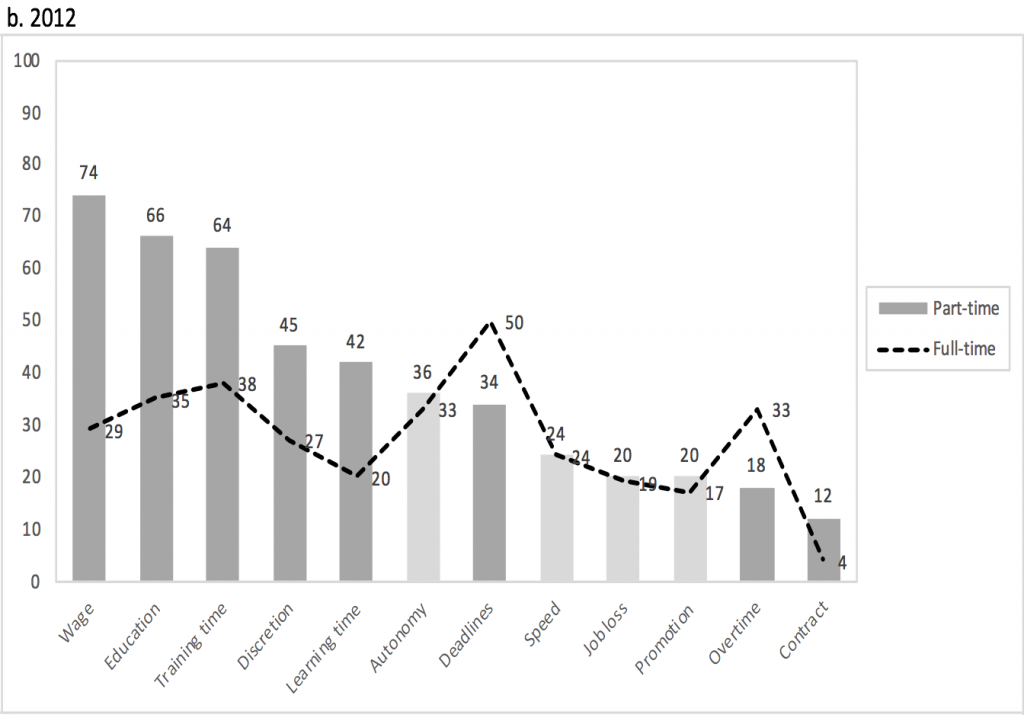 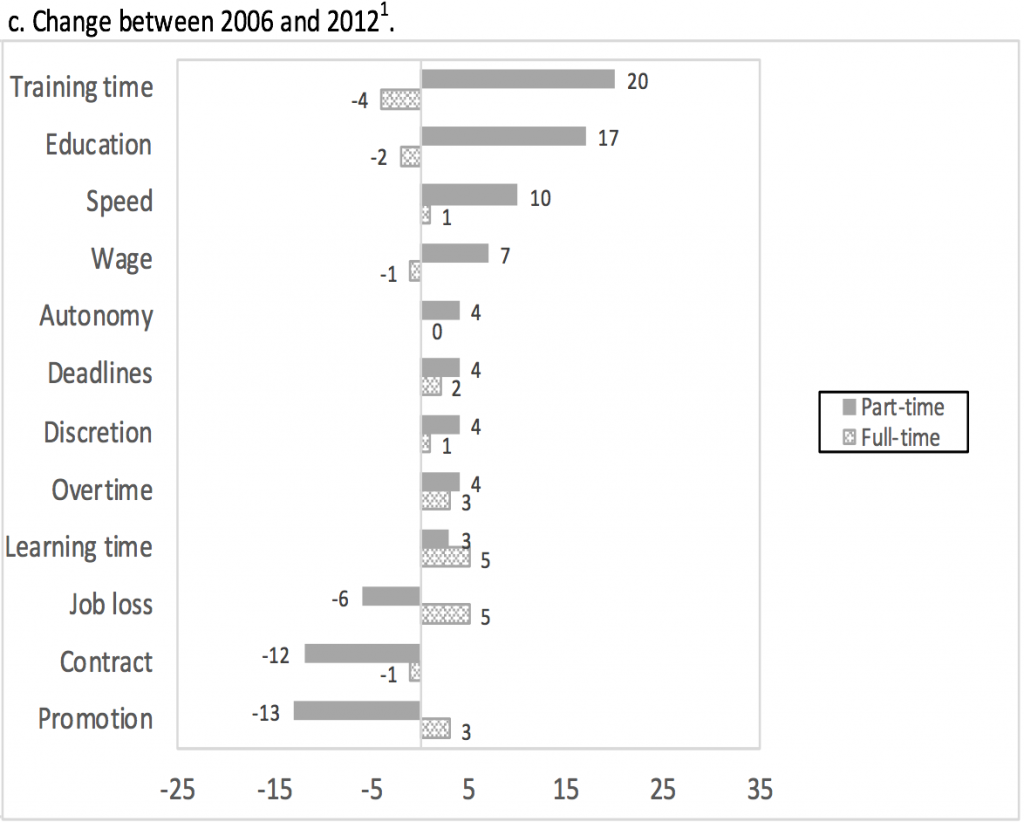 Source: authors’ analysis of the SES. Note: the light coloured columns in Figures a and b signal that the full-time/part-time gaps are not statistically significant. 1: positive scores in Figure C indicate more men had bad dimensions to their work by 2012.

Given the low quality of men’s part-time jobs we wondered if, during challenging times when the job market is tight and better quality jobs are scarce, men might be willingly embracing part-time working and be more satisfied with such jobs, despite their problems. We found that, rather than job-satisfied male part-timers, 2006-12 saw a turnaround in the men’s overall assessments of their jobs when compared to male full-timers (Figure 3). In 2006, the vast majority (85%) of men reported being job-satisfied, with no part-time/full-time gap. By 2012, a part-time penalty in job satisfaction was clearly evident: the satisfaction levels of male part-timers had dropped sharply, while full-timers’ evaluations remained more stable. 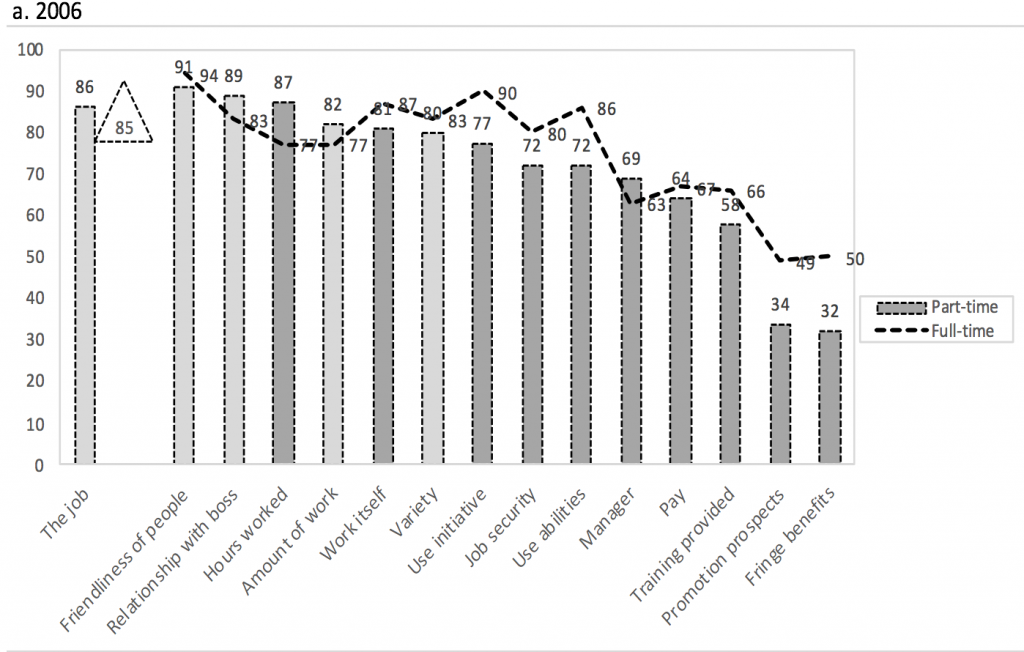 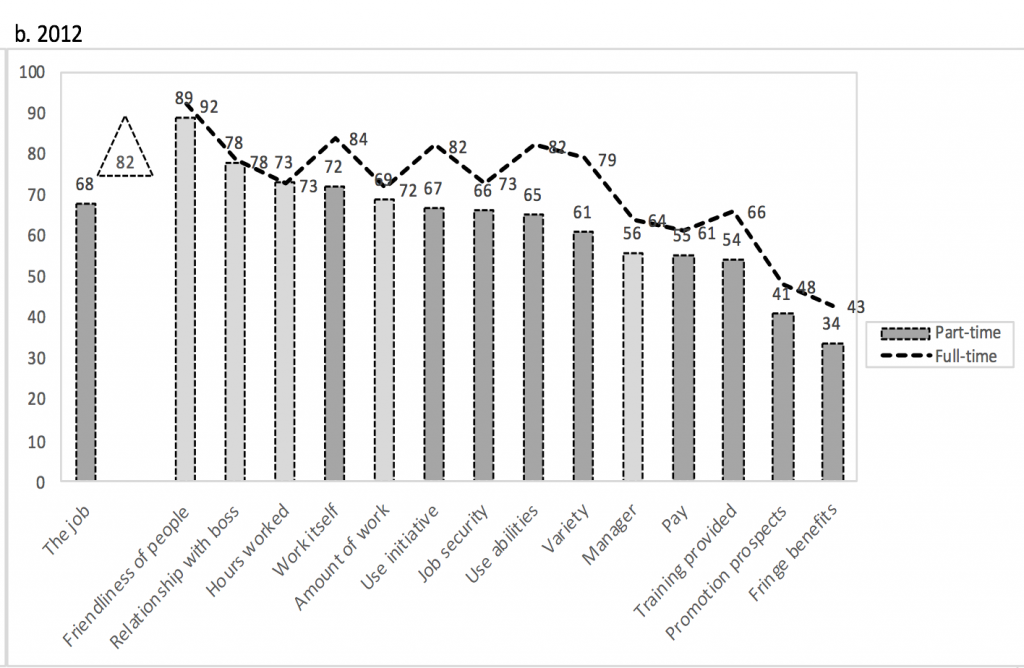 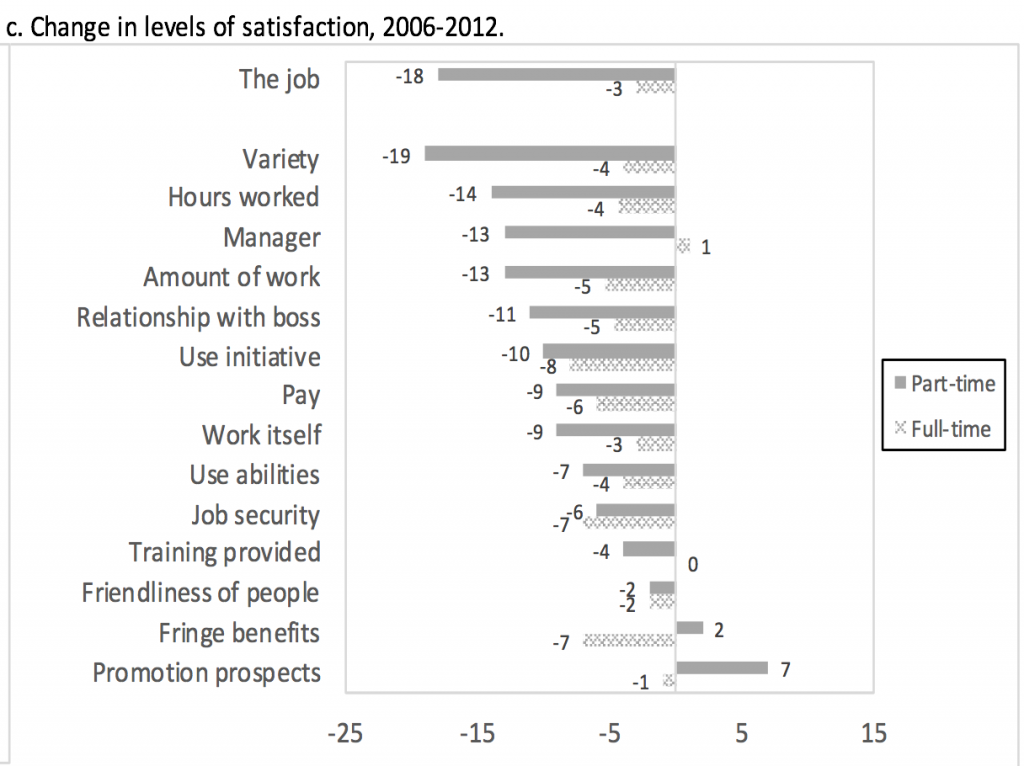 Source: authors’ analysis of the SES. Note: the light coloured columns in Figures a and b signal that the full-time/part-time gaps are not statistically significant.

Class inequalities and the part-time penalty

Is class also an important factor in understanding male part-time employment? Our previous research into female part-timers has shown over many years that there are large and significant class differences among women in whether, how and why they work part-time, and the conditions of their jobs. In addition, we know that many of the economic changes which are affecting men’s working lives (e.g. the loss of secure full-time jobs in traditionally male-dominated industries) are structured along class lines.

Our new research into male part-time workers shows that while they experienced low and weakening job quality, on aggregate compared with full-timers, provocative differences emerge when the part-time penalty is broken down by occupational class. For example, male part-timers were over-concentrated in lower-level occupations in 2006, with the recession years seeing a heavier concentration still. In addition, the steepest post-recessionary increases in involuntary part-time working were among those male part-timers employed in working class jobs, while part-timers at managerial and professional levels were shielded from such adverse change (Figure 4).

Figure 4: Percentage of male part-timers who could not find a full-time job, by occupation.

Working class male part-timers were also the most disadvantaged part-time workers on most of the components of job quality examined and, starting from a very low base, they preserved their overall ‘lead’ in bad job quality into 2012. Finally, job satisfaction fell substantially between 2006 and 2012 for men in working class occupations while, once again, senior part-timers fared far better (Figure 5).

Our new research demonstrates the problematic nature of male part-time jobs in the UK, deepening over the period of recession, with men in working-class jobs taking the greatest hits in job quality and job satisfaction.

The potentially positive development of men voluntarily seeking shorter working hours in good jobs, with progressive repercussions for greater gender equality at work and within the home, appears to be a mere pipe dream. In reality, more men entered low quality part-time jobs because they were struggling to find suitable full-time opportunities in a tightening labour market. The implications for this development include intensifying class inequalities in the UK and negative impacts for families already struggling to keep afloat.

Note: the above draws on the authors’ published work in The British Journal of Sociology.

Tracey Warren is Professor of Sociology at the University of Nottingham.

Clare Lyonette is Professor in the Institute for Employment Research at the University of Warwick.

All articles posted on this blog give the views of the author(s), and not the position of LSE British Politics and Policy, nor of the London School of Economics and Political Science. Featured image credit: by sol on Unsplash.