Discussion of work-life balance is everywhere. It features routinely in media, policy and academic dialogues. Despite its prominence, Tracey Warren explains how the debate has been largely formed around the problems of the middle class, which portray work-life balance as a question of time. She explains that in order to have a more accurate debate, the financial worries of the working class must also be considered.

The notion of work-life balance has been criticised by many researchers. It clearly over-simplifies and misrepresents the ways that work, in all its forms, fits with the rest of our lives. Yet work-life balance still remains very popular in academic studies, and discussion is widespread in corporate publicity and amongst campaigning organisations as well.

Time is pivotal to all of these debates. The charity ‘Working Families’, for example, celebrates a ‘National Work Life Week’ every September, which is when it also publicises the ‘Go Home on Time Day’. The Trades Union Congress’ ‘Work your Proper Hours Day’ also places ‘balance’ up front in its campaign against long working weeks and especially against unpaid overtime hours.

Work-life balance is a key topic in the study of working lives. Yet ‘imbalance’ is largely portrayed as a middle-class problem. In a forthcoming article, I argue that this is because middle – not working – class troubles shape academic discussions around what ‘imbalance’ means and how best to ease it. Work-life imbalance is mostly understood in a very specific way that privileges the interests of middle-class workers and their families. The lives of many middle-class families are known to be time-poor, time-squeezed or time-rushed. Because of multiple competing demands from, perhaps, two sets of full-time careers in mixed-sex middle-class couples, as well as from home and leisure lives, time is the main element that is missing from their work-life equations.

Meanwhile, headlines in the UK report how food banks providing basic essentials are being overwhelmed by the demand for their services, that job centres have been directing their clients to these charities for emergency food supplies, and that more and more low income households have turned to loan sharks to be able to afford to pay for Christmas celebrations. In this context, it is hard to have much sympathy with the study of work-life balance when its focus is largely on those middle-class workers who report being time-squeezed.

The very heavy focus on time in discussions around work-life balance has meant that the types of imbalance that are more likely to impact the working class have been neglected. In particular, financial hardship is rarely discussed as a ‘work-life’ matter.

Everyday accounts of working-class lives have long been saturated with reports of acute financial difficulties and/or fears. Finances are crucial for understanding working-class everyday lives and so, we might presume, for how paid work fits with the ‘rest of life’. But finances do not stand out much in debates that are badged under a ‘work-life’ heading: financial security has been disregarded in many studies of everyday work-lives. The limitations of a heavy focus on time-squeezed middle-class workers in the study of work-life balance were brought into sharp relief after the recession hit. The contemporary background to our work-lives has been one of deepening economic inequalities.

None of this is to deny that spending very long hours in work can be highly problematic for work-lives. ‘Too many’ hours have been identified, rightly, as a work-life problem because workers can be left with ‘too little’ time to dedicate to other areas of their lives, whether to their families, friends or communities.

So time is important. We know that workers at the top and bottom of the occupational hierarchy in the UK are those most likely to spend very long weeks in labour market work. There was a slight drop in the prevalence of very long working weeks after the crisis hit. This was particularly noticeable for male manual workers in personal, protective and elementary jobs. At the same time, these occupations saw a corresponding sharp rise in workers with part-time hours but who wanted to work more hours.

Is working ‘too few’ hours also a genuine work-life concern? Wanting to work more hours leads to a financial rather than a time-squeezed ‘imbalance’. This is particularly the case for working-class employees who are more likely to be low-waged and hourly-paid and hence need to secure enough hours to earn a living wage. ‘Too few’ hours that translate into ‘too low’ a wage can result in severely economically precarious lives. This type of imbalance has been neglected in work-life debates.

In my article, I show that using a more holistic understanding of imbalance, and using additional measures of it, reveals a quite different picture of class inequality in work-life imbalance in the UK. Analysing data from the British Household Panel Survey and Understanding Society, the article shows which workers might be seen as imbalanced in their work-lives: whether because of time problems, financial problems, or both, and it explores how this varies by occupational class. The results show that it is being financially-imbalanced (not time-imbalanced) that is most closely associated with lower levels of life satisfaction even though middle-class concerns with time and its squeeze still dominate our understanding of ‘work-lives’.

It is imperative that the study of work-lives recognises the impact of financial hardship. There are real class inequalities in financial hardship in the UK. These have grown over time. And, vitally, the hardship-gap has widened between the working and middle-classes. Figure 1 shows that the employees most likely to report financial problems as the crisis rolled out were working in elementary, plant/machine, personal/protective, sales and craft/related occupations (using ‘standard occupational classifications’).

Figure 1. Employees (aged 18-64) reporting ‘financial difficulties/just about getting by’*, by occupation. Sorted most difficulties to least in 2010–11 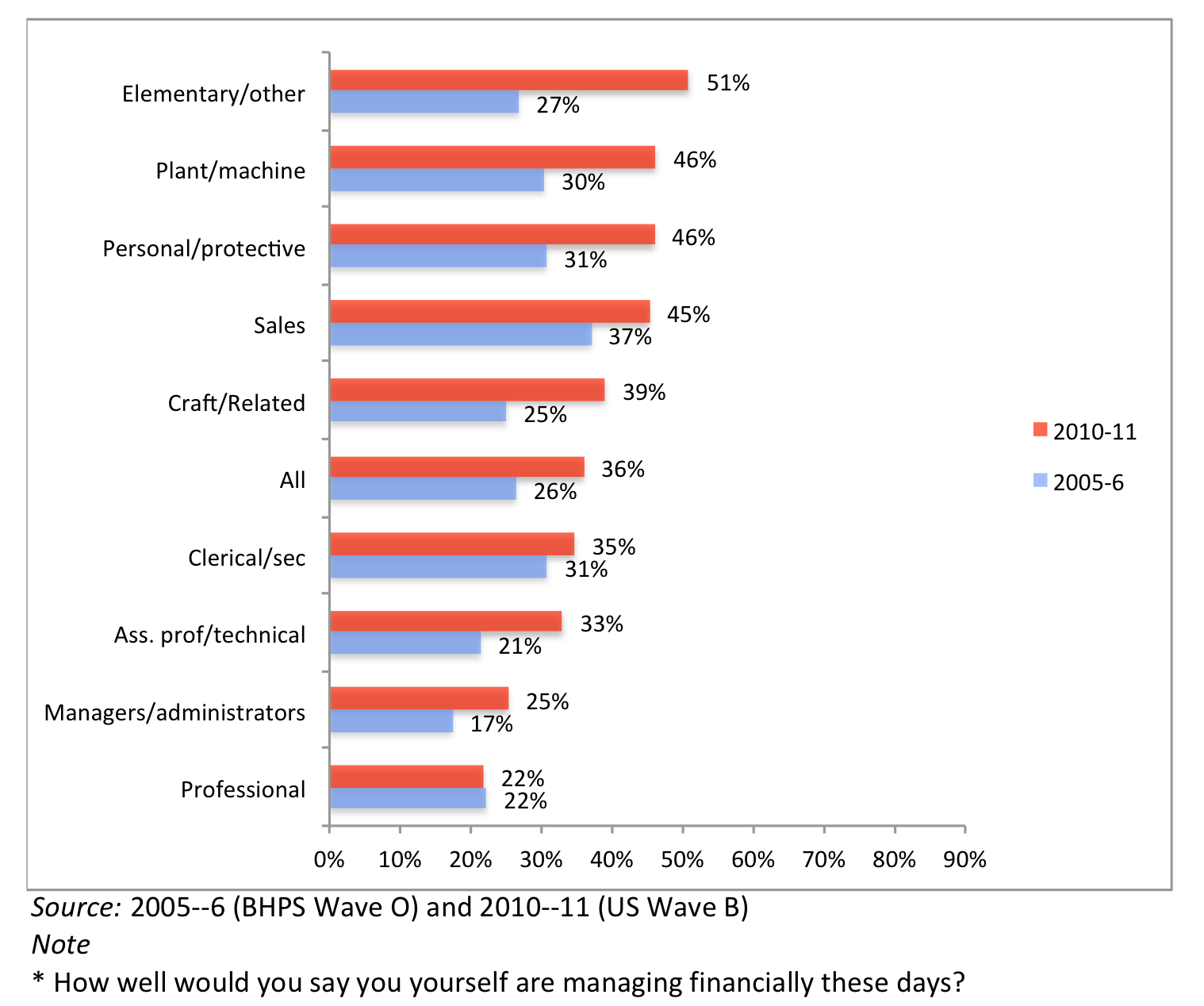 Ultimately, if ‘work-life im/balance’ were to be understood as about more than just the problems of time-squeezed middle-class workers and their families, then ‘work-life’ could become a more inclusive framework for the analysis of everyday working lives. If this were achieved, then policies under the work-life umbrella could also include those initiatives that target financial wellbeing, rather than only family-job juggling as is the case currently. Crucial examples here are minimum and living wage guarantees and minimum income standards campaigns that, in establishing a floor, can ease financial-based work-life imbalance, especially for those in the working-class. In the context of a severe and sustained economic crisis, if the work-life framework can neither tap into the deep class inequalities in financial insecurity nor shape policies to ease financially-rooted work-life imbalance, it will be obsolete.

Note: a longer version of this article has been published in The British Journal of Sociology. The above represents the views of the author and not those of the British Politics and Policy blog nor the LSE. Please read our comments policy before posting.

Tracey Warren is Professor of Sociology at the University of Nottingham