British education has faced an unprecedented situation since late March, and schools have been on the frontline. The sudden transition of the entire school system to a remote learning model is remarkable. Carl Cullinane writes that while it is inevitable in such a context that some will fare better than others, it is vital to understand how existing inequalities interact with the impacts of the pandemic.

On Sunday 19 April, the launch of the Oak National Academy was announced. An ‘online classroom’ and resource hub, it was created and developed by a consortium of teachers in partnership with the Department for Education in a matter of weeks. It is a testament to dedication and ingenuity in the sector, and has the potential to have a significant positive impact during the Covid-19 health crisis. But why was it needed?

Analysis by the Sutton Trust of the impacts of Covid-19 across the educational sector has highlighted the problem of inequalities in access to educational support in the home caused by the school closures. New data collected from parents and teachers across the country paints a detailed picture of what has been a tumultuous four weeks for British schools.

Put simply, in education, as in many other walks of life, the Covid-19 health crisis has exacerbated and highlighted existing inequalities. Inequality in the financial resources available to schools in adapting extremely quickly to a totally new model of teaching and learning. And also inequality in the support available to pupils in their home, as financial resources, in the midst of an economic as well as health crisis, are stretched. Parents across the country are being forced into what for many is a new role of primary educator for their child, while also continuing to work themselves, or dealing with the consequences of being laid off or furloughed.

This is an extremely challenging environment for learning by any standard. For many homes, and indeed for many schools in the poorest areas, it is natural that the first priority is providing food for children. Huge efforts are being made by schools across the country in this regard, and in the transition to home learning in general. However, as our new data shows, the challenges of this transition do not fall equally.

Many schools, particularly private schools, already had access to online learning portals, which could be easily adapted for online learning, including hosting online classes, and monitoring the submission of schoolwork. However, while 60% of private schools, and 37% of state schools in the most affluent areas had such portals, this was just 23% for schools in the most deprived areas. When schools shut down on 23 March, not every school began at the same starting line. This inevitably has impacts. In the first week of home schooling, pupils from middle class homes were twice as likely to be taking part in daily live or recorded lessons as those from working class households (30% compared to 16%). At private schools, 51% of primary pupils, and 57% of secondary pupils were doing so. 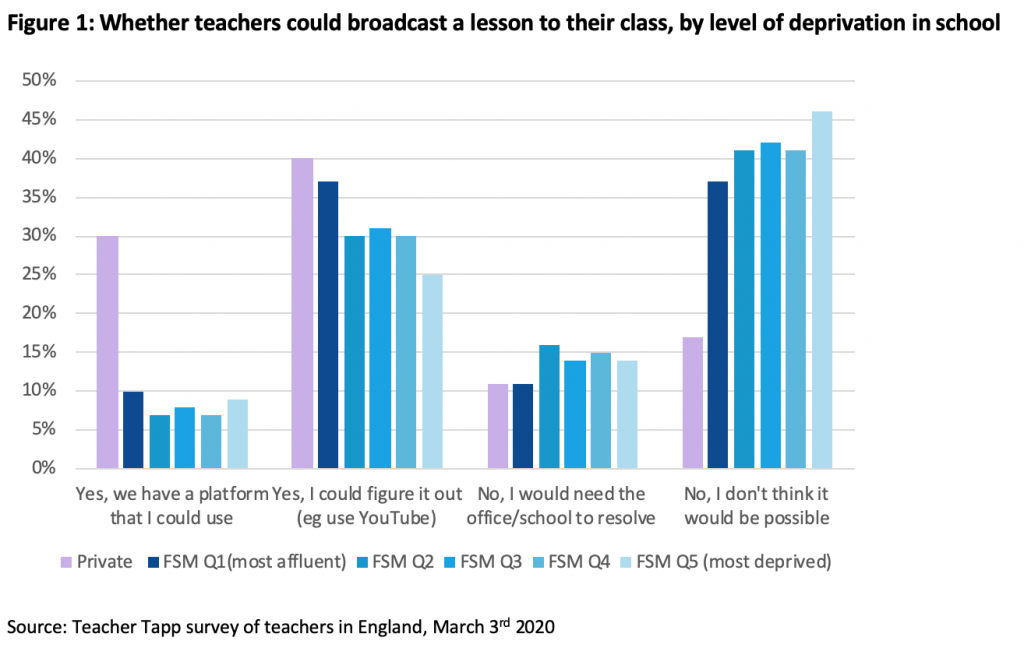 The launch of Oak National could be a gamechanger for many schools without the facilities, resources, or time to put together an online learning environment from scratch. Schools are already doing a huge amount, but this additional support has the potential to be invaluable. However, access to online learning requires several conditions; a school with the means to supply content, and a student with the facilities to access and benefit from it. Teacher Tapp’s polling of teachers showed that in the most deprived schools, 15% of teachers reported that more than a third of their students would not have access to an adequate device for learning from home, and 12% reported the same for internet access. While 21% reported that they were providing pupils with devices, this was lowest in the most deprived schools, where need is highest. 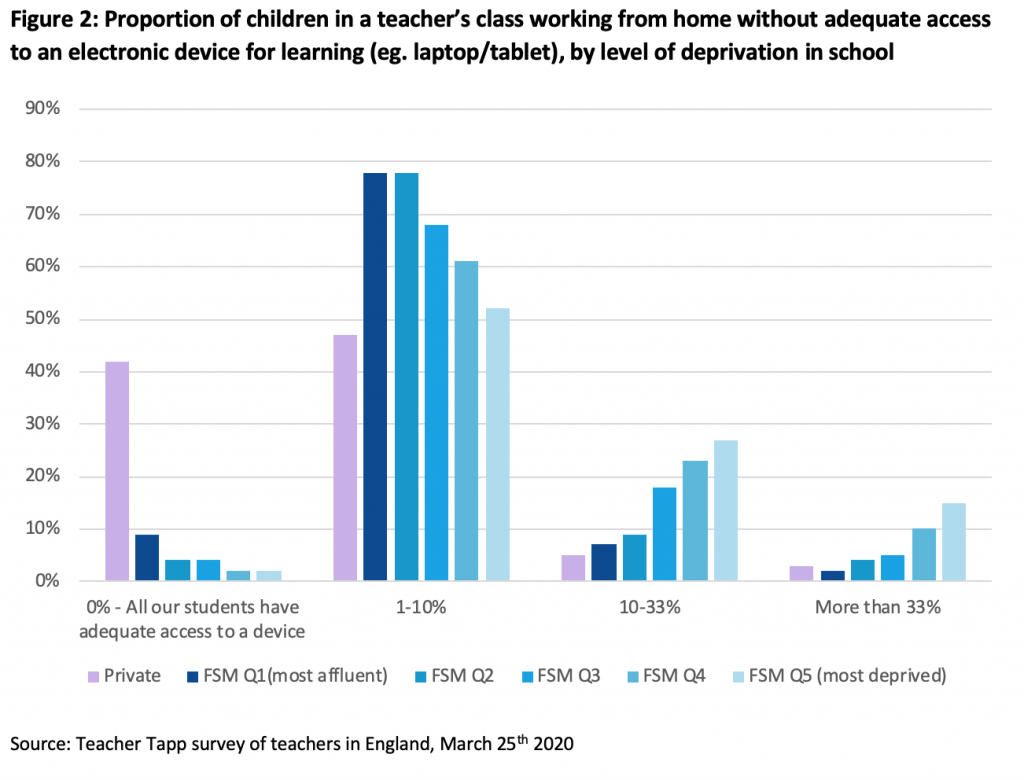 This is why Secretary of State Gavin Williamson’s announcement of laptops and 4G routers for vulnerable or disadvantaged learners was a vital companion to the launch of the Oak Academy. However, there are some details of the scheme that remain unclear, and while it is right that Year 10 pupils with exams next year are prioritised, disadvantaged pupils across all year groups should also be allowed to benefit from the scheme.

The announcements are a welcome first step, but there remains much to do to ensure this generation of pupils do not suffer in the long term. Data from late April provides sobering context for the work ahead, revealing that while 50% of teachers in private schools are receiving more than three-quarters of the work they set back from pupils, this is 27% at the most advantaged state schools, and just 8% in the least advantaged. Disadvantaged schools are also much more likely to report that the work being received has dropped significantly in quality since the shutdown (15% v 6%). 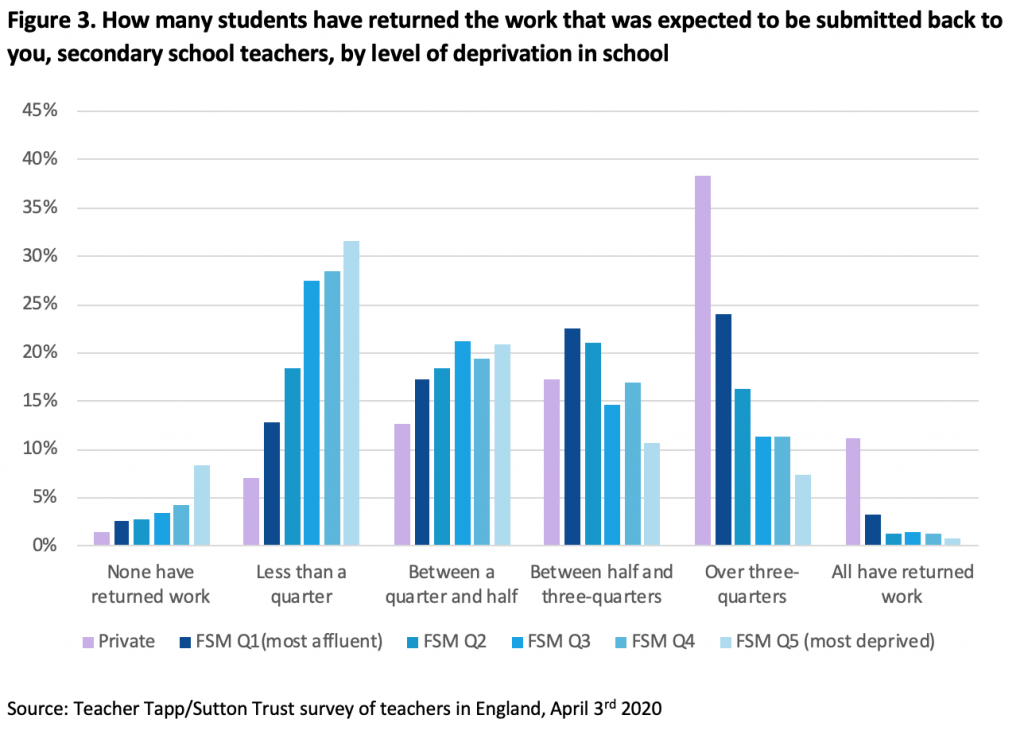 These figures serve to emphasise what is at stake in the next few months to prevent the gaps we see in school widening even further. But the announcements, along with the evidence of what schools are already doing for their most vulnerable students (providing food and tech devices, supporting parents), show there is the will. With the implementation of other recommendations around access to online learning, a new push to provide individualised high quality online tuition for those who need it most, and the potential for introducing ‘catch up classes’ for disadvantaged learners before and during the reopening of schools, then we are also already closer to identifying the way.

All articles posted on this blog give the views of the author(s), and not the position of LSE British Politics and Policy, nor of the London School of Economics and Political Science. Featured image credit: Amanda Jones on Unsplash.