If it were possible to predict property price effects during the planning stage of a transport project, the revenues of such schemes could be taken into account in the financing scheme. Gabriel Ahlfeldt has constructed such a tool, which may help to realise some projects that are needed but seem unaffordable.

In a recent paper forthcoming in Environment and Planning A, I have demonstrated that it is possible to predict local property price effects of new transport infrastructures using established urban economics approaches. I have also argued that such predictions can help improve planning. Property price effects reflect the valuation of location by residents and as such provide an additional source of valuation that can complement traditional cost-benefit analyses. Perhaps more importantly, I believe that this approach allows forecasting potential sources of revenues that could contribute the infrastructure funding. Here is how my argument works:

It is uncontroversial that good transport infrastructure is essential for the functioning of cities. Improvements in the urban transport system are typically associated with large benefits. As an example, a new transit line can reduce travel times between various pairs of locations and free up commuting time for which there is better use – be it for work or leisure. Moreover, the additional capacities may reduce congestion and increase the comfort of journeys not only along new sections, but along the entire network.

Obviously, the areas close to new infrastructure benefit the most. There is plenty of evidence that the opening of new metrorail stations significantly increases property prices in the adjoining neighbourhood. This is because buyers value the infrastructure and, all else being equal, are willing to pay higher prices. Owners of properties that receive a better connection to a transport network, thus, not only benefit from improved access to transport services, but also from an increase in the value of their typically largest asset: their property.

But where there are winners, there are typically also losers. For one thing, regional and local transport projects are often financed, at least in part, using national funds. This implies that money from taxpayers is used even though they will have little or no benefit from the local infrastructure. Also, whilst renters on the private rental market benefit from new transport opportunities, at the same time they suffer from increases in market rent. If the increase in market rent is driven by renters with a higher willingness to pay for proximity to a rail station, the associated rent increase will more than compensate the renter tenant for the increase in accessibility. The true beneficiary, obviously, is the local landlord who cashes in on the higher market rent.

One could argue that these imbalances call for an adjustment mechanism that reduces the fraction of tax money coming from taxpayers who hardly benefit from a project and instead charges those who benefit the most: local landlords. To be fair to owner-occupiers who haven’t voted for a new rail station, such compensations could be levied when properties are sold, which is when the asset gain materializes. The methods to empirically separate property price effects of transport infrastructure improvements from other factors that affect property prices are, by now, established tool-sets in urban economics. Also, the idea to charge local landlords for wealth increases that result publicly financed programmes is not new. As an example, in German urban renewal areas landlords are taxed for the increase in land value caused by public money spent on local improvements in infrastructure and building maintenance.

My point is that we can take the whole argument about property price effects and compensations one step further. If it were possible to predict such property price effects during the planning stage of, say, a transport project, the revenues of such schemes could be taken into account in the financing scheme. In times of notoriously scarce public funds, such extra revenues could make a difference when socially desirable projects are at the margin of being financially viable.

Predicting such property price effects, however, is not exactly straightforward. Take, again, the example of an addition of a new line to an existing metrorail network. Clearly, prices don’t go up mechanically around new stations, but the effects depend on where a new station is located within the network, the availability of existing nearby stations and the attractiveness of alternative transport modes. On top of that, prices also tend to rise along the existing network if the new line leads to new interchange opportunities. The theoretically attractive feature of the model I have proposed is that it deals with all of these challenges. To test how well the model does in predicting price effects in practice, I’ve run a simulation for the 1999 extension of the London Underground and Dockland Light Railway network (see Figure 1) and compared the predictions to the actual price changes. The encouraging result was that prices, on average across all affected locations, adjusted almost one to one to the predictions. 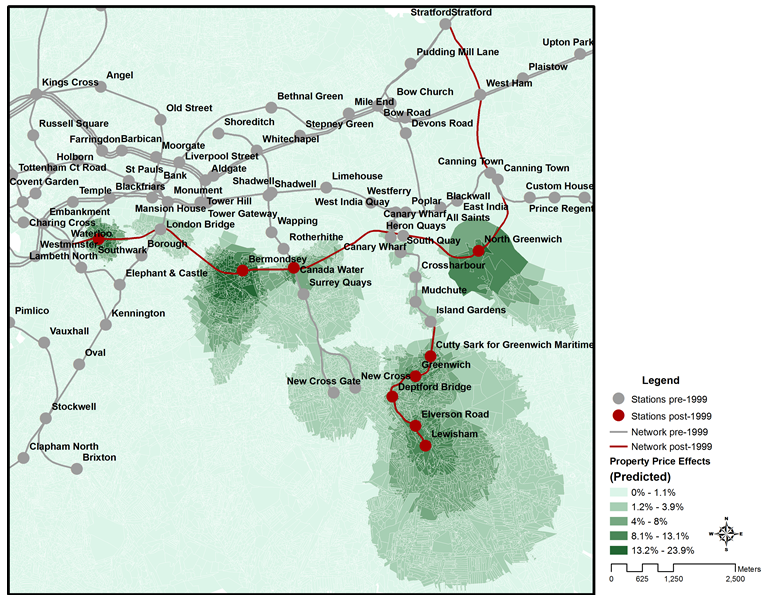 Coming back to the idea of using compensations from benefiting landlords to fund ambitious transport projects: Would the amount that could have been levied from landlords have amounted to a substantial contribution to the London underground and DLR extension in question? Well, the total predicted impact in 1999 prices was £716 million. While this would not have been enough to fully fund the £3.5 billion project it is important to note that this figure is for residential property only. Moreover, it not only excludes increases in value of non-residential properties, but also increased revenues from property tax. Still the amount seems far from negligible.

My conclusion is that some projects that are needed but difficult to realise may not turn out to be as unaffordable as they initially seem once the wealth effects to local landlords are taken into account. I have proposed a tool that allows predicting property price effects during the planning stage. In light of the undisputed benefits transport infrastructures bring to neighbourhoods and cities I argue that it is at least worth considering the potential for contributions by landlords before dismissing a project due to lack of funds.

Dr. Gabriel Ahlfeldt joined the Department of Geography and Environment in October 2009 as a Lecturer in Urban Economics and Land Development. Dr. Ahlfeldt is an Affiliate of the Spatial Economics Research Centre (SERC) and an associate of the Centre for Metropolitan Studies, Berlin. His research concentrates on the effect of large transport projects and architectural developments on local house prices, local political preferences and urban structure. This article is drawn from: Ahlfeldt, G. M. (in press). If we build it, will they pay? Predicting property price effects of transport innovations. Environment and Planning A.