On the 17th October, over 20,000 people marched on Parliament Square in London. Why do people take to the streets, and does it make a difference? Interwoven issues of grievances, efficacy, identity, emotions and social embeddedness help answer why. However, there’s a gap in our understanding of when and how demonstrations affect political agendas. Here, Jacquelien van Stekelenburg identifies key mechanisms which have both direct and indirect effects on important players.

Social psychology has lots to offer the study of protest. Exploring the causes of feelings and actions – and how these are influenced by social context – helps identify a number of important factors that explain protest actions, including grievances, efficacy, identity and emotions.

In practice these factors are interlinked and have been integrated into different models of protest participation (see Simon and colleagues and Van Zomeren and colleagues). In our work we include these four and also introduce an important fifth: social embeddedness. Talking through them highlights important links between them.

At the heart of every protest are grievances, such as experience of illegitimate inequality, feelings of relative deprivation, feelings of injustice, moral indignation about some state of affairs, or a suddenly imposed grievance. Feelings of relative deprivation result from comparison of one’s situation with a standard—be it one’s past, someone else’s situation, or a cognitive standard such as equity or justice. Research suggests that feeling part of a group which you perceive as deprived is particularly important for engagement in protest.

Efficacy refers to an individual’s expectation that it is possible to alter conditions or policies through protest. Group efficacy is the belief that group-related problems can be solved by collective efforts, and political efficacy is the belief that political actions can have an impact on the political process. Studies show feelings of efficacy are highly correlated with participation in protest; people are more likely to participate in movement activities when they believe this will help to redress their grievances at affordable costs. Also group, rather than individual efficacy, better predicts protest participation.

Indeed, the more people identify with a group the more they are inclined to protest on behalf of that group. In addition to shared fate, shared emotions, and enhanced efficacy, identification with others involved generates an inner obligation to behave as a ‘good’ group member. Together these dynamics explain why group identification functions as a ‘stepping stone’ to a politicized identity.

In terms of emotional mechanisms, it is anger which is seen as the prototypical protest emotion. For those of us who have been part of protest events or watched reports on protest events in the news media, this is hardly surprising; it is hard to conceive of protest detached from anger. A relation between anger and efficacy also exists: people who perceive the in-group as strong are more likely to experience anger and desire to take action; people who perceive the in-group as weak are more likely to feel fearful and to move away from the out-group. Although anger is seen as the prototypical protest emotion, contempt, shame, sympathy and outrage have also been related to protest. Recent research has also found that pride felt after collective action is an important predictor for future participation in collective action.

Finally, the decision to take part in protest is not taken in social isolation. Social embeddedness looks at how individual grievances and feelings are transformed into group-based grievances and feelings within social networks. Networks function as a ‘socialization device’ as they enable the formation of a mobilization potential and provide or reinforce political awareness around a given protest issue. They also operate as a ‘recruitment device’ by creating a contact between the potential participant and the movement.

The effect of interaction in networks on the propensity to participate in politics is contingent on the amount of political discussion that occurs in social networks and the information that people are able to gather about politics as a result. Individuals who feel efficacious are more likely to participate in protest provided that they are embedded in social networks which offer an opportunity to discuss and learn about politics. In other words, this is where people talk politics and thus where perspectives on the socio-political world are constructed and people are mobilized for protest. 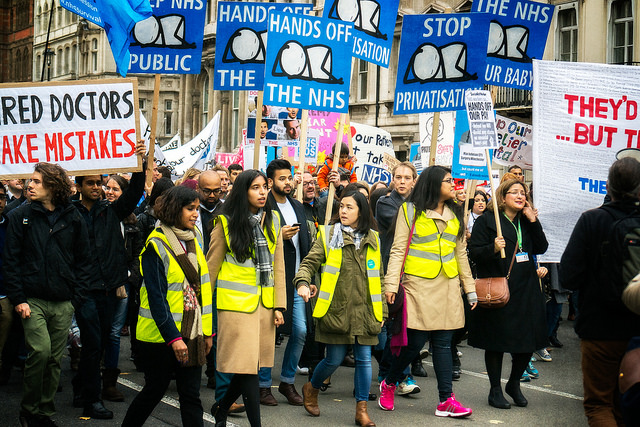 The Effects of Protest

Assessing protest outcomes is notoriously difficult. Here I focus on street demonstrations and conceptualize their political impact as the effect they have on political agendas, i.e. whether or not issue-attention increases after a demonstration. 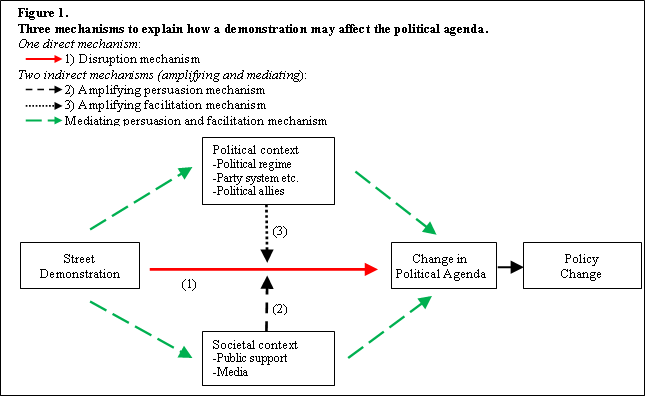 Two classical studies―Gamson (1975) and Piven & Cloward (1979)―provide empirical support to the argument that demonstrations can directly change political agendas by disruption. In an attempt to settle the issue of protest, politicians put it on the political agenda. Politicians are more inclined to do so in case of disruptive than calm demonstrations, and for large rather than small demonstrations. However, O’Keefe and Schumaker (1983) showed that violence―except when the group of protesters was large―negatively influences protest-outcomes because repression is more likely. Hence, evidence from the disruption mechanism is inconclusive.

Political opportunities indirectly facilitate protest mobilization and enhance their chance of success. The basic idea is that demonstrations influence the political agenda if they take place under favorable political circumstances, defined through the presence of four factors: a democratic regime, a programmatic party system, a polity open to the challenger’s’ claims, and political allies’ support. While the first two factors are necessary for any change in political agendas, protest size and violence can compensate the absence of sympathetic political allies.

Demonstrations are moments of communication and messages are simultaneously communicated to politicians and the general public. Demonstrations press politicians to get demands met and sensitize the population to the cause and so the media are therefore crucial in the context of the persuasion mechanism.

Political allies are usually equated with politicians who have the closest policy-preferences to the protest-claims. Demonstrations exert an indirect impact on policy change by obtaining allies who are in the position of implementing demands. Giugni assumes that the role of political allies differs across political circumstances and issues and empirical studies have demonstrated inconclusive results.

Media play a significant role in mediating and amplifying the impact of protest but rather than viewing media as passive relays, we should conceive of media as active actors covering, framing and interpreting issues and protest events . Media, political actors and public opinion form a tight reciprocal system in which media act as amplifiers. That is to say, they make big demonstrations look ‘bigger’ and grim demonstrations look ‘grimmer’. The amplified images in their turn impact on political and public agendas.

In conclusion, studies on outcome-mechanisms are inconclusive and incomplete. To fully understand when and how demonstrations affect political agendas, mechanisms that account for change must be analyzed: (1) Which mechanisms prevail when? (2) How do the mechanisms interact? and (3) When do mechanisms mediate or amplify demonstrations’ impact on political agendas? Such encompassing studies are missing, and are the vital next step in this field of research. Our next project hopes to tackle these problems by employing a unique dataset comprising data on 85 demonstrations ranging from peaceful to grim. Next to data on issue-related public opinion the dataset includes data on participants, organisers, media coverage of issue and demonstration. Only by systematically comparing across countries and issues can we understand when and how demonstrations make a difference.

Jacquelien van Stekelenburg is Head of the Sociology Department at the Vrije Universiteit Amsterdam (VU Amsterdam). 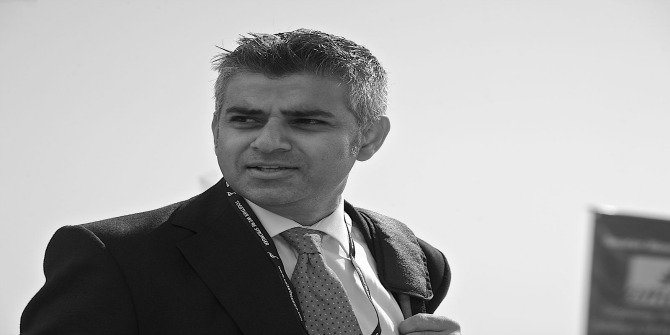 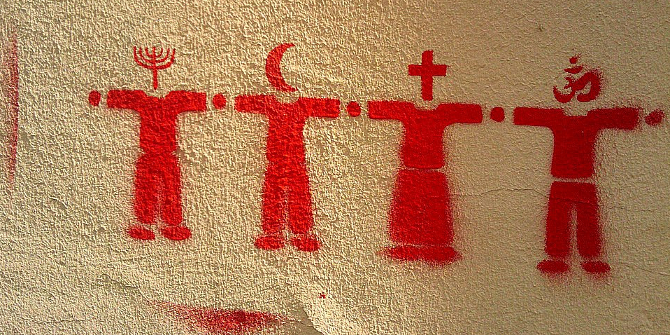 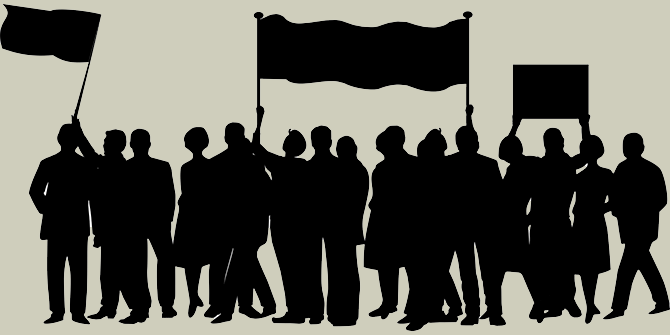