In studying discontent with politics, existing research has mostly neglected local contexts and how people perceive them. Lawrence McKay shows that both real and perceived conditions in the local community are important drivers of whether people feel their community is represented by government.

In recent years, it has become impossible to ignore the extraordinary degree of inequality between different parts of the UK. This nation is among the top-ten OECD countries for inter-region gaps in disposable income, and wealth inequalities are even more stark. Long-term processes, such as deindustrialisation, are compounded by the Great Recession – for instance, South Yorkshire’s downturn was almost as harsh as Greece’s.

In political science, it is often said that the ‘losers’ in this process have a sense that normal political representation has failed them. For instance, Diane Coyle and Rob Ford argue that political ‘alienation’ has become entrenched in ‘left behind’ areas. While this perspective has real value, I am concerned that narrative has preceded real scholarly understanding. This ‘spatial’ account requires further explanation, examination and refinement.

Two points are crucial. People actually care about their local area – they feel they belong there, they generally have ties of friendship and kinship, and they express strong interest in local issues. Previous research suggests that – just like with the national economy – most people hold central government responsible for the local economy’s success or failure, including relative to the country at large. These two points mean the local economy should matter. But how, exactly?

First, I expect that material conditions play an important role: the worse-off one’s area, the more negative their views will be. This could work through negative assessment of policy representation: the poor are generally found to be worse represented in public policy than the affluent. It could function through perceiving failures of political delivery. Or it could operate through creating a greater sense of distance from the political class, who are mostly seen working in one of the nation’s richest areas, Westminster, and are high-earners.

But this only gets us so far. What we are dealing with is inequality, and winners and losers do not exist in isolation. Further, people are driven by values and identities, rather than ‘perceptions’ alone. Both these considerations enter into my second theory. This is based on empirical research into ‘distributive justice’ – wherein people lose confidence in the system responsible when their own group is denied the benefits that others get. Furthermore, we engage in processes of ‘group justification’ – aiming to maintain a positive conception of our own communities; falling behind may cause us to seek external causes for local failure. The third test applies both principles: the perception that other places are doing better than one’s own community should damage perceptions of ‘community representation’.

To test these theories, I use 2014 data from the British Election Study Internet Panel. My dependent variable is ‘How much do you think the interests and views of people in your local community are listened to when important decisions affecting them are made by national government?’. The models below predict the probability of giving the most negative response: saying the community was ‘not at all’ listened to – ‘high discontent’.

I use two sets of questions on views of the economy, with direct parallels between local and national perceptions. The first, relating to the economy in general, asks ‘How do you think the general economic situation in [this country/your local community] has changed over the last 12 months?’. The second asks respondents to estimate unemployment rates in their community and in the country as a whole, placing a marker for each along a slider from zero to 100 percent.

I merge the individual-level data to official estimates of average weekly income in the respondent’s Lower Super Output Area (small areas of around 8,000 inhabitants on average). In all models, I control for people’s perceptions of their own economic situation, their household income, and other demographic characteristics. I also introduce a minimal set of political controls (party ID and government approval), as well as perceptions of ‘cultural’ contexts such as community diversity.

Firstly, I argued that low income communities would be most likely to believe they were poorly represented. As Figure 1 shows, this was confirmed: shifting from the best-off to the worst-off communities doubled the probability of expressing high discontent. In line with this, negative general views of the local economy – and perceptions of a higher rate of unemployment – are associated with negative views about the representation of the community. The effects are large: for views of the local economy in general, moving from the most to the least positive perception increases the predicted probability of high discontent from 0.1 to 0.4. 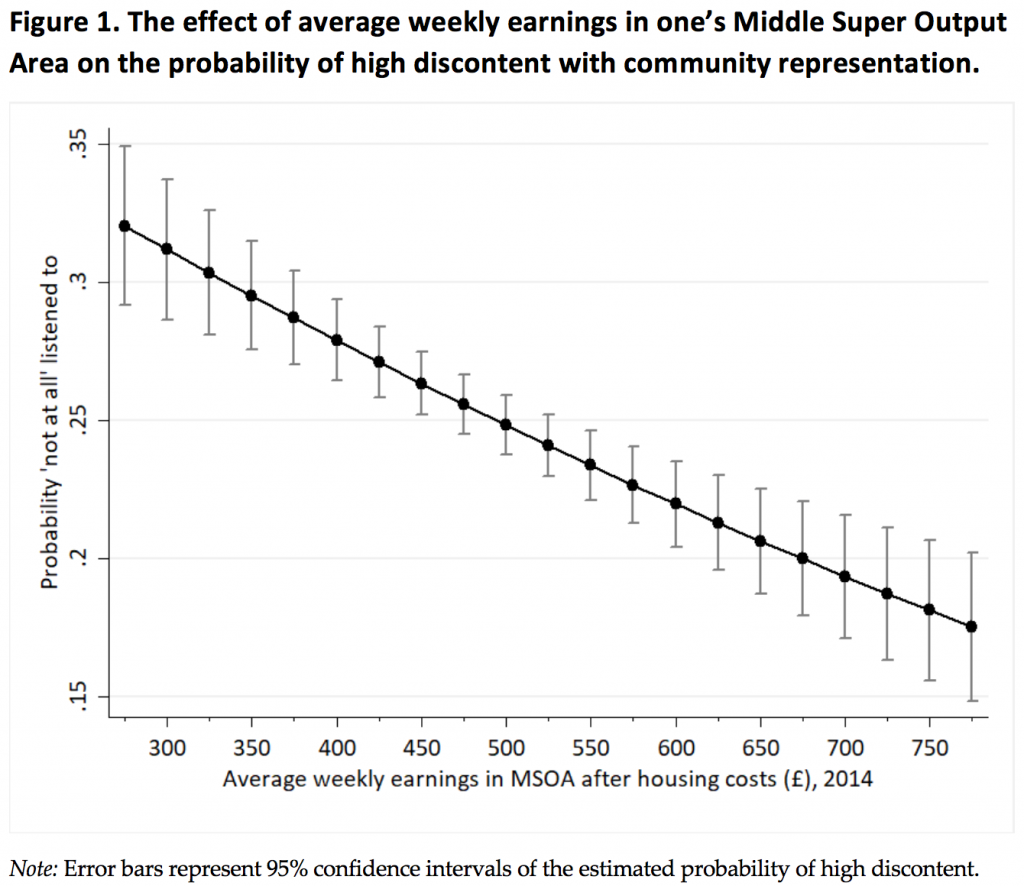 Finally, I proposed that people perceiving a good national economy but a bad local economy should be higher in discontent. While this was not borne out for economic perceptions in general, it was for unemployment (perhaps because the 0-100 scale gave a lot more leeway for respondents to draw sharp contrasts between local and national perceptions). These effects are best understood from a comparison of the slopes in Figure 2. Respondents who perceived local unemployment to be high were much more likely to evaluate community representation negatively if they thought national unemployment was low. 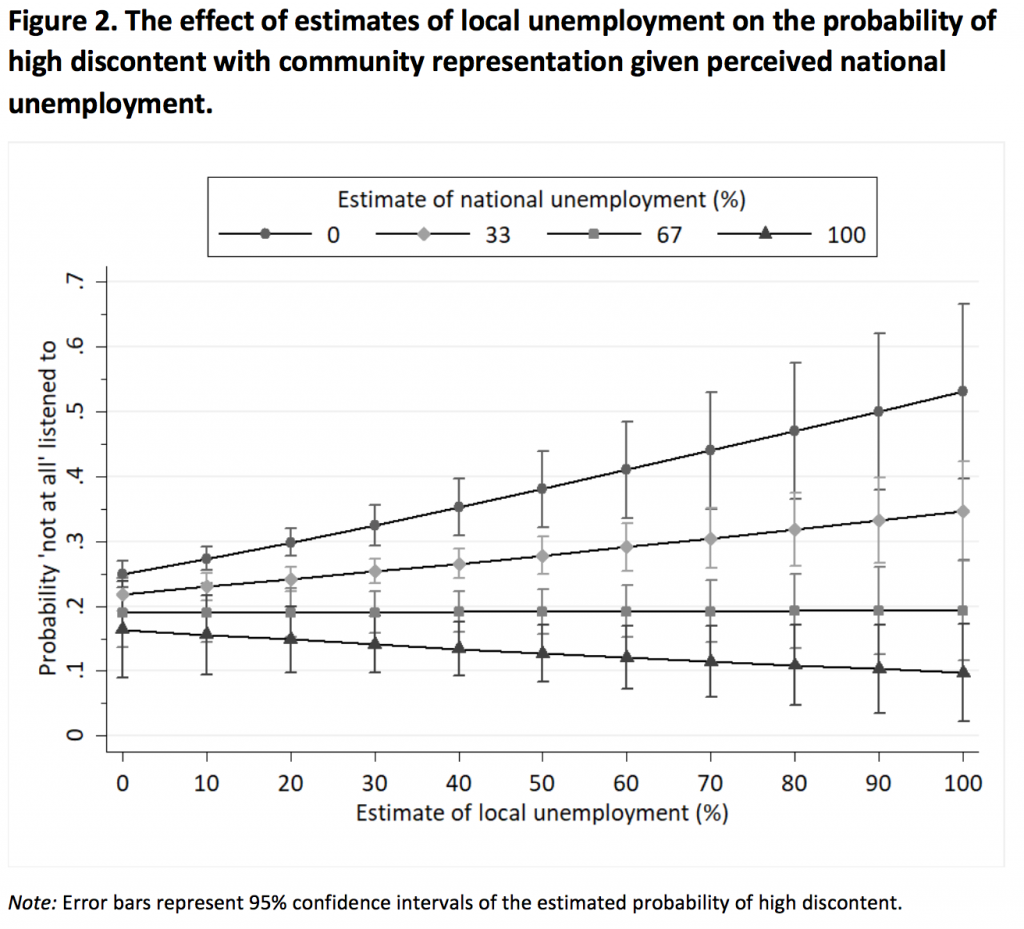 These findings bear out the basic narrative: ‘left behind’ places – in both perception and reality – tend to adopt negative views about their representation.

Future research could alter what is meant by ‘local economy’: for instance, by evaluating the importance of economic change, rather than using a snapshot of the current economy. More work will also be needed to capture ‘grievance’ effectively. People may see their area as struggling less in relation to the country and more in relation to specific centres of economic power (in particular, London).

The wider perspective offered by this paper is that these findings reflect a key dimension of the politics of inequality – that of geographic divides. Those who study democratic dissatisfaction have largely neglected this dimension. Yet attention to the geographic divides, and how the public understand them, is important to the study of questions of alienation, distrust and discontent that are central to our research, and that profoundly leave their mark on contemporary politics. 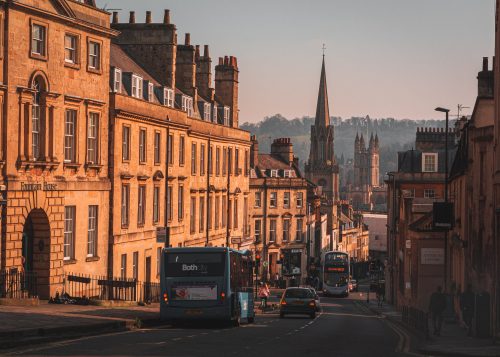