How unfair or disproportionate is the UK’s voting system for general elections?

How unfair or disproportionate is the UK’s voting system for general elections?

One possible explanation of declining voter turnout in recent UK elections, and of the movement for voters to support smaller parties, is that voters are unhappy with the unfairness or disproportionality of the British voting system at general elections. The UK has seen historically high levels of disproportionality in how votes are reflected in Parliamentary seats, as the “first past the post” method of counting votes fails to adapt to the electorate wanting to back more and more parties over time.

The general voting system (also used for local councils in England and Wales) is a very ancient and now rather primitive system, dating back to mediaeval times when techniques for counting were very crude. As many candidates as wish to can stand in 650 constituencies, mainly representing parties but with a scattering of independents. In each local area, the candidate with most votes wins. Winners do not need to get a majority of votes (i.e. 50 per cent +1) to win. They only need to get a plurality of votes – i.e. one more vote than anyone else has got. So with more and more parties contesting elections, MPs will very often be elected with far less than majority support in their area – indeed most MPs in 2005 had only 35 to 49 per cent support locally.

The system has survived so long because it favours the top two parties, who pile up most votes in their ‘safe’ areas – Labour in inner cities and industrial regions, and the Tories across the south-east and eastern England. It heavily discriminates against the Liberal Democrats and against other, smaller parties like UKIP, the Greens and the BNP, who all get appreciable levels of support across the country as a whole, but find it harder to build up a top of the poll position in particular local areas. The Liberal Democrats have begun to do better in regions like south-west England against the Tories and in some urban areas against Labour, but are still under-represented. In Scotland the SNP and in Wales Plaid Cymru have suffered less, gaining some seats in particular areas.

The main orthodox measure of unfairness is called ‘deviation from proportionality’ (the DV score)- it shows what percentage of MPs in Parliament are not entitled to be there in terms of their party’s national vote share. The lower the score, the more representative the assembly is. We have calculated DV scores for elections in the UK since 1992, and it is clearly far higher in all general elections (shown in red below) than it is in the proportional representation elections (shown in green below). 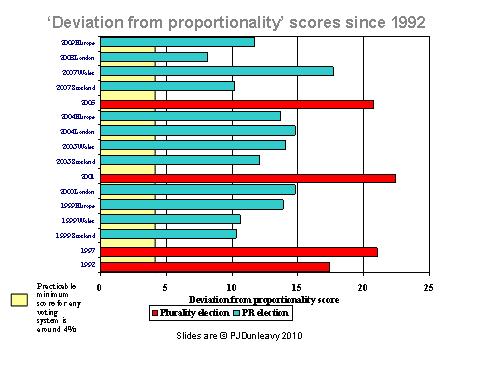 The minimum practical DV score is around 4 per cent – however, accurately any system allocates seats in relation to votes it is almost impossible to do better than this. But as you can see from the chart, the last three DV scores for UK general elections (shown in red) are more than five times this number. This pattern looks certain to repeat in 2010 – with one in every five MPs not justified in terms of their party’s national share of the vote.

What is more, British voters now know that the general election system is severely disproportional – because they have extensive experience of proportional representation systems used in the European Parliament, Scottish Parliament, Welsh Assembly and London Assembly. The Figure above shows that the most recent London and Scottish elections were around twice as fair as general elections in terms of matching parties’ seats to their overall vote shares.

A second way of looking at DV scores is to think about how fair or unfair the general election system seems to be in allocating votes at the regional level – how do voters experience the system as fair or unfair in the area where they live? Because both Tories and Labour gain from the current voting system in different parts of the country, these two biases offset each other in the national DV scores. If we look at regional level DV then we get rid of this obscuring effect and as the diagram below shows the level of unfairness that voters experience varies far more markedly. In 2005 4 out of every 10 votes in Yorkshire and Humberside and the North East region were converted into Labour seats at the expense of other parties’ representation – and DV scores in all but three regions were well above the national DV score. DV is most marked in Wales and the North where levels are typically over 35 per cent. London and the South East are somewhat better in their proportionality, but levels are still over 20 per cent. 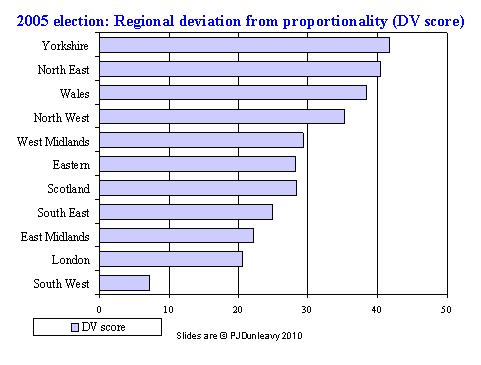 Even these regional DV numbers do not show quite how grossly unfair the UK’s system has become in an era of multi-party politics, however.  The DV score looks as if it should run to a maximum at 100 per cent – but in fact we would only get such a result if gave all the seats in Parliament to a party with no votes, which of course would not be a liberal democracy at all!

Our solution here is a much better version of the DV score which says that the limit of a country being a liberal democracy at all occurs when the largest party gets 100 per cent of all seats. In other words the maximum feasible amount of ‘false’ representation there can be is 100 per cent minus the largest party’s vote share (which it has won fairly). This measure is called “Alternative DV” (the ADV score) and it does run from 0 to 100 per cent as a good index should. What the ADV score shows is how far along a country or region is to not being a liberal democracy at all in terms of allocating seats to the ‘wrong’ party in terms of overall vote shares.

The diagram below shows the ADV scores for all regions in Great Britain, compared with the DV scores. And the picture of disproportionality painted here becomes very worrying indeed: 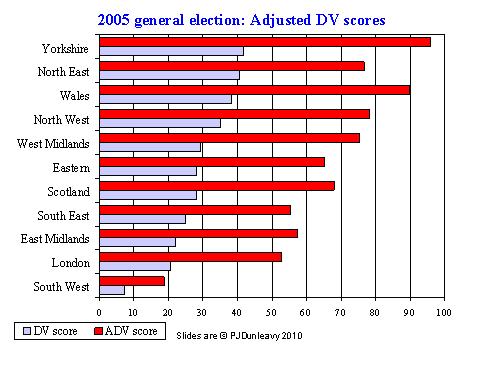 In 2005 Yorkshire and Wales were dangerously close to not being liberal democracies at all, and other areas in northern England are not very far behind them. In fact, the entire country, save for the South West had an adjusted DV score of over 50 per cent – more than half-way to not being a liberal democracy at all.

Seen this light it is perhaps unsurprising that voters are turning away from the major parties whenever they get an opportunity to vote in proportional representation elections. For instance, in 2009 (less than a year ago) the Conservatives and Labour took only 43 per cent of the vote in the European elections Parliament elections. Far fewer voters will support other parties besides the big 3 in the May 2010 general election, because they know that doing so risks ‘wasting’ their vote. But many citizens will also not turn out to vote at all, partly because they correctly identify the voting system as skewed towards artificially boosting Tory and Labour MPs representation.

The implications of this clash between an out-of-date voting system (designed only for 2-party politics) and an electorate with increasingly diverse multi-party loyalties is that electoral reform is once again on the agenda of British politics. In a report published for the British Academy this month, LSE professor Simon Hix and his co-authors argue that:

‘If a country has a multiparty system, single-member constituencies tend to lead to unrepresentative parliaments. And, if seat-shares in parliament do not correspond closely to vote-shares in the election, this usually leads to disproportional representation in government: where the party which forms the government has less than 50 per cent of the support of the electorate and, as a result, might be some distance either to the left or to the right of the average voter’.*

In 2005 Labour secured a third term in government with less than 36 per cent of the British voters backing them, that is, the positive endorsement of just 21 per cent of British citizens. All the indications so far are that the next British government in May 2010 will have an equally defective basis in popular support.

Is a British Senate any closer now? Or will the House of Lords still go on and on?