There’s been so many claims about benefits lately in the UK that it’s difficult to know where to start in responding to them. Rather than talk about Mick Philpott (about which enough has been said elsewhere) or the question of whether the social security Secretary of State can live on £53 per week, I thought I’d go back to the distant past of a week ago. You might have forgotten – is it really just a week ago? – but this is when David Cameron was tightening the rules on immigrants claiming benefits (shortly after announcements by the Deputy PM), in advance of greater freedom for Romanians and Bulgarians to come to the UK.

Rather than looking at the rights or wrongs of this approach, I was interested by whether the policy chimed with public attitudes or not. There seems to be a prevailing feeling that anti-immigrant policies are popular because people just don’t like foreigners – but what I want to argue here is that people’s views are actually more complex than this, and – perhaps – more positive.

It’s not exactly news to say that some people in Britain have concerns about migrants claiming benefits. The Ipsos MORI poll for the BBC’s 2011 Future State of Welfare asked which group should be the highest priority for having their benefits cut, and found that immigrants were top with 35%. Tom Mludzinski notes:

“an Ipsos MORI poll for the UK Border Agency from 2009 in which three in four Britons agreed that “migrants should not have full access to benefits until they become citizens, while the Transatlantic Trends series from 2011 shows that most Britons think it is very important for migrants with low education to be allowed into Britain on the condition that they do not use any social benefits.”

But to understand exactly what this means, we need to look at the ever-helpful British Social Attitudes survey (BSA), which has asked the following question:

“Think of a person who can’t find a job at the moment. Do you think there are any circumstances where it would be right to limit this person’s access to unemployment benefits?”

One of the eight possible circumstances given in this question was ‘They had not paid much in taxes because they had recently come to Britain hoping to find work here’.  Seemingly supporting Cameron’s stance, 59% of people in 2007 and 50% of people in 2009 thought that ‘it would be right to limit someone’s access to unemployment benefits’ in this situation. So far, so obvious.

What’s interesting, though, is that there was another option in BSA that got a different result. If we look at the circumstance ‘They had not paid much in taxes because they were not born in Britain, but settled here more than 2 years ago’, then the answer changed completely – only 36% in 2007 and 29% in 2009 felt it would be right to limit unemployment benefits in this case. These aren’t small numbers, but they’re a considerable way short of a majority, and strikingly different from the other question.

In other words, a large part – not all, but a large part – of the concern about migrants claiming benefits is about a lack of contribution. As we (and countless others) have said, this isn’t about payments in narrow sense, but about a broader sense of reciprocity. If you look at how people felt about other possible situations where unemployment benefits could be limited (see the chart below), there is little support for limiting benefits just because people haven’t paid much taxes lately, if the reason for this is something that’s been approved of (caring for adults or children, or because of working at a low wage).

Support for limiting unemployment benefit in each of eight different circumstances 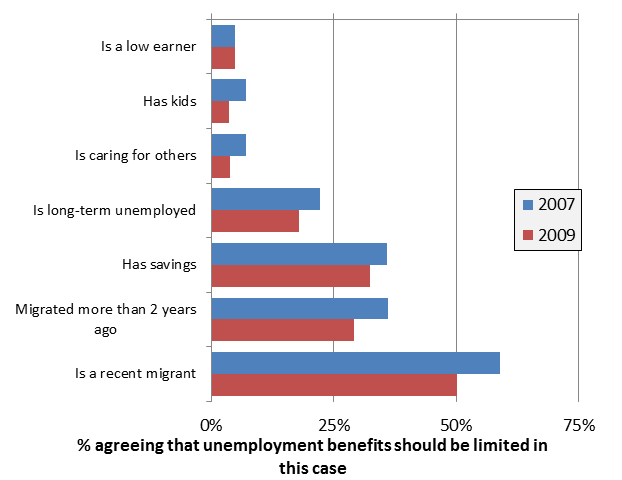 What’s more, this number goes down yet further if we look at another (and to my mind, better) version of the BSA question asked in 2004 – the question is identical, but the circumstances people are asked to respond to are different. Here we again see a majority in favour of limiting unemployment benefits for people who ‘had recently come to Britain hoping to find work here’. Yet alongside this:

This gets around the slightly strange wording in the recent question, which says that the migrants who settled more than 2yrs ago haven’t paid much taxes (which seems to imply they haven’t been working). Even this wording above is neutral on what immigrants have been doing since they arrived – my guess is that if we asked people about ‘people who were not born in Britain but settled here more than 2 years ago and have worked ever since’, even fewer people would think that unemployment benefits should be limited.

Coming back to policy, what’s really fascinating about David Cameron’s steps is how much they fit this exact picture of public support. (I’m not saying I think this is a coincidence…). Writing in the Sun, the Prime Minister said:

“We’re also going to sort out council housing. Right now, some new migrants expect taxpayers to pay for them to have somewhere to live. We’re going to bring new rules in. People shouldn’t qualify for a council house unless they’ve lived here for at least two years and can show they’re giving something back.”

There’s clearly something magical about the two-year mark. Even more explicitly, in his speech as reported by the BBC he said there were “concerns, deeply held, that some people might be able to come and take advantage of our generosity without making a proper contribution to our country”. Cameron was not banning migrants from ever claiming benefits – but he was trying to limit their entitlement to contributions within the UK.

This is not to suggest that everything in the immigration debates can be reduced to reciprocity – there’s a minority of people who don’t believe that migrants should get benefits at all, even if they’ve been in the UK for a while. And clearly there are some false beliefs about how likely migrants are to claim benefits and whether they come to the UK simply to claim them (see here and here for a way into the debates). Nor am I saying anything about whether I think the policies are sensible or not – not in this post, anyway. But I think it’s worth drawing attention to the nuance here: that anti-immigrant feeling is at least partially linked to these wider debates about ‘scrounging’ and ‘something for nothing’ rhetoric. In the end, it all comes back to deservingness.

This was originally posted on the Inequalities blog.

Ben Baumberg is co-editor of the international collaborative blog Inequalities, and a Lecturer at the University of Kent.  His interests cover a wide range of topics, including: disability, benefits, work, inequality, and the relationship between evidence and policy. You can find out more about his research/teaching at www.benbaumberg.com.