The latter change might have entailed creating a simple route for universities to shed their charitable status without the need for parliamentary or Privy Council oversight. The government still favours this option: a recent education export strategy document reads “[t]he governance structures and obligations of charities, or of bodies of similarly ancient pedigree established by Royal Charter or equivalent instruments, were not designed to grow rapidly, or to run a network across the world.”

Such moves would be difficult to undo and have never been presented openly to the public, having been tacitly incorporated into the plan to ‘diversify the supply side’ of undergraduate provision.

Great University Gamble was then reconceived as a general guide to current higher education policy, how the new market terrain was circumscribed by the undergraduate funding regime, and what this would mean for the new corporate and financial strategies pursued by individual institutions.

It is deliberately light on theory but it does offer an articulated concept of ‘privatisation’, one that is appropriate for a sector, like English higher education, where institutions are already legally private entities. Seven processes are analysed through the book. 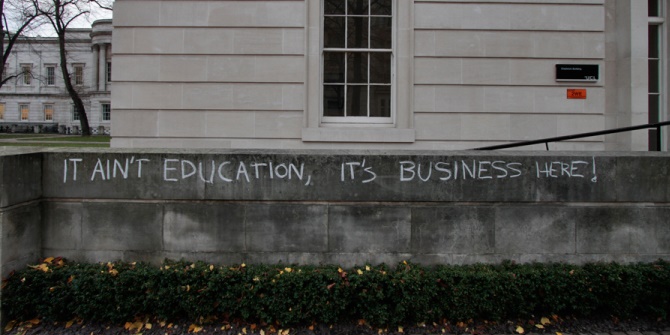 Additionally, since December 2012 there have been two or three developments which make some of the original analysis and supposition less speculative than it was at the time of writing.

Firstly, growth in the private, alternative sector has been even more rapid than I predicted. Numbers of students accessing loans and grants to study through these operators had reached 39,000 in September 2013, an astonishing increase from 5,000 in 2010. With these students are now able to access over £16000 per year in financial support, public outlay went over £300million that year, and official figures now point towards £900million in 2014/15.

Note: This article gives the views of the authors, and not the position of the British Politics and Policy blog, nor of the London School of Economics. Please read our comments policy before posting. Photo credit:  _MG_7581

Andrew McGettigan writes on philosophy, education and the arts. He runs the blog, Critical Education, which offers coverage of financial matters in higher education.