Can the euro be saved? How should the EU respond to Brexit? In an interview with editors Artemis Photiadou and Stuart Brown, Nobel Prize-winning economist and bestselling author Joseph Stiglitz discusses the structural problems at the heart of the Eurozone, why an amicable divorce may be preferable to maintaining the single currency, and how EU leaders should respond to the UK’s vote to leave the EU.

Your new book, The Euro: And its Threat to Europe, outlines the problems at the heart of the euro and their effects on European economies. Can the euro be saved?

The fundamental thesis of the book is that it is the structure of the Eurozone itself, not the actions of individual countries, which is at the root of the problem. All countries make mistakes, but the real problem is the structure of the Eurozone. A lot of people say there were policy mistakes – and there have been a lot of policy mistakes – but even the best economic minds in the world would have been incapable of making the euro work. It’s fundamentally a structural problem with the Eurozone.

So are there reforms that could make the euro work? Yes, I think there are and in my book I talk about what these reforms would be. They are not that complicated economically, after all the United States is made up of 50 diverse states and they all use the same currency so we know that you can make a currency union work. But the question is, is there political will and is there enough solidarity to make it work?

There is an argument that even if the euro was a mistake, the costs of breaking it up may be so severe that it is worth pushing for a reformed euro rather than pursuing what you call an ‘amicable divorce’. Are the benefits of a properly functioning euro worth the costs to get there?

You are right. The question of whether you should form the union is different from whether you should break it up: history matters. I think it’s pretty clear now that it was a mistake to start the euro at that time, with those institutions. There will be a cost to breaking it up, but whichever way you look at it, over the last 8 years the euro has generated enormous costs for Europe. And I think that one could manage the cost of breaking it up and that under the current course, the cost of keeping the Eurozone together probably exceeds the cost of breaking it up.

If we accept that the euro was a failure, was this primarily a political or an economic failure?

It’s clearly a political failure in the following sense: it was motivated by politics. There was no economic imperative to create the euro. It was motivated by politics, but the politics were not strong enough to finish the job. It was based on a vision of advancing the European project and the integration process. But people didn’t understand that you can’t just say what you want, you have to pay attention to economic laws and forces.

And I actually think they had the best of intentions. I think they really believed that the euro would lead to prosperity and that this prosperity would lead to more solidarity, furthering the vision they had in mind. But they ignored the economic realities of what they were proposing and the end result is what we now see in Europe.

Of course the EU is also now facing up to the challenges posed by Brexit. Some suggest that the best response the EU could pursue would be to make an example of the UK to prevent other states from leaving. Do you think this likely to be counterproductive?

Yes, I do, and the fact that people are raising that issue to me is symbolic of the problems in Europe and the EU. One would have hoped that the value of being in the EU would itself be the reason why people would want to stay. To say the only reason people will stay in the EU is because if they leave they will be punished is not a very persuasive argument for Europe and is certainly not one that is likely to generate solidarity. This situation is more like a group of inmates sharing a prison than having genuine solidarity.

The problem is that some of the main leaders in Europe, like Juncker, have taken that attitude and the fact that it’s coming from the top leadership is obviously troublesome. And this is particularly the case when you consider Juncker’s role as the architect of one of the major problems currently being faced in Europe – tax evasion – when he was Prime Minister of Luxembourg. It is supposed to be the case that globalisation works for all countries, yet Juncker demonstrated a form of globalisation that works for a small country at the expense of the rest. Clearly, he doesn’t understand what globalisation is supposed to be about.

On a similar point, one of the explanations that has been put forward for Brexit and the popularity of politicians like Donald Trump is that governments across the world have largely failed to address the concerns of those who have lost out from globalisation. Do you think that globalisation can be made to work for everybody?

Part of the issue is that in the most recent trade agreements, for instance, the societal benefits are low or even negative. I’m talking about deals like the Trans-Pacific Partnership (TPP) and the proposed Transatlantic Trade and Investment Partnership (TTIP) between the EU and the United States. These agreements are largely vehicles for corporatist agendas. They’re not about restructuring the global rules of the game to make everyone better off, they’re about altering the rules to make them more favourable for corporations.

Finally, much like countries in the Eurozone, the British government advocated a form of austerity in the UK in the aftermath of the financial crisis. Given the UK was not subject to the same structural problems as those countries using the euro, what is your view on how the country handled the crisis?

I think this illustrates a general point: that leaving the EU is not going to immunise you against bad policies. You can have bad policies in or out of the EU. My view is very strongly that austerity doesn’t work and the only reason that Britain has done as well as it has done is really because it hasn’t had as much austerity as George Osborne claimed. There was a lot of smoke and mirrors, but there was more rhetoric on austerity than complete follow through – fortunately for Britain.

Joseph Stiglitz was speaking prior to an event hosted by LSE. His new book, The Euro: And its Threat to Europe, is available here.

Joseph Stiglitz was Chief Economist at the World Bank until January 2000. He is currently University Professor of the Columbia Business School and Chair of the Management Board and Director of Graduate Summer Programs, Brooks World Poverty Institute, University of Manchester. He won the Nobel Prize for Economics in 2001 and is the best-selling author of Globalization and Its Discontents, The Roaring Nineties, Making Globalization Work, Freefall, The Price of Inequality and The Great Divide, all published by Penguin. 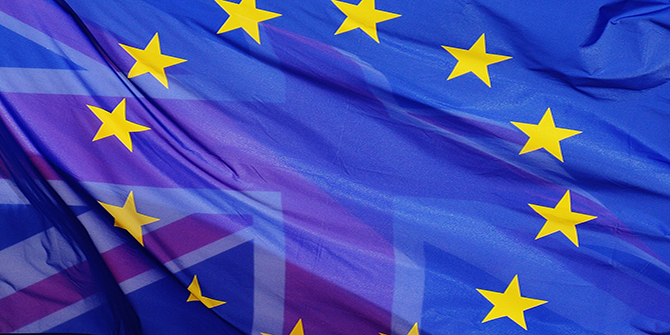