The latest episode of the four year battle between the Government and the British Medical Association (BMA) serves as stark reminder of the loneliness of ministerial office. But, argues Tony Hockley, in the end the buck really does stop with the Secretary of State. If the BMA works with the Health Secretary they could make further progress on the new contract, even after the decision on imposition. Perhaps more importantly, the BMA must now address the wider issues that face the NHS and start negotiating on next steps.

NHS Employers agreed this week that what had been negotiated was a fair new contract. They also agreed that the argument needed to be brought to an end. But it was left to the Secretary of State alone to take the decision on imposition of a new contract. The BMA has worked tirelessly to make the Health Secretary a figure of hate. This is nothing new, and once the hard decisions are taken then a fresh face will be installed in the Department of Health. The difference a reshuffle makes in public policy is always intriguing: usually a change of face, but not a change of policy. The process then begins to move forward again. It is deeply questionable who this benefits. Few health secretaries are not relieved to get a change of scene, despite a sense of unfinished business. I well recall Virginia Bottomley’s sadness to leave a job she cared deeply about, but her belief that she had certainly earned the right to move to the “Ministry of Fun”. (the Department of  National Heritage, now Culture, Media & Sport).

Now that Jeremy Hunt has taken the decision to impose a new contract, the BMA needs to think carefully about its next steps. During the debate over the contract it became abundantly clear to any observer that there was more to this than the contract, or the rate of pay for Saturday daytime work. To try to maintain the level of heat after the decision cannot help address the wider issues. The BMA won huge concessions in the dispute, and it could now enjoy these spoils and start negotiating on next steps.

No-one who has followed the episode since the BMA initially walked away from negotiations can have much faith that the union will take any olive branch it gets offered. It does seem that peacemakers tend not to prosper within the BMA election process, hence the repeated aggression. I was very aware of this whilst working with health ministers twenty years ago in a slightly surreal exchange. After settling a dispute with the doctors’ union, the BMA made it very clear to us that the traditional exchange of letters should not be addressed in first name terms (indeed, they rejected our first letter). It seemed it would be deeply damaging to a promising medico-political career should doctors discover that their leaders and the Secretary of State had built a civil relationship. 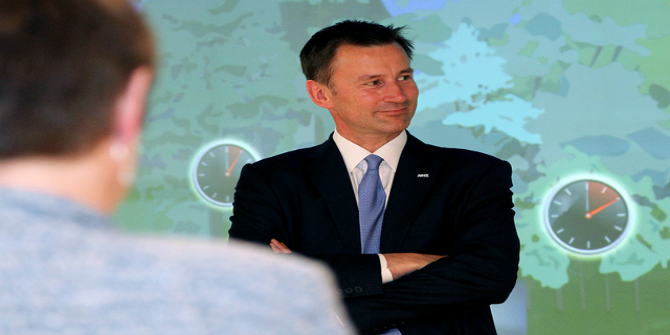 This antagonistic way of working does huge damage to the ability of the NHS to make the constant change required of any health system. Instead it lurches from battle to battle, creating alarmist headlines and huge animosity. The constant BMA cry of ‘crisis’ does nothing to support morale on the part of those who work in the NHS, or confidence amongst its users. This is a lesson that the BMA seems unwilling to learn. In 1984 its Chairman declared the “end of the NHS” in response to a Government decision to introduce a blacklist of substances which should not be paid for by the NHS; including custard cream and pasta mix. The BMA suffered some media ridicule for such posturing.

And there there was the BMA poster campaign in August 1989 personally attacking the Health Secretary, Kenneth Clarke, as someone who doesn’t follow medical advice. Even the BMA Chairman later acknowledged that this was counterproductive. But it does not stop. In June 2007, during a period of huge spending increases (and dramatic pay rises for doctors) the BMA described the NHS as “on its knees”, once again holding the Health Secretary personally culpable.

Some have compared the junior doctors’ strikes to the miners strikes of the 1980s. There is no comparison. Mining was on its knees. The National Union of Mineworkers was fighting to save a dying industry and the communities that depended almost totally upon it. In stark contrast, healthcare will continue to grow. This is reflected in the fact that the NHS is one of the few areas of public spending still receiving new investment. A far better comparison is with the battle that Ronald Reagan fought to liberalise the US air transport market in the 1980s. The sector had great potential, but could only realise it if the whole industry became efficient and innovative. In order to achieve this Reagan peremptorily fired 11,000 air traffic controllers who had gone on strike over a new contract. All Jeremy Hunt has done is introduce a contract after three years of negotiation, most of it agreed, and for doctors in training whose work is constantly changing.

The NHS is in the midst of a very tough time. It must adapt to a sustained period of spending growth that is below historic trends, and it must simultaneously undergo a substantive transformation to meet the country’s changing health needs. Vitriolic arguments over details of contracts are a hugely damaging diversion from this task.

Having pushed the medical profession into a frenzy over the contract, only the BMA can now restore relative calm. If they work with the Health Secretary they may even make further progress on the new contract, even after the decision on imposition. Having taken the decision Jeremy Hunt is well able to take the inevitable abuse that will be directed at him until he moves to another Government job. No successor will wish to re-open this debate. By the time of a summer reshuffle British politics may anyway look very different; after the May elections and probably after the European referendum. Almost certainly the buck will be on someone else’s desk.

Tony Hockley is a former adviser to Lord Owen, as Leader of the Social Democratic Party (SDP), and was Special Adviser to both Virginia Bottomley and Stephen Dorrell at the Department of Health. He teaches within the Department of Social Policy at the LSE, and is Director of the Policy Analysis Centre Ltd.