Tony Blair and Gerhard Schröder were both elected in the late 1990s. But whereas Blair’s government toughened law and order policies in the UK, the German Social Democrats did not follow suit. Georg Wenzelburger writes that the ministers involved, as well as the balance of power within each government go some way in explaining why.

It may seem unthinkable today, but social democratic parties were flourishing in many European countries in the mid-1990s. When Britain’s Tony Blair, Sweden’s Göran Perrsson, and the German Chancellor Gerhard Schröder met at European summits in Brussels, they discussed mainly with Social democratic party fellows such as the Dane Poul Nyrup Rasmussen, the Dutch Wim Kok, the Austrian Viktor Klima, or the Greek Konstantinos Simitis. Although notable variations did certainly exist between countries, a big part of this success story of European Social democrats during this time was a re-invention and repositioning of their party family as parties of the “third way”.

A particularly close relationship existed between New Labour’s Tony Blair and Germany’s Chancellor Gerhard Schröder who, in June 1999 presented a common manifesto entitled “Europe – The Third Way/Die Neue Mitte”. Whereas much has been written on the social and economic policy agenda of these third way social democrats, the programme also included a less well-known but nonetheless pronounced law and order agenda. The new slogan was “tough on crime, tough on the causes of crime” – a soundbite which Blair successfully used in the 1997 campaign and the German SPD copied, making it a headline in its 1998 manifesto.

What is puzzling, however, is that the policy output differs starkly between the two governments. If one collects and codes data on the legislation adopted by the two governments, one clearly sees a sharp tightening of law and order policies in Britain after Blair took office with landmark legislation such as the Crime and Disorder Act 1998. In stark contrast, although the Schröder government did issue some tougher terrorism legislation after 9/11, the German policy output is by no means comparable to the policy path taken in Britain (see Figure below).

Figure 1a: Adopted Bills on Law and Order in the UK 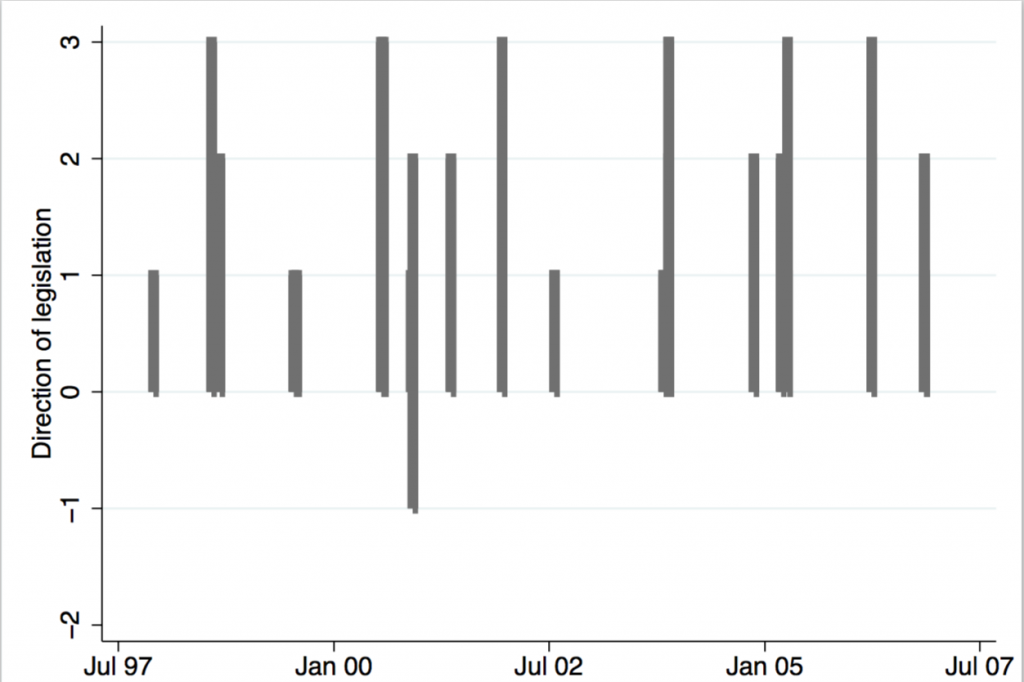 Figure 1b: Adopted Bills on Law and Order in Germany 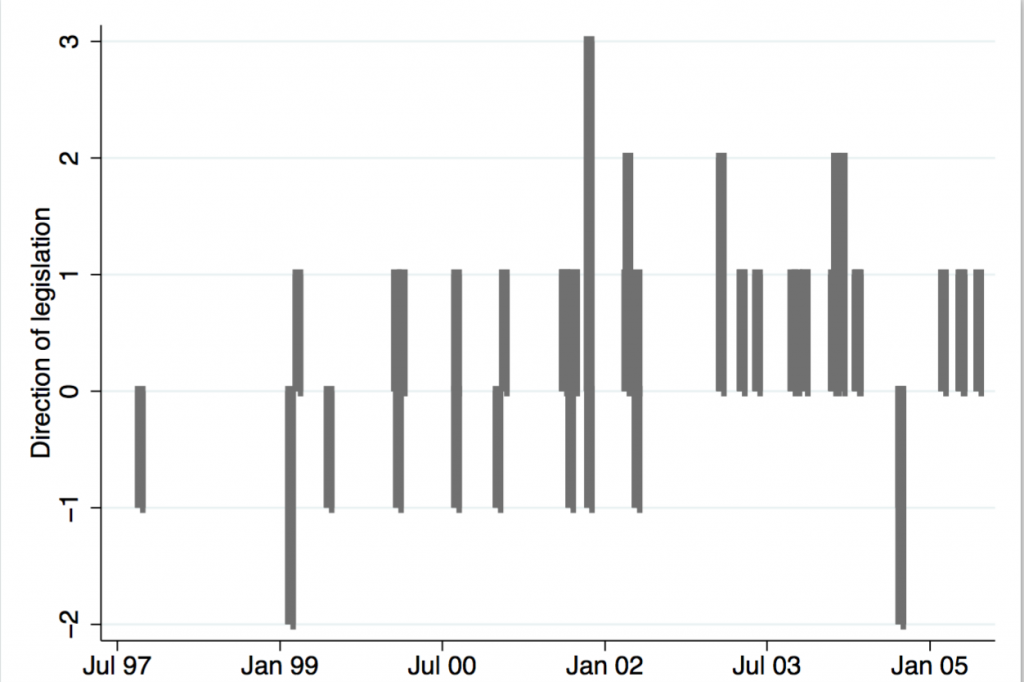 Note: The charts are based on a qualitative coding of legislation in terms of breadth (number of people concerned) and depth (profoundness of change in status quo) (cf. Wenzelburger and Staff). Positive values indicate changes in a more repressive direction (3: large, 2: medium, 1: small); negative values indicate changes in a more liberal direction (again from -3: large, to -1: small).

In a recent study, we examined this puzzle more closely. Interestingly, one of the main approaches to explaining policy outputs – partisan theory – does not seem to hold here. Although Gerhard Schröder had to deal with the Green party as junior partner in his coalition, the two most important ministries – the Ministry of the Interior and the Ministry of Justice – were held by the SPD. Moreover, evidence from elite interviews with key actors of the time suggest that the Greens were mostly concerned with environmental policy and foreign policy decisions, but not with questions of law and order. Instead, after a close tracing of the policy processes based on elite interviews and an analysis of primary and secondary sources, what emerges as the main explanation of the difference between the two countries is mainly a story of the relevance of ministries and individual ministers.

Two points stand out: first, the German system was characterised by two ministries with opposing views on law and order policies – Interior and Justice – whereas British Home Secretaries had no countervailing power in cabinet to deal with. In Germany, the Ministry of Justice repeatedly pointed to the relevance of civil rights as guaranteed by the constitution when proposals from the Interior were too far-reaching. In some cases, this dynamic effectively made legislation much less repressive. Instead, the absence of a strong Ministry of Justice in Britain meant that the Home Office set the agenda alone.

Second, personal convictions of the relevant ministers played an important role. In Germany, the first Minister of Justice in the Schröder government, Däubler-Gmelin, had a strong position within the party and represented a more liberal strand in terms of penal policies. This enabled her to stand up against pressures from the Ministry of the Interior, although Chancellor Schröder generally supported the Minister of the Interior in such cases. Encouraged by her ministerial staff, Däubler-Gmelin managed to soften some of the tougher measures that were initially proposed by the Interior. In Britain, it was David Blunkett in particular who had strong personal interest in law and order issues. Having experienced societal degradation and disorder throughout his youth, he pushed law and order issues on the agenda and proposed a series of tough bills. Moreover, Tony Blair himself was interested in a tough law and order agenda – he directly interfered and made sure that the policy path was firmly set.

Hence, our study concludes that the fact that the German social democrats mainly paid lip service to the slogan “tough on crime and the causes of crime” whereas the British New Labour governments clearly adopted a more repressive stance, can be mainly explained by the institutional structure of the governments and Ministries as well as by personal convictions of individual ministers. This result emphasizes the importance of opening up the black box of government and looking at the preferences and balance of power between individuals within governments, when explaining policy outputs – a claim that is gaining more prominence in political science.

Note: the above draws on The ‘third way’ and the politics of law and order: Explaining differences in law and order policies between Blair’s New Labour and Schröder’s SPD, published in the European Journal of Political Research (DOI: 10.1111/1475-6765.12202).

Georg Wenzelburger is Professor of Political Science at the University of Kaiserslautern.

Posted In: British and Irish Politics and Policy | Economy and Society | Fairness and Equality | Featured | Party politics and elections 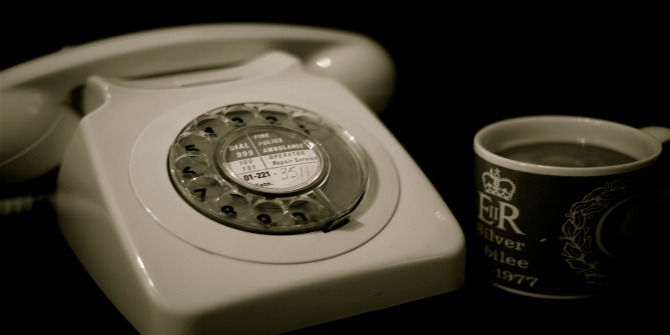