Why do politicians represent lesbian, gay, and bisexual citizens’ interests, particularly if they are not LGB themselves? Drawing on an analysis of more than 950,000 parliamentary questions in both Britain and Ireland, Lea Ewe Bönisch finds that, apart from sexual orientation, the political value of social equality and awareness of LGB interests explain such representation.

The House of Commons is the parliament with the most sexual minority members – currently, 55 MPs define as lesbian, gay, or bisexual. In contrast, while the number in the Irish Dáil has increased since 2000, it is still low. However, both parliaments debate topics addressing the interests of LGB citizens (e.g. same-sex marriage). This raises the question of who is most likely to address these issues in parliament and why.

To answer these questions, I analysed 958,305 parliamentary questions submitted for written reply in both legislatures (Ireland: 2000-2015, United Kingdom: 2005-2017). The focus was on characteristics of individual parliamentarians, their party, and their constituency. The expectation was that minority membership of the parliamentarian themselves (descriptive representation) and the political value of social equality matter for them acting in favour of sexual minorities (substantive representation). Additionally, I expected that legislators with higher awareness of sexual minorities and their interests are more likely to represent them, as awareness of a group can increase if people are in contact with members of that group. Therefore, the number of LGB members in a party, the share of same-sex households in the constituency, and LGB supporting organisations in the constituency are expected to lead to higher awareness.

Figure 1: The roots of the substantive representation of LGB interests in parliament. 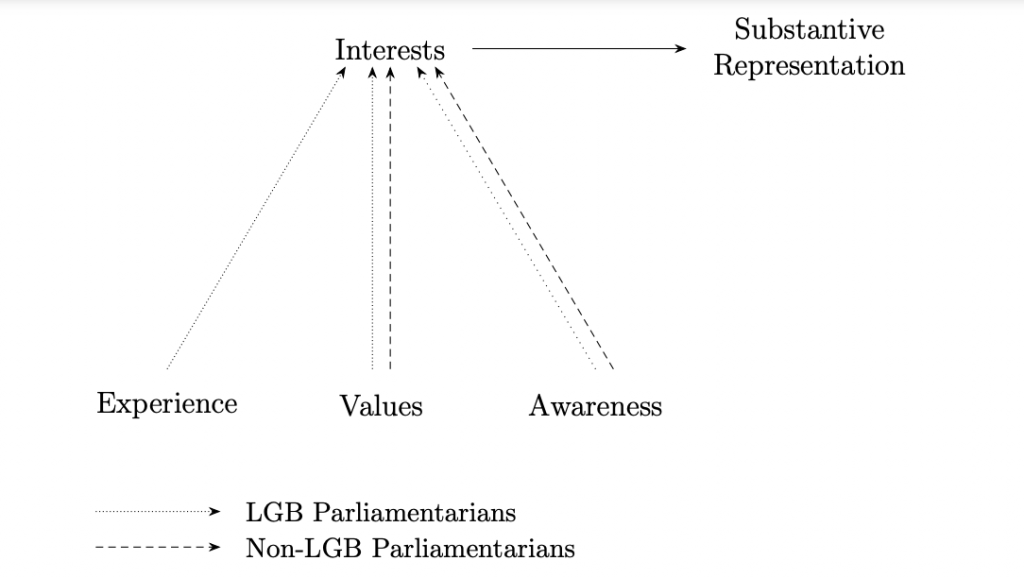 The analysis shows that sexual orientation does indeed strongly influence whether parliamentarians stand for the interests of LGB citizens or not. Minority parliamentarians table between 4.5 (UK) to almost ten times (IRL) as many questions that address LGB interests compared to those who do not publicly self-identify as such. The higher level of representation is therefore directly linked to the experiences of parliamentarians.

A closer look at the 14 parliamentarians who came out as lesbian, gay, or bisexual during the period analysed sheds light on whether the coming out itself influences representational behaviour. Nine of these had not tabled any relevant questions, independent of whether they had already come out. Four of the five remaining members have been more active since publicly self-identifying as LGB. This shows that if the coming out has an influence, it is a positive one.

Even though the probability of tabling questions concerning LGB interests is higher for minority members, the most active parliamentarians are not LGB. This indicates that factors other than sexual orientation are at play, too. The more important the value of social equality is to the person, the more likely they are to represent the interests of LGB citizens. Thus, favouring equality in general leads to an increased probability of advocating for equality for sexual minorities, such as around issues concerning marriage and adoption.

When it comes to parliamentarians’ awareness of LGB issues altogether, the results are mixed. They indicate that the number of LGB members within a parliamentary party does not lead to a higher level of representation. For British MPs, the opposite appears to be the case. However, this does not necessarily mean that the awareness of LGB interests is lower in these parties. Instead, the division of labour that characterises modern parliaments can lead to lower levels of substantive representation – in other words, it may be assumed that LGB members will act as spokespersons for LGB rights.

The number of same-sex households in the politician’s region also has a positive influence – the higher the number, the more likely it is that the parliamentarian will actively stand for LGB interests. Given to the relatively low number of LGB citizens compared to those of other minority groups (e.g. members of ethnic minorities), it is more plausible that it is awareness of their interests rather than electoral calculus that leads to this higher probability. In contrast, the presence of LGB-supporting organisations in the parliamentarian’s constituency has no influence.

The results show that being (and coming out as) LGB significantly increases the probability of a parliamentarian to stand for the interests of sexual minorities. Moreover, non-LGB parliamentarians become (more) aware of LGB interests and their significance if they are in contact with LGB citizens. This relationship can then result in substantive representation by people who are not directly affected by particular issues. In line with this, parliamentarians who value social equality are also expected to represent LGB rights. However, awareness and values can only partially balance the numerical underrepresentation of LGBs legislators. This might change if the issue of equality for sexual minorities is increasingly brought even further into the political mainstream.

The above draws on the author’s published work in Parliamentary Affairs.

Lea Ewe Bönisch is a PhD scholar and lecturer in the Department of Political Science at Heinrich Heine University Düsseldorf, Germany. Her research interests include political representation and party research.

Photo by Steve Johnson on Unsplash.

The ongoing privatization of healthcare and the changing nature of employment relations mean that good psychological therapy is now only available to those who can afford it.